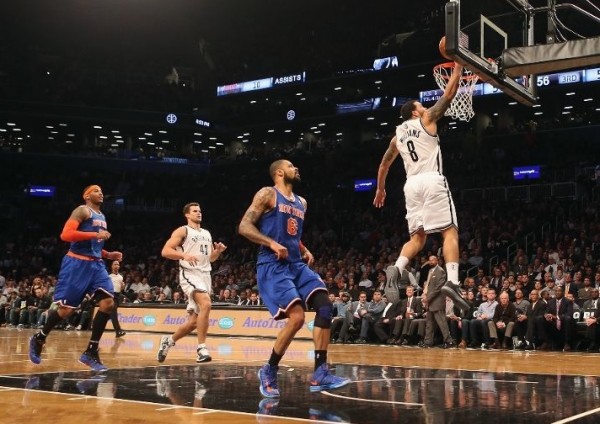 The theatrics were in play as TNT made sure we knew that this game was important. The characters were all in place. Hov and Bey descended to their rightful spot courtside. Hipsters, goons and working squares all filled the Barclays Center wearing their appropriate paraphernalia. The two teams provided the appropriate star power: Carmelo and Deron, Chandler and Joe Jeezy, Earl Smith, III and Reggie "Freeway" Evans. There was only one thing that needed to happen for this setting to be perfect; we needed an entertaining and competitive game.

That, my friends, is exactly what we got. Courtesy of Dime Magazine, the home court was protected on Monday night:

On almost every trip down the floor, Knicks and Nets fans competed, serenading each other with their own chants in an attempt to flesh out the competition. The action on the court lived up to the billing as well. As Brook Lopez went off for 22 points, 11 boards and five blocks, the Nets held off their crosstown rivals in overtime, 96-89. If Lopez is your best player as he was last night – regardless of how nice his numbers looked – we feel like there’s a limit on how good you can be. But when you’re going up against a two-man team, and you’re getting help from just about everyone (Deron Williams dishing 14 assists, Reggie Evans (14 boards) dominating the glass, Gerald Wallace earning his stripes as the team’s energizer, heart and muscle, and Jerry Stackhouse doing everything you wouldn’t expect out of a 94-year-old), it makes a W come a little easier … On the other side, Carmelo Anthony (35 points, 13 boards) was a savage after the opening quarter. Once the Knicks ditched an awkward big lineup to start the game (and it destroyed ‘Melo’s first quarter flow, where he’s been ripping teams apart all season with 11 points a night in that quarter), Anthony was a machine. Also, Tyson Chandler missed one shot, finishing with 28 points, 10 rebounds and one manhood-stealing putback dunk on Lopez’s head where he climbed up the staircase nestled into the Brooklyn center’s back. But other than those two, the rest of the Knicks shot 10-for-47.

One time for the All-AARP squad that was on full display on Monday night. From Rasheed Wallace, Kurt Thomas and Marcus Camby, to the "Never Can Say Goodbye" King Mr. Jerry Stackhouse, everything felt right about watching basketball in Brooklyn on a Monday night. Even Chuck and Ernie seemed pleased on Inside after the game, like they were gleaming with pride after the event that just took place.

It's not to say that last night was perfect. The crowd is still figuring out how to be more Oklahoma City-like, (long way to go) the game had its moments of sloppiness (Hi Ray Felton) and neither of these teams seem ready to surpass Miami as of today. But who knows, maybe the crowd will get that "BROOOOK-LYN" in order and make it rain with authority when the playoffs come. Maybe Jay-Z will get the real Freeway to sit courtside and look like Reggie Evans' doppelganger while Evans grabs 20 rebounds. What if the Big Russian decides to come through the half-court circle with a tiger and wearing gold-plated moccasins? I feel like all of these things are in reach, so long as we get more Biggie music playing in the process.

One Reply to “BROOOOOK-LYN: The Knicks Vs. Nets 'Rivalry' Was Fun Last Night”