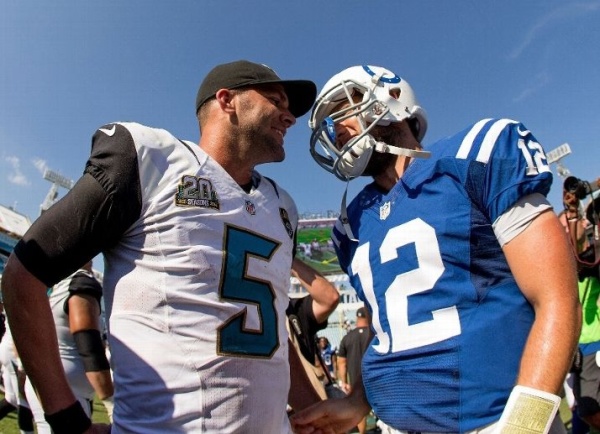 The score was 30-0 at halftime, and everyone was fed the hell up.

The Jacksonville Jaguars were getting curb-stomped by the Indianapolis Colts on an otherwise beautiful Sunday afternoon in Northern Florida. The Colts, with their crowned wonder boy in Andrew Luck slanging the pill all around the field, and the Jaguars, with Chad Henne doing everything in his power to set the quarterback position back 100 years, were putting on an exhibition on what both good and bad football looks like. Even Colts fans looked at the situation and felt bad for Jaguars fans, as Indianapolis supporter Kris Rothstein so eloquently noted on Twitter:

@edthesportsfan this is what you deal with every Sunday ? Lord. God bless.

See, I was on board with the Gus Bradley Plan. That plan was a simple one. The Jaguars' first-round 2014 draft pick, former University of Central Florida stud quarterback Blake Bortles, would not be pressed into duty until the NFL's second-youngest team gelled offensively. From the offensive line coming together to the wide receivers learning how to correctly run the route tree, there was no way in hell Bradley was going to throw his prized possession to the wolves so he could be battered and beaten into mush. No, the plan was to let Chad Henne manage the offense until everything was in place and then let Bortles take the reins.

Unfortunately, that plan went down like a sinking ship, rapidly. With 30-0 staring you in the face and the offense regressing faster than my chances of having an excellent hairline, Gus Bradley had no other choice. Blake Bortles was going to have to learn on the fly. Early in the third quarter, with social media quietly buzzing about a quarterback change, the Jaguars replaced QB #7 with QB #5.

The offense seemed like it had some life. The first Blake Bortles drive ended in a punt, but it also lasted eight plays and included three plays of 10+ yards, albeit one was a Bortles scramble for a first down called back by a penalty. Suddenly the team seemed as if they could pass block just a bit better, seemed like they could run the ball a bit more effectively.

Yes, the Jaguars fan base gave Blake Bortles another standing ovation for a drive that ended in a punt. That's how bleak and terrible the Jaguars offense had looked. That's how despondent the fan base was. Two first downs on a drive made 50,000 in Jacksonville stand up and show their appreciation for the future.

What matters is that hope and faith have been restored in the Jaguars fan base. Paying the $300+ for NFL's Sunday Ticket suddenly feels worth it again. Belief is the most dangerous thing you could ever give to a sports fan, but that's what the insertion of Blake Bortles into the starting lineup for the Jaguars has done for anyone affiliated with the black, teal and gold. We officially believe again.

One Reply to “Witnessing The Beginning Of The Blake Bortles Era”