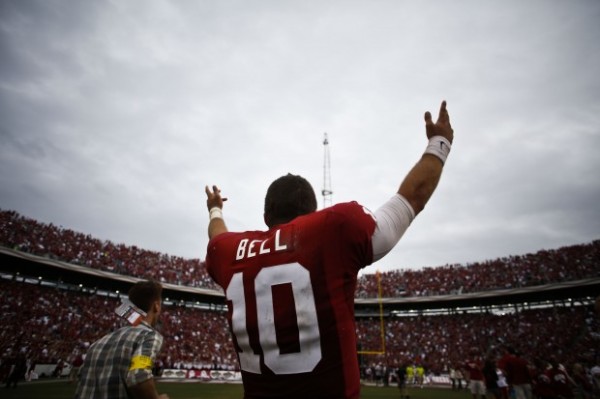 Cam Newton, the then former Florida Gators quarterback, was polishing off his all-world skills as a signal caller at Blinn Junior College. The man who would eventually become the #1 most recruited player in his class, be it out of high school our JUCO, had earned the trained eye of Bob Stoops’ desire. The physical gifts were astounding, but the play-making ability and field awareness are what sparked Stoops’ interest even more. Getting that extra yard, wearing that bravado on his chest, showing some cockiness … they were things that had been missing in the crimson and cream football team in Norman. Stoops was convinced that Cameron Jerrell Newton would take his talents up north to the other side of the Red River.

Auburn would eventually earn Newton’s services in the end and a Heisman Trophy along with a national championship, while Stoops would be left to wonder “what if” with Newton. Would the spread option work for the Sooners? Could “the swag” be infectious? This is now another Oklahoma pipe dream along the lines of James Harden still being in a Thunder uniform and Danny Manning’s knees blowing out during the 1988 NCAA Championship between Kansas and Oklahoma.

This article isn’t nearly as much about the potential of Blake Bell becoming the second coming of Cam Newton as it is more of a hope and dream that Bob Stoops can have Bell change the culture that Cam Newton helped alter while leading the Auburn Tigers to a national title. Or a Tim Tebow while at Florida, or a Vince Young at Texas. Someone so dominant of a personality and so talented as a player that players take to the culture shift and embody the movement.

In two years serving as the backup quarterback to Landry Jones at Oklahoma, Bell completed just 1o of his 20 passes while managing to throw an interception. Of course, America got introduced to Bell more formally as he transformed himself into The Belldozer by running the read option offense near the goal line, amassing 24 touchdowns in the process (for perspective, Bell’s currently 10th in rushing touchdowns in OU history since 1977) and taking a putrid and woeful goal-line Oklahoma offense to one of the league’s best the last two seasons.

That type of performance is eerily similar to the emergence of Tim Tebow, when he served as the backup quarterback to the forgotten legend that is Chris Leak, as the Urban Meyer-led Gators won the national championship in 2007. Leak driving them down the field, and Tebow punching it in for those necessary touchdowns. That confidence would continue to grow and grow, and the Tebow phenomena would essentially begin the following season when the starting job was his to own. Another national championship would be won, and the legend of Tebow would continue to grow. Even if he is now just a journeyman quarterback on his third NFL team roster.

Is this too much to ask of Bell? To be Cam? Tebow? Vince? It’s not like we’re putting these insane possibilities on the shoulders of a quarterback whose greatness wasn’t previously perceived. Well, the kid is 6’6″ and 260+ pounds. He can run like the wind and can sling it a country mile. Bell was ranked as the No. 6 pro-style quarterback coming out of high school in Wichita, Kansas. He has the football pedigree, as his father and his uncle both played in the NFL. Most importantly, he’s already proven that he’s capable of being something, even if that’s a battering ram for touchdown scoring for the OU offense.

However, this is as much on Bob Stoops and his belief systems as it is on Bell. Will Stoops be willing to conform from his ways of relying too much on his vaunted spread offense and get back to being committed to running the ball, wearing the opposing team down and playing to finish teams off? Will Stoops be the savvy gambler he was once known to be? An evil genius of relentless blitzing, trickery in the special teams and a flair for dramatic in the offense? This is really the last straw for Stoops, but a necessary change for him, because while having quarterbacks who can throw for 400 yards and five touchdowns a game is cool, it has proven to be predictable and fallible in the big games for Oklahoma. This must change, or there will be some smoke in the state of Oklahoma.

Blake Bell must be the catalyst of change for the Oklahoma Sooners, or else more change will be in order very soon in Norman.

by Eddie Maisonet, III time to read: 2 min
Ed The Sports Fan Because Some Of You All Forgot How Great LenDale W…
Football The 2013 Edition Of The Real Top 10 Quarterbacks I…
4