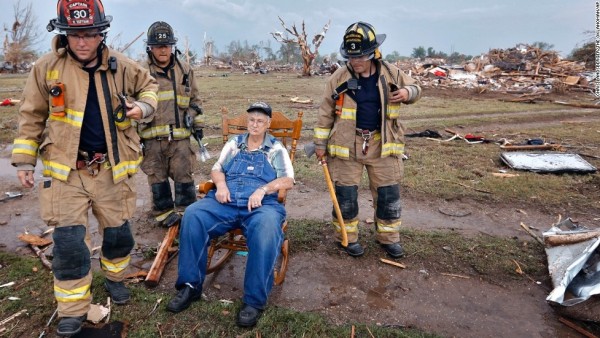 I had a job interview on Monday afternoon.

With my corporate square suit on, my wingtips shined up and my game face ready to roll, I was headed to a second-round interview with an organization that would hopefully like to pay me for my services. Seeing that I wanted to focus on the individuals in front of my grilling me with questions about my past work experience and where I see myself in the next three to five years, I knew it would be wise to eliminate all distractions. Therefore, I did the one thing I do less frequently than eating my vegetables consistently (sorry, Mom): I turned off my phone.

Then I turned my phone back on.

27 text messages. 11 missed phone calls. Tweets. Facebook Messages. Voice mails. Emails. You name it, it was waiting for me on my phone.

I knew immediately that something was wrong.

There's nothing like being from Oklahoma, especially if you have the chance to move away from Oklahoma. Reason being, most people have never met folks from Oklahoma, much less know anything about the state of Oklahoma outside of our sports teams. Yes, folks know about the Sooners, Cowboys, Golden Hurricane, Lions and most recently the Thunder, but about the actual state? Not much. So yes, I could spend a ton of time preaching the gospel of the state's Native American heritage, the history of Black Wall Street, the Cowboy Hall of Fame and the greatness that is Will Rogers, but that's a different topic for another day. My point is, being an Oklahoman away from home means being the unofficial ambassador of home.

So when these hellacious tornadoes came ripping through the heartland, ravishing through towns like Moore, Norman, Little Axe, Newcastle and Shawnee, folks hit me up concerned if my family was affected. As simple as this sounds, once I knew where the tornadoes hit exactly in the state, I wasn't worried. My hometown, Lawton, was a good 80-100 miles southwest of where the devastation touched down, and I knew immediately that my people were safe and sound.

Still, the fact that folks were so concerned meant a lot, and I'd soon realize just how significant the devastation would actually be in the Sooner State. 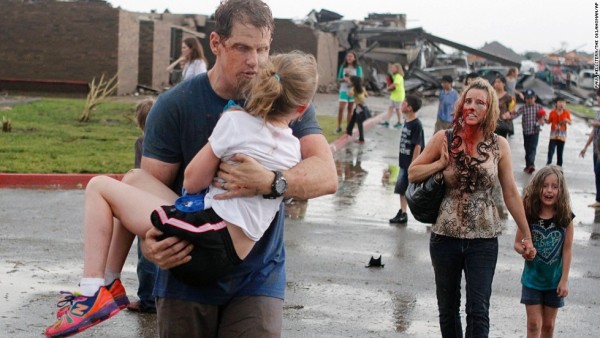 "How do we explain this to the kids? How are they going to wake up tomorrow and everything's missing — the school, these houses, their friends. In an instant, everything's gone."  — Oklahoma resident Norma Bautista

The Oklahoma Medical Examiner's Office, according to ABC News, said 51 people have been confirmed dead, of which at least 20 are children. Another 40+ bodies are currently being held to be identified and presumed dead. More than 100 casualties are being treated at area hospitals. The preliminary rating of damage created by the tornado is at least EF4 (winds 166 to 200 mph) — the second-most severe classification on a scale of zero to five — according to the National Weather Service. The tornado was estimated to be at least two miles wide at one point as it moved through Moore, KFOR reported.

In my 23+ years of living in Oklahoma, I've done some stupid things in my life. One of things that was the most stupid was to chase 'Naders. This is what happens when you're on a baseball team with an adventurous bunch of teenagers that are about that life. So I can remember riding down ole Highway 82, going through Indiahoma and Cache, hitting a gravel road or three to get up close and personal with these wind storms from hell. In one respect, watching a tornado off in the distance is a beautiful thing. I can vividly remember a time where the sun was setting in the background; a light drizzle of rain hitting us ever so subtly; clouds colored with a mix of white, gray and black; and a swirl of evil doing what it will off in the distance. In another, there's a real sense of fear you have, feeling the power of mother nature letting loose on the land. The wind is overpowering, the rain fluctuates drastically and the moments of still quiet ... are eerie.

What I've come to realize is that not only am I incredibly lucky after performing such a stupid act by going towards the tornadoes, but in reality I never was impacted by such a severe tornado as what transpired on May 20, 2013. I'd never been asked if my family had been impacted before. I'd never had to worry about friends living in affected areas to see if they were okay. It'd never hit so close to home, even if I wasn't home.

The state of Oklahoma has had to deal with its own set of tragedies in its storied history. From the Great Depression, to the Tulsa race riots to the OKC bombing, Oklahomans have suffered through their fair share of crises. What I do know is that much like the folks in the New Orleans area before with Katrina, the folks in Tennessee hit with floods, the folks in New Jersey who dealt with Sandy and any other region where natural disasters have hit people the hardest, Oklahomans will rally together and persevere. Homes will be rebuilt, farms will be put back together and communities will be reformed. Moreover, people from across the country and the world will pool their resources together to help out as well. It's the American way.

If you feel compelled to help out the folks impacted by the Oklahoma tornadoes, there are a variety of things you can do to assist. Say a prayer, pick the phone and call a friend, or make a donation. Anything you can provide is a huge help.

6 Replies to “Being From The State Of Oklahoma, Tornadoes And Persevering Through Tragedy”