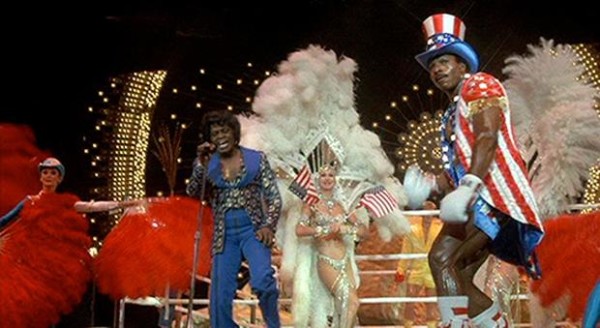 I don't know who the cable programmers are, but they definitely know what they're doing. Here I am, trying to get some work done on a typical Tuesday night, and as I'm going through some paperwork and scanning channels on my television, what movie comes across my eyes? Rocky III. All of a sudden I'm just cussing and fixing myself a drink, because although the movie is 38 minutes in, I already know what's about to happen. I'm going to watch ever minute of the movie. Text two of my boys who also love the Rocky series, and waste away the rest of my evening.

So here I am, watching Rocky III. Rocky utilizes the "Rope-A-Dope" technique on Mr. T, as the third movie in the Rocky series hijacks the entire fight story from Ali vs. Foreman in 1977, and as the movie ends I think....oh, now I'll go to bed.

Then Rocky IV comes on. Got damn.

I knew I wasn't going to sleep at this point, as the clock struck midnight and I knew I had to stay up for one of the greatest boxing performances of all-time. Because with all due respect to Prince Naseem Hamed, James 'The Grim Reaper" Roper and "The Heartbreak Kid" Shawn Michaels...there's never been a showman in sports quite like Apollo Creed.

From having 5 nicknames (The Master of Disaster, The King of Sting, The Dancing Destroyer, The Prince of Punch, and The Count of Monte Fisto) to having a gift of gab that was second to none. (The man is named after the Greek god Apollo, who was the god of prophecy. You all did read Homer's The Iliad, right?) From being impeccably dressed (This man made patriotism look awesome as hell) to being a true man of the people (You've heard of this movie, Rocky? Right?) everything was about putting on a show for Apollo Creed.

So when The Big Russian a.k.a. Ivan Drago and his Siberian entourage went on their tour of the Americas to proclaim that the Soviet slugger was worthy of crown as the world's best boxer, Apollo Creed wasn't having any of that. Apollo got the crew together one last time and said that he would show the world that Drago would essentially be chump change. However, he knew that he would need to enlist the help of one of the greatest Americans our world has ever known. James Brown.

For five minutes, Apollo Creed felt like a young stallion again. The Cold War between the United States and the U.S.S.R. felt like a distant memory.  Venereal diseases were a thing of the past. Prince was coming out with a new album. Life was good.

Yet, soon after the legendary cape hit the back of James Brown, tragedy was soon to come. Rocky got Apollo killed.

But hey, in the true spirit of America, Apollo Creed sacrificed for us to give America the greatest entrance of all-time. We'll never forget you Apollo, because we're all Living In America.

Related: Tommy Morrison, Tommy ‘The Machine’ Gun, AIDS And The Death Of A Complicated Champion