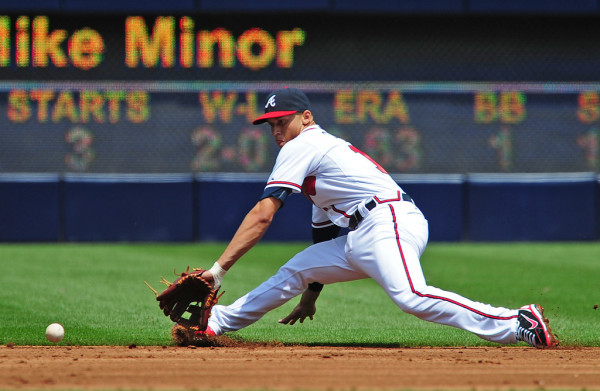 "The only security a man can have is the ability to do a job uncommonly well." — Abraham Lincoln

When the 16th president of the United States said those words, I'm pretty sure he didn't think he'd be talking about a Curaçao-born baseball player and his work. Hell, I don't think baseball was even being thought of very much in the mid-1800s, but whatever. This is about way more than the game-saving throw he made to save the Atlanta Braves and their slim playoff hopes on Wednesday night in a 3-2 win over the New York Mets. This is about the best defensive shortstop in the world, and his name is Andrelton Simmons.

Simply put, there isn't a player in today's game who combines an arsenal of defensive skills as diverse as Simmons'. From his cat-like reflexes to this cannon arm to his natural fluidity around the infield, watching #19 is an absolute treat … but that's still not enough.

Andrelton Simmons is the man because he makes this stuff look easy. No movement he makes is overly complicated, just timely and efficient. Somehow, he makes fundamentals look supremely cool, and he makes the impossible seem very possible. Take, for instance, what he did on Tuesday night when Travis d'Arnaud thought he gave his Mets a chance to win the game, only Simmons had something to say about it.

You don't get the chance often to watch a master ply his craft, but with Andrelton Simmons, I get pretty close. In my lifetime, I can say that the best defensive shortstops I've ever seen are Barry Larkin, Omar Vizquel and Ozzie Smith. When I watch Simmons play, he reminds me of the Wizard more than anyone else. I don't know if it's blasphemy to think that, but I don't care. I know Simmons is great, because I've seen it before. So has former Ozzie teammate Terry Pendleton.

"He just has a knack for it. And you see when something else goes on, he's always thinking about the next thing. Or there's a play over here and he's thinking about what he can do with it. And those are the things that I watched Ozzie Smith do. And I'm quite sure, at Ozzie's age, he's doing the same thing." — Former St. Louis Cardinals and Atlanta Braves third baseman Terry Pendleton

At a time when folks complain about baseball not being able to carry one's attention, there's no taking your eyes off of Simmons. Anytime Atlanta plays, I hope plenty of grounders and liners head his way, even though I know he's going to make the play.

Related: Could A Moment In Modern Sports Ever Match Henry Aaron’s 715th HR?