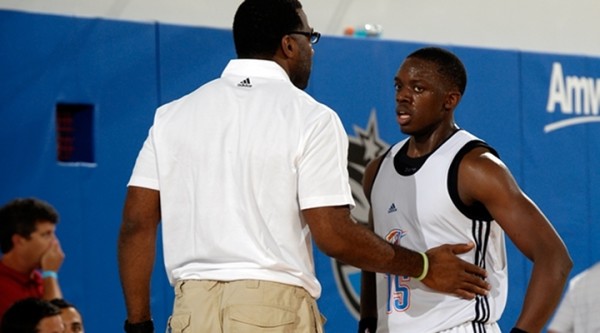 You know it when you see it.

When you see a garden of flowers, and one flower just sits taller from the rest. A crisp dollar bill in a group of crumpled and wrinkled bills. A fine ass woman with a group of regular women.

They all have a way of standing out.

For Reggie Jackson, a 3rd-year guard for the Oklahoma City Thunder, the NBA's Summer League has been his professional playground. Saddled on the bench for two years of a NBA title contender, Jackson's only chance to show his real ability has been in the two weeks of proving ground that takes place in Orlando and in Las Vegas during the heat of July. He shocked the world in the summer of 2012, showing off his ability to distribute and finish, and he hasn't let up in 2013. Per Royce Young of ESPN's Daily Thunder, RJax put up 23 points in the 4th quarter in OKC's summer league win over Detroit:

REGINALD. He scored or assisted on 26 of OKC’s final 28 points. He went 7-7 in the fourth for 23 points and an assist. At one point he scored 18 straight. And here’s the best part of it: He did most of his damage with the jumper. That’s been the top thing holding him back from really exploding as an offensive player. He can get to the rim and he can finish. But he’s needed to find a mid-range or perimeter jumper to keep defenders honest, and punish them when the favor his drive. Once he splashed his first 3, it was on. He started attacking with complete confidence and just kept going and going and going. It’s Summer League, and he was torching Kim English and Peyton Siva, but still, that was something very encouraging to see. As Thunder fans fret about OKC’s bench and who the team didn’t sign this offseason, it’s pretty obvious the Thunder have a potentially special weapon already in Jackson.

As the Oklahoma City Thunder resident here at TSFJ, let me say that seeing Jackson go off like this is no surprise, and he gives me legitimate hope that OKC still has real room to grow as a title contender. Jackson flashed his star potential when Russell Westbrook collided with Houston's Patrick Beverly* and suffered with a torn meniscus, thus forcing RJax into action. If this summer league action proves anything, it's that head coach Scott Brooks has to be willing to put more on Jackson's plate, and lightening the load on Westbrook and Durant just a little could mean a lot in the long run.

Here's the video of Jackson's demolition of the Pistons. (Poor Peyton Siva) Hopefully we'll get some of these highlights in the regular season and the postseason as well.

*Patrick Beverly, the beef ain't over cuz. If we see each other in the streets, it's going to be some furniture moving around. Oh, and we got Tonya Harding on the payroll, and you see what she did to Nancy Kerrigan's knees, right? Protect ya neck...and your knees too.

3 Replies to “All Hail Reggie Jackson, The King Of The Summer League”