With all due respect to Hoop Dreams, White Men Can’t Jump, Blue Chips, Love & Basketball, and He Got Game, the greatest basketball movie of all-time is Above The Rim. This is not up for debate, mostly because this is my opinion and I’m always right. The reality is, I’ve watched Above The Rim too many times to count and I’ve formulated opinions about the movie that cannot be disputed.

There’s no question that Tupac put on an Oscar-worthy performance in his role as Birdie.

There’s no question that Above The Rim is one of the greatest soundtracks of all-time.

There’s no question that even I could dunk on those 8-foot rims during the game footage.

My best guess is that I’ve watched the film 438 times. I know everything there is to know about the movie. Here are a few tidbits off the time of my head:

However, while watching this film for the 438th time, I noticed something that I’d never noticed before. During the final game between the Bombers and the Birdmen, Birdie’s (Tupac) squad was running amok on Kyle Lee Watson’s Bombers like the 1988 Detroit Pistons. Before Thomas Shepherd could come in and save the day in his legendary corduroys, I stumbled across the greatest basketball play of all-time. Let’s watch the glory together.

Let’s reflect on this wizardry.

Look, I understand what some of you might be thinking. This is a poorly edited film. (Which, if you wanted to make the case that this movie can’t be the best basketball movie of all-time, I can hear your argument. However, I’ll never agree with you.) Yes, this was a poor edit, however, I prefer to live in a world where suspending all belief in reality can happening when watching basketball movies.

In conclusion, a big shoutout to director Jeff Pollack, New Line Cinema, and most importantly, #52 of the Birdmen. You’re the real MVP bruh, because you gave the world the greatest basketball play of all-time. Salute.

Related: Here’s why Above The Rim is the greatest movie of all-time.

9 Replies to “Here’s The Greatest Basketball Play Of All-Time You Probably Missed, Courtesy Of Above The Rim”

Here’s The Greatest Basketball Play Of All-Time You Probably Missed, Courtesy Of Above The Rim 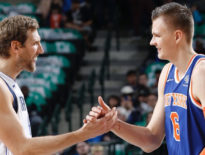 Basketball Next To Greatness: How Kristaps Porzingis Benefits…
9