Andre: You know nothing about fantasy football.
Rafi: Sure, I do. I just don't understand why you won't let me draft the players I want to play. It's fantasy football, so the Hulk should be able to be on the team.

Man, you ever look at your fantasy football apps on your phone and just give up on everything? In the three leagues that I know you don't care about, I got beat by 120 points, 70 points and 1 point. You know which one crushed my soul? Of course, the one point loss. I deleted the fantasy football apps off my phone because I knew if I didn't I'd keep looking at my roster in disbelief. This is all Roddy White's fault. (Explanation coming...)

Welcome to Week 3 of our fantasy football therapy hate session.

Here at TSFJ, we like to provide a platform of therapy for the people. Sometimes a good “woosah” can be all the difference in getting something off your chest and moving on to the next week. Plus, we know that you’re tired of hearing people say, “no one cares about your fantasy team.” That’s not true — we care. (Kinda.)

As always, we have done the grunt work and reached out to our friends and family to find out who the players are that folks ABSOLUTELY HATED with all of their fantasy football souls in Week 3. Enjoy.

I don't even play fantasy football, BUT OH MY GOD COLIN KAEPERNICK. Kap's two pick 6's (TWO!) helped pave the way for the Cardinals defense outscoring the 49ers' offense 16-7. If you have Colin Kaepernick in fantasy football, drop him posthaste. The 49ers coaching staff has no idea what they're doing (shocker). Jim Tomsula said that this team is not built to be a drop back and pass team, despite the fact that that's what Colin Kaepernick spent his entire offseason working on. This is a red flag for Kap fantasy owners. So is the 49ers' offensive line that is made up of two traffic cones, a Joe Staley bobblehead, an old jar of mayonnaise and one of Jed York's GI Joe's. So is the fact that Colin Kaepernick is terrible at football. He's done. The Kaepernick experiment is over and it's going to bone the 49ers. Hard. So make sure it's only boning them and not your fantasy team too. Now make like opposing pass rushers and drop Colin Kaepernick. (Alternate joke: Make like Vernon Davis with a Colin Kaepernick pass and drop him). *Kisses bicep* -- @MadSports8

Oh, Colin. So tantalizing. You run so fast, you throw so hard and so far, you speak so confidently on social media during the summer... AND YOU ABSOLUTELY SUCK AT PLAYING QUARTERBACK IN THE NATIONAL FOOTBALL LEAGUE. Maybe I should just be thanking everything holy that Fantasy Football doesn't subtract extra points for a pick-6, so at least you didn't finish with a negative score total; then again, if you hadn't run for that one touchdown you WOULD have finished with a negative score. A QUARTERBACK. WITH A NEGATIVE SCORE. It's hard to find the right words to describe how pathetic that is, but I can tell you this for certain -- a quarterback scoring 5.2 fantasy points does NOT a winning week make. Not only did you throw some of the ugliest, lamest ducks I've ever seen directly to defenders, but you somehow managed not to break 70yds passing in this travesty. At least last week when your defense gave up 40, you took advantage of an entire half of garbage time to pile up yardage. This was the most pathetic QB effort I've seen in a long time, and Jimmy Clausen started for my favorite team this week. Maybe next summer when you go work with Kurt Warner you should get some tips on grocery-bagging, because I think you've got a better chance at making it in the local Safeway than on an NFL field. -- @thekolsky

Something's up with Colin Kaepernick. He's got that depression hair and beard going on.

7torms coming, huh? Well the only storm I see in the Bay Area is the steady stream of tears down the eyes of the 49er faithful realizing that their “Quest for 6” lays in the hands of a faster Tim Tebow with a stronger arm. Seriously, do you realize that there is a strong contingent of Niner that would rather have Alex ‘Safety Valve’ Smith as their quarterback. And that was before you threw not one BUT TWO PICK 6s IN THE FIRST HALF ON THE SAME PLAY!! Dawg, we’re tired of your wack shoe collection, your corny press conferences, and most importantly, your tired game. Get this Nipsey Hussle look-a-like out my face. -- @Logan_Murdock

The Detroit Lions have Matthew Stafford, Calvin Johnson, Golden Tate, Ameer Abdullah, Joique Bell and talent all over the field. Yet their kicker couldn't even get one lousy point? Not a one!?! He had an extra point blocked…and that was the extent of his night. I guess I should be pissed the Lions couldn't pull of even a field goal attempt, but screw that. You had an extra point blocked! Screw you, Lions – especially Matt Prater. -- @RevPaulRevere

Listen up you whiny, overpaid, washed up, shell of his former self, no catches receiver. I took up for you during your issues with your former team. I just knew you would return to greatness with a guy like Andrew Luck tossing to you. But noooooooooo, you want to have 7 receptions in three games. In the one time you were targeted in Week 3, you dropped it! Who ARE you?

"I'm here to win. I don't play fantasy football." -- some elderly wide receiver for the Colts.

Well guess what, Andre Lamont...I do! I want to win too! I want to win my fantasy match-up and you're not allowing me to do that. I think I'm even more angry because even with this pathetic start to the season I just can't let you go. Why must we be in this tortuous relationship? I reminisce on the good times we had when I won week after week because of you. I know how good you can be to me. But like the great Janet Jackson said, what have you done for me lately? You've got one more week to prove to me that you're not really 87 years old and are actually valuable to my life. If not, we're through. Forever. (Or until next season if you actually show up the rest of the year appropriately after I drop you.) -- @MsLightBright 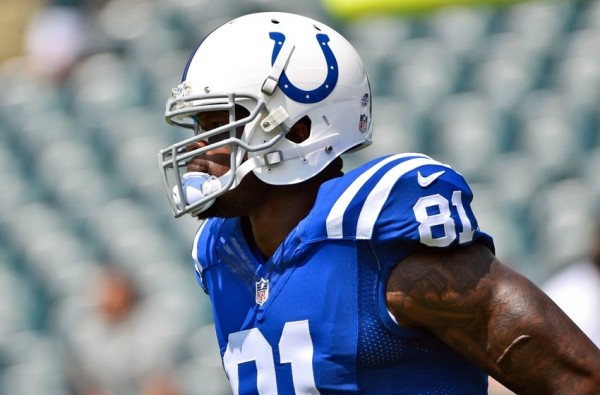 Bruh, you've been waiting for this moment since you've entered the NFL. Andre, you are playing with a top quarterback after years of playing with the Shane Falco's and Camp Rooney's of the world. To be honest, it's not all of your fault. Andrew Luck threw one pass your way. You mean to tell me out of 30 attempts only ONE came your way. I know this isn't 2009, but you are ANDRE JOHNSON. In due time your numbers will come, or will they? I was a little leery about drafting you, but I said come on we are talking about the man who's been of the best at his position for years. Andre, my team needs you. Week 4 is coming up, just pretend Courtland Finnegan is on the opposite side of you so you can morph into the beast that we know you are. -- @Ron_Hamp

Dear Terrance Williams, in case you hadn’t read the news lately allow me to catch you up to speed. Dez Bryant is out for [insert inaccurate number of weeks here], so you my friend are the Cowboys’ de facto number one receiver. HOW ON EARTH DO YOU AMASS ZERO CATCHES?! Here is a list of the Cowboys players who DID manage to catch a pass from “Old Man” Weeden: Jason Whitten, Two Running Backs and Buddy Lembeck from the hit 1980s sitcom, Charles in Charge. I just looked at your line again, and in the average yards column It says “N/A”. Does this bother you? Do you even care? Dez would be coming at someone on the sidelines like a spider monkey at this point. Imma need you to pick it up champ, I have you on my roster in three leagues. -- @ccdavisjr

Listen, Terrance, this is it. I’ve had it with you. I stuck with you the past few seasons in my PPR keeper league because you’d come up with some pretty consistent stints … until last year. But I still believed. All I heard about was the chemistry you were building with Tony Romo and how this season was going to be the one in which you took your game to the next level. So when Dez Bryant went out, I expected big things. Shit, even with Romo out and Brandon Weeden at QB, the world was yours. Jason Witten is banged up. Dez is gone. And the other receivers in Dallas are nobodies. WELL IT TURNS OUT SO ARE YOU, YOU FRAUD! Zero freakin catches, just like Matt Prater put up zero freakin points. All this with my best team in my most expensive league all set to go 3-0 and take first place … only Terrance Williams and Matt Prater put up goose eggs and I lose by 9.48 points. As if I needed any more reason to hate the Dallas Cowboys. Go away, forever. -- @RevPaulRevere

You know what? This isn't even your fault Roddy. There's nothing I can do about you looking absolutely washed up and somehow ruining all of the rapport you built with Matt Ryan. Coming into Week 2 of this season, you caught at least one pass in 130 straight games. Surely, not catching a pass in week 2 was an aberration, right? Bruh. You've played on 121 snaps over the last two weeks. You've still caught zero passes. Man...what? How is this even possible? I...sigh. (Goes to ESPN and Yahoo! Fantasy and drops Roddy White on all of my rosters.) -- @edthesportsfan