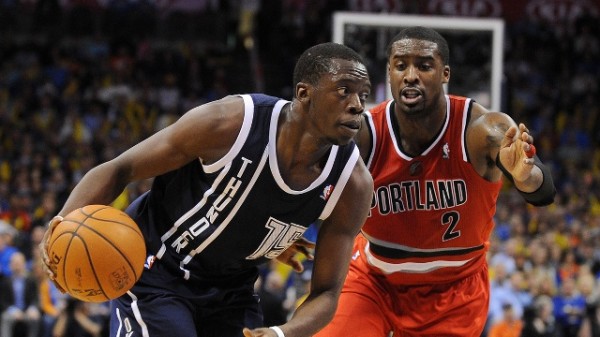 The former King of the Summer League, Reggie Jackson, walked into the Oklahoma City Thunder's visiting locker room on Thursday night as they prepared to play the Denver Nuggets. One of Reggie's pure joys was every moment he got to see his #15  'JACKSON' uniform sitting in his locker. "I'm official," Jackson said to himself. It's as if Jackson's confidence is boosted every time he sees that jersey sitting between that wooden stall. Of course, there's one exception to this rule for Jackson, and that's when the Thunder brass decides to make the team wear those egregiously hideous alternate uniforms.

"Got damn," Jackson muttered as he saw the familiar sight.

At this point, Jackson had figured out how to block this out of his mind during the game, finding something to be angry about and then using it as fuel for the game. But when the Thunder were in a timeout, he noticed Russell Westbrook sitting on the sidelines with a shirt that looks right out of the Gordon Gartrelle collection. Jackson looked at Westbrook's shirt and thought, "Good grief, even that abomination of a shirt looks better than this shit!" Jackson was fed up.

And then he got the ball right out the timeout.

Who knows, for the sake of seeing people get dunked on, maybe they should keep Reggie angry. Keep wearing those hideous alternate uniforms boys. We like writing obituaries around here.

Related: Kendrick Perkins May Or May Not Be Planning Kevin Durant’s Bachelor Party