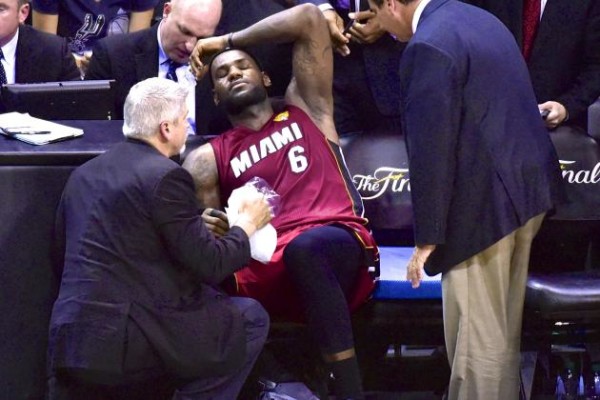 I don't know what the Miami Heat did to deserve what happened to them in the fourth quarter of Game 1 of the NBA Finals. Thursday night will forever be known as The LeBron Cramp Game, while Dwyane Wade continues to be the original teflon don and escape blame once again and no one on the Miami Heat seemed capable of playing defense for the last 12 minutes of the game. Everything went to hell in a handbasket for the Heat, literally, as the air conditioning was out and the San Antonio Spurs went into flamethrower mode to close the show.

When LeBron went out of the game with his leg looking as stiff as a surfboard, the game started cheatin' like a video game. Per SB Nation's Tom Ziller:

On its final 12 possessions -- of which LeBron was on the floor for one, and then only in a literal sense -- San Antonio scored 26 points. Please understand how totally ridiculous that is. San Antonio only came up empty on two of its final 12 possessions, and one of those was a missed jumper by Manu Ginobili right after LeBron and Chris Bosh hit the bench. The other was a Tim Duncan turnover. The Spurs missed one other shot in the run, but Duncan picked up the board and Kawhi Leonard nailed a veritable dagger of a three.

The result of "the game cheatin'" was the Spurs shooting 14-16 from the field, making all six of their three-pointers, completing 14 assists and scoring 36 points in the fourth quarter. Miami scored 17. Miami's defense went to mush without LeBron, and the way the Heat deflated like a balloon reminds me why there's only one real MVP in the NBA. Sorry, KD. The temperature in the arena was somewhere between 90 degrees and hell apparently, and more importantly, the Spurs somehow got turned into Super Saiyans in the AT&T Center.

So, What Did Ed Learn From Game 1 Of The NBA Finals?

I learned that the LeBron hate is very real and that there are too many people in this world who think that cramps are no big deal.

I saw the #LeBroning hashtag take place last night, and I chuckled. Then I saw it become a "thing" today, and I was saddened. Truthfully, it shouldn't even be called #LeBroning; it should be called #PaulPiercing but whatever. However, what's taken place from a commentary standpoint post-LeBron Cramp Game just proves to me that folks are just sitting there, waiting for LeBron to give them a reason to talk down on the man. What's worse is that I knew that the WWMJD crew (What Would Michael Jordan Do) would come out in full force against LeBron.

In a perfect basketball world, we would be singing the praises of the San Antonio Spurs pulling off the equivalent of beating Street Fighter II: Ultimate Edition with the difficulty level on 5/7 stars while only getting hit three times. Also, we'd be asking the question of how terrible Miami looked without LeBron and holding Dwyane Wade's feet to the fire. But we know that's not going to happen.

Oh, and for anyone who's saying that LeBron should've played through a leg cramp? I'm just going to assume that you've never done anything athletic in your entire life. Do better.

One Reply to “What I Learned From Game 1 Of The NBA Finals: The Spurs Put In The Game Genie For The 4th Quarter”