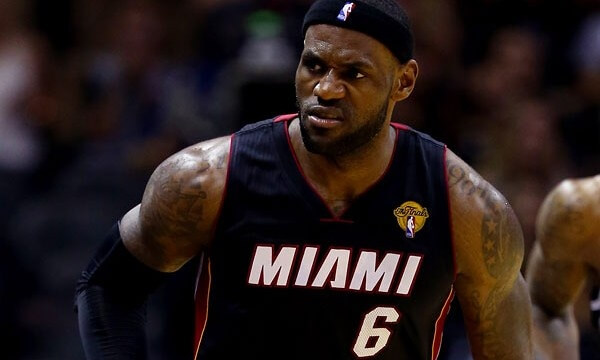 For the first quarter of Game 2 of the NBA Finals, I thought LeBron James was drunk on All Sport.

Do you all remember All Sport? It was a competitor to Gatorade and Powerade back in the day, and it was usually always the cheapest sports drink on the shelf at the corner store. There was no shame in getting an All Sport to drink, because hey, you gotta stay hydrated. But man, you'd drink that stuff, and then your teeth would be all sticky. At one point it was carbonated, and it'd leave you burping while running up and down the basketball court (not cool). Sometimes, your teeth and tongue would even transform into the color of the drink you selected. All because you wanted to spent 89 cents on a 20-ounce drink instead of spending the $2 to get an upgraded refreshment after sweating your life away.

LeBron James was 1-of-4 with three turnovers in the first quarter. He looked lethargic, tentative and, to a certain degree, it seemed like he didn't even want to be there. Then the second quarter happened.

The King would go on to score 35 points, 33 points in the remaining three quarters of action, going 13-of-18 in the process. Oh, and he accumulated 10 rebounds and put together a stretch in the third quarter of making six straight shots. It should be noted that this was while the Miami Heat's offense, and I'm being nice when I say this, looked like absolute shit. This was simply a case of get LeBron the ball, and give him a screen if he beckons you to do so. It was terrible to see from a basketball purist standpoint, but I could care less. LeBron was hitting the Spurs like Miguel Cotto was punching Sergio Martinez on Saturday night. San Antonio, while putting up a game effort, simply didn't have an answer for Raymone.

So, What Did Ed Learn From Game 2 Of The NBA Finals?

That maybe I should start taking 8:00 a.m. yoga classes every morning before I have important things to do in my life. Per ESPN's Brian Windhorst:

After a few days of overkill he was over it by the morning of Game 2. He showed up for an 8 a.m. yoga class at the resort, no doubt surprising the other three people who signed up. He was mellow. He would not be eating pickles or swallowing spoonfuls of mustard or the other home remedies. Yes, he knows to eat bananas to prevent cramps; he has been eating them every game day for years.

James didn't score 35 points in the Heat's 98-96 victory because he was driven by anger. He didn't feel like the AT&T Center was due some sort of vengeance. OK, maybe there was a little of that, but he didn't arrive feeling like he needed to even a score. Other than, of course, the score in the series.

He's so far past petty retribution by now, the kind of stuff that cluttered his mind when he was younger and more vulnerable. On Sunday, he just knew the Heat badly needed a win, and he knew the consequences of falling down 0-2. The only way to protect against that was to have one of his trademark playoff performances.

Could you imagine being one of the three people in the early Sunday morning yoga class? First off, who are these people getting up this early to do yoga on a Sunday morning? You're making the rest of us look bad — STOP IT! Anyway, I imagine when a 6'8" 260-pound man lumbers (or if you're Justin Tinsley, floats) into the room ready to do yoga, I have to think you're stepping your yoga game up a little bit. Those three lucky folks have a story of a lifetime.

As for us basketball fans,  we'll remember Game 2 as a reminder that LeBron James is the greatest basketball player to ever play in the 21st century and that from time to time the man gets cramps. You know why? Because he has to prove to us that he is in fact human every once in awhile.

I also reaffirmed my thought that Chris Bosh is who he is, and I love the fact that he's never apologized for being that quirky guy. Because sometimes, quirky guys will dunk on you.

Also, the San Antonio Spurs aren't going anywhere. Miami largely won this game by making it a scrum. Mario Chalmers elbowed the bejesus out of Tony Parker's ribs. Dwyane Wade out-Manu'd Manu Ginobili with his fantastic flop. LeBron James disrupted the Spurs by continuously attacking the boards and poor Kawhi Leonard, who fouled out early in the fourth quarter and was never a real factor in the game. We know Gregg Popovich will adjust, Tony Parker has yet to play a game worth a damn and sometimes Miami doesn't play great at home.

What I do know is that the series is tied 1-1, and we've got one hell of a series on our hands. Let the best team win, and we'll see you on Tuesday night.

5 Replies to “What I Learned From Game 2 Of The NBA Finals: Sunday Morning Yoga Helps LeBron Be OK At Basketball”