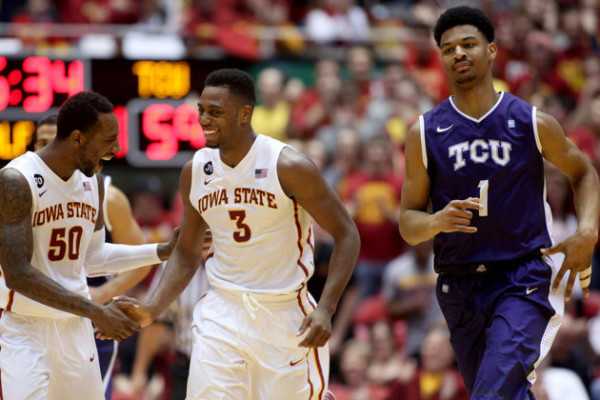 The Iowa State Cyclones got destroyed by the West Virginia Mountaineers 102-77 on Monday night.

Okay, now that we got that out of the way, can I just say that I've been making it a point to watch this basketball team every single chance I get? Have you seen these dudes DeAndre Kane and Melvin Ejim? How in God's name did the Cyclones get these two dope swingmen to come to Ames? I mean, DeAndre Kane sounds like the name of a villain in a future Mission Impossible movie, which is pretty awesome. Also, Melvin Ejim has an impressive box cut, which I usually find to be egregious, but somehow I find his haircut acceptable. Especially when you end up putting up 48 points and 18 rebounds in one game.

What's wild is, being a college basketball fan from Oklahoma, it seems like every couple of years the Iowa State Cyclones seem to produce a dope team and players out of nowhere. They'd always find a way to be a thorn in the side of the Oklahoma Sooners or the Oklahoma State Cowboys, and I'd find a reason to be upset with this team from Siberian Heartland. In reality, I have an appreciation of the Cyclones, and here's five guys that I admired the most:

Marcus Fizer: Before there was a Blake Griffin, Kevin Durant or a Michael Beasley, there was a man named Marcus Fizer. Fizer, a 6-8, 260-pound monster who for three years thoroughly owned the Big 12. No one in The 12 wanted a piece of Fizer, a bald-headed bull who was literally trying to dunk on everybody. He was terrifyingly awesome, and then Iowa State messed around and got themselves a point guard ...

Jamaal Tinsley: The original J. Tinsley (sorry Tins) was brought to Ames from junior college, and the Fizer and Tinsley tandem was arguably the scariest 1-2 punch in all of college basketball. Tinsley was the NYC point guard we'd always come to love, and all of a sudden Iowa State was pulling in consecutive 2-seeds in the NCAA tournament. (Sadly, this is the part of the show where I remind you that the 2001 Iowa State team led by Tinsley is the one that got upset by 15-seed Hampton and the band went ham in the stands.)

Fred Hoiberg: This man is currently the head coach of the Iowa State Cyclones. However, that's not really important. What's really important is that this man's nickname is The Mayor, which is one of the best basketball nicknames of all time. Oh, and he could shoot the lights out too.

Kelvin Cato: Honestly, Kelvin Cato was just another big man who made it to the NBA. However, Kelvin Cato gave us this in the league, which is arguably the most incredible dunk ever.

Royce White: Funny thing is, I still think this dude might find a way to make it to the league if he ever figures out a way to get over himself, but the man in college was fascinating. I can't explain how much I wanted to see him succeed. But, the man is batshit insane, and we're not here to fix it.

I have a feeling this Iowa State squad will be a real problem in the tournament this year, although they're gooey soft in the middle, but goodness gracious they're fun to watch. Make it a point to see them versus No. 19 Texas next Tuesday and watch these dudes ball out because ... well, what else are you going to do next Tuesday? Nothing.

Oh, and here are the important reads for your Tuesday enjoyment.

Those Ugly USA 2014 Olympic Team Sweaters Cost HOW Much?  -- With Leather

From The Elbow: On Jason Williams' Greatest Pass -- Classical

Aroldis Chapman: A world of his own -- ABC News

'The eagle has landed': The exclusive behind-the-scenes story of how Michael Sam came out -- OutSports

Oakland: the city that told Google to get lost -- The Guardian

What happens when you invite RGIII to your wedding? -- Washington Post

Smart skirmish with fan a sign of our devolving times -- Philly.com

One Reply to “Starting Lineups: Melvin Ejim, DeAndre Kane And The 5 Dope Hoopers Of Iowa State's Past”