Everybody want to be fast, see the cash
F*ck around they weak staff, get a heat rash
Anything in Bad Boy way we smash (we smash)
Hundred G stash, push a bulletproof E-Class (ehehe)
I'm through with being a player and a baller
Just want me one bad b*tch so I can spoil her
-- Puff Daddy, Can't Nobody Hold Me Down

Back in 1997, the thoughts of being a grown-ass man was a belief that I had the confidence to state that I was a grown-ass man to my mother. At the age of 13, I just started growing facial hair, I was becoming a dominant force on Madden on the PlayStation, I just started noticing girls, I was keeping my head in all things college basketball news, and I was all in on P. Diddy and the Family.

Diddy's first signature album, No Way Out, was an absolute collaborative masterpiece. Notorious B.I.G., Ma$e, Faith Evans and plenty others on Bad Boy's label were put their signature flair on the album, and few albums in 1997 gave off both bravado and brotherhood quite like this.

On their first single, Can't Nobody Hold Me Down, both Puff and Mase spent a combined three minutes and 50 seconds letting the world know that what others aspired to experience, they were out there living it. With Grandmaster Flash's epic sound blended in part by everyone's favorite Love & Hip-Hop star Stevie J, the track would be so infectious that it would take over the charts, culminating in a six-week run as the No. 1 single on Billboard's charts.

Let it forever be stated that while the North Carolina Tar Heels might've had the best players in the 1980's, and they might've had the most team success in the 2000's, UNC was never more cool than the 1990's.

The 90's blessed us with cable television delivering us college hoops throughout the week as ESPN began creating more channels, and major networks realizing that the weekend could bring in awesome ratings as well. We also saw the push by Nike to get their jerseys on sale in retailers in local malls like Foot Locker and magazines like Eastbay. Wearing a North Carolina jersey, with that gorgeous Carolina blue, in school could make you a popular kid in class, as guys were jealous and girls might raise an eyebrow. Most importantly, the players wearing the uniform were next level and jumped off our TV screens with swagger, bluster and absurd levels of confidence.

While Jerry Stackhouse and Rasheed Wallace set the table for coolness, Antawn Jamison and Vince Carter cleaned the table, put their feet up, and made themselves at home with the cool.

Jamison, a do-everything forward who put everyone on notice that he was the real deal as a freshman, came into the 1996-97 season as one of the best college players in the country. At 6'9", Jamison wrecked all foes by going to work in the post, pulling up for the elbow jumper, and generally getting any shot he damn well pleased. He was calm and confident, he made everything look easy, and was the baseline of success for all things Tar Heels related.

Then there was Carter, who showed flashes as a freshman but came on like lightning as a sophomore. By lighting, I mean radioactive energy that could be set off one backdoor cut or fastbreak drive at a time. Carter in Chapel Hill was raw and unfurled like Jimi Hendrix on a guitar solo riff. One minute he might dunk on everybody, the next he might pull a chase down block out a break outta nowhere. Moreover, Vince was a flexing hypebeast of a performer, and he was easy to become enamored with.

Jamison and Carter were the leaders of North Carolina's new school, fresh with baldies, beautiful uniforms and a dynamic style of play. The 1996-97 season would be a memorable one, which would include an ACC Tournament Championship, Jamison earning second-team All-American honors, and the young Heels making a run all the way to the Final Four. The legendary Dean Smith, who for nearly 40 years became the walking definition of North Carolina basketball, would blow the whistle for the last time for UNC. Smith retired after the season, handing his whistle and a loaded roster to his longtime assistant Bill Guthridge.

Biggie's death, one that took place just six months after Tupac was taken from us, was hard to process as a teenager. In terms of Bad Boy Records, with all due respect to Diddy, Biggie was why we all came. After Biggie passed, you could feel that weight put on Diddy's shoulders and it wore on him tough. Diddy said as much in his eulogy for Chris Wallace.

"Big made me feel like I could conquer the world. Everyday I wake up and pray that it's all just a horrible dream. But it's not. Big's gone."

Diddy's therapeutic release would be No Way Out, as the album would produce two number-one singles, one being "Can't Nobody Hold Me Down" and the tribute track to Biggie in "I'll Be Missing You" featuring Diddy and Faith Evans, Biggie's wife. Moreover, two other singles, "Been Around the World" and "It's All About the Benjamins", would climb to No. 2 on the charts as well. Meanwhile, Biggie's greatest verse of all-time might've been on "Victory" with Busta Rhymes and Diddy providing one of the best hip-hop motivational track of the decade with Rocky samples in the back.

Biggie had laid the groundwork for Diddy, and Diddy knew what to do from there. Similarly, when Dean Smith walked away from North Carolina, he'd left it in good hands (for the most part, sorry Matt Doherty) as Guthridge and eventually, Roy Williams, would make sure things kept rolling. Guthridge, who never thought he'd be a head coach, would make the Final Four the following season with Jamison and Carter returning bigger and better than ever. 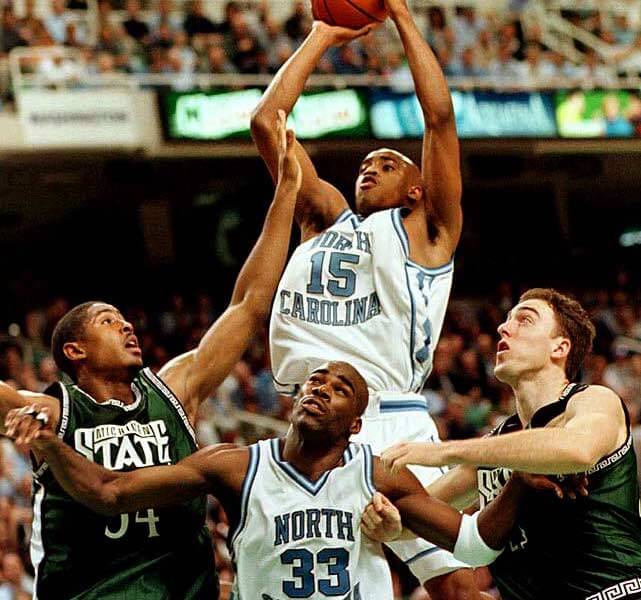 They say the best sign of leadership is that, if developed in a comprehensive way, it endures. For Diddy, Jamison and Carter, that was developed from learning under great people and taking their best practices and making it their own. You've just got to keep on movin'...just like Diddy repeats on the bridge.

Can't nobody take my pride
Uh-uh, uh-uh
Can't nobody hold me down... ohh no
I got to keep on movin'