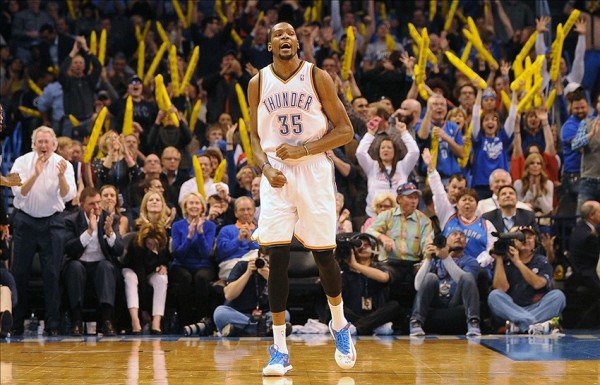 Wednesday, April 16th will mark the end of the 2013-14 regular season in the NBA.  With it, we will prepare to commit the next seven weeks of our lives to what we have come to know and love as the NBA Playoffs. If you have a significant other that doesn't give a damn about basketball like that, I would make a suggestion that you take a day or two and let them know that you appreciate them and that your absence in their lives has nothing to do with them. It's all about watching important basketball in late April and all of May. Okay, possibly June too.

Anyway, here's 10 random moments that I loved during the regular season.

ONE: Russell Westbrook going coast-to-coast in 5 dribbles and dunking on Kent Bazemore. YUUUUUUUUUUULE.

TWO: Giannis Antetokounmpo did two things that's remarkable. First, he was the only relevant thing that was going on for the Milwaukee Bucks this season. Secondly, he somehow outdid Westbrook and went coast-to-coast in three dribbles.

THREE: The San Antonio Spurs won 62 games (and counting) this season and it's generally considered not a big deal. There's an awesomeness about being that consistently great for as long as they have. Cool.

FIVE: The two best games of the year just happened to be against the same two teams as the Golden State Warriors and the Oklahoma City Thunder were clearly put on this earth to entertain us to no end. From people getting dunked on to unbelievable shooting displays, these games had it all. Also of note, these two games somehow had not one, not two but three game winners. Yes, this happened. Just believe me and watch the clips.

SIX: Carmelo's 62 points and LeBron's 61 points (both versus the 7-seed Charlotte Bobcats) were pretty awesome, but these 2 points from FLOTUS were the best points.

"He was a little fat ass. He had too much junk in the trunk. His decision making wasn't great, and he wasn't in great shape. He changed his entire body. He came back svelte and cut and understood you have to make better decisions, point-guard type decisions. He did all those things better and he earned it. He's been real important to us, obviously." --Popovich

Pop is the absolute best.

EIGHT: The greatest shooting guard in the history of the Los Angeles Lakers is clearly Nick Young. Swaggy P gave us everything we'd ever want in life. We want 40-point scoring outbursts. Tomfoolery on the basketball court. Wild outfits worn to the arena before the game. Photos emerging of said player possibly nibbling the backside of his significant other. Swaggy P is America, and we're here to cherish the man. All hail Nicholas Swaggington Percival Young.

TEN: The crowning of the MVP season of Kevin Wayne Durant. The fact that Kevin Durant has already been the league's scoring champ four times is incredible. What's more incredible is that KD plays on a team where many fans cry for KD to shoot more although we've seen time and time again in NBA history that one man can't do it all to claim championship glory. (Ask LeBron or MJ) KD's increased rebound and assist rate is only matched with his profound sense of where his place is in the league and where is ultimate goal is. He wants to be the best, there's nothing else that matters. Whatever it takes to win, he's proven that he's willing to do that. (Even play defense) So while the 2013-14 MVP trophy will sit nicely on KD's mantle, I imagine a nice piece of jewelry for one of his fingers would be even better.

Here's our top ten list, but we surely left a ton of great moments out. What were your favorite moments of the season? Let us know in the comments section. Youtube clips and GIFs are preferred.