I was not excited about watching the Super Bowl with a whole bunch of people.

I've always preferred to sit in the house like a hermit, get my Wingstop order ahead of schedule (10-piece garlic parmesan regular wings, side of ranch, small order of fries, side of cheese sauce) and have a few libations on deck. For the next three-and-a-half hours, my life can be devoted to football as this game, the Super Bowl, can be honored as the final game of the NFL season.

Instead, I decided to take my talents to a Super Bowl house party. What's worse, this was a Super Bowl house party that was filled with women. No, don't take it like that, I don't mind women. I like women. However, when I'm watching the Super Bowl, I'm not trying to be around women (and men, who were strangely in abundance) who aren't really here for the Super Bowl. I'm over here clapping it up, hooting and hollering, talking crazy and generally just being me, and you act like you don't like it? Well, this is why I like to stay my ass home and sit on my glorious couch instead.

By halftime, I went outside for a walk. The blowout was in full force, and when I returned for the start of the second half, two women stole my seat in front of the couch. Moreover, one of them was wearing a Cowboys T-shirt. I wasn't having it. I took my laptop, three-four Lime-A-Ritas and went to an empty bedroom (the bedroom with all the jackets and purses in it) and watched the second half of the game by myself.

And through all of that, I still had a great time at Super Bowl XLVIII.

You'll hear a ton of prognostication and analysis following up Sunday night's festivities, but we're not here for all of that. This is 10 observations that stuck in my brain following that ass-whupping the Seahawks gave the Broncos.

ONE: I want to get Marshawn Lynch's flamed-up BEAST MODE sweatsuit.

TWO: Demaryius Thomas is going to be a grandfather one day and will tell his grandkids that he set a Super Bowl record for most catches in a game, and then his grandkids will ask him if they won the game and then Demaryius will shed a single tear.

THREE: I'm 137% sure he wouldn't have made a difference in the game, but I wish Von Miller was ready to play.

FOUR: I'm pretty sure Earl Thomas is the best free safety in the NFL.

FIVE: I'm pretty sure Kam Chancellor is the best strong safety in the NFL.

SIX: I'm for damned sure Richard Sherman is the best cornerback in the NFL. 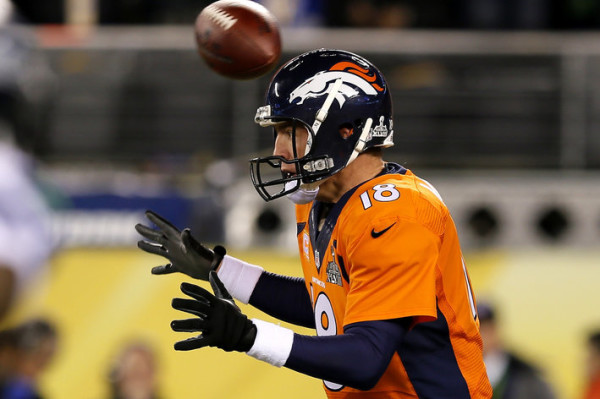 EIGHT: Two of the four highest paid Seattle Seahawks are wideout Sidney Rice and tight end Zach Miller. Seattle has to pay folks a lot of money, but I can pretty much guarantee those two guys aren't coming back. That's $15+ million off the books right there. Seattle might be alright for the future.

NINE: The people have tried to crown Peyton Manning as GOAT for well over a decade now. That time has now come and gone. It's dead. It's not happening. He'll never be the GOAT. He'll always be one of the greatest of all time, but unless he goes on the John Elway two-year world champion vindication tour at age 38, 39 … 40? I dunno.

TEN: That Seahawks defense should go down in history as one of the five greatest of all time ('85 Bears, '00 Ravens, mid-70s Steelers, '91 Eagles, '13 Seahawks). You could make the case that this is the best secondary of all time. Percy Harvin earned all his money in one game. I wish Richard Sherman could've been healthy enough to celebrate out there with his teammates. Pete Carroll is a joyous, jubilant madman. All hail Malcolm Smith the MVP.

The Seattle Seahawks are your Super Bowl XLVIII champions.