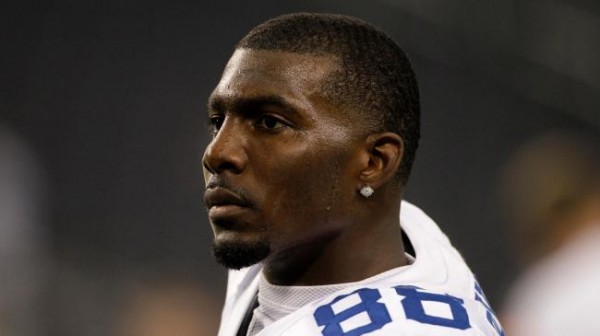 July 18, 2008. That was the date that started it all, and while one can see the title of this post and wonder what that has to do with anything, allow me to explain.

On that date, The Dark Knight was released in theaters nationwide, and I was anticipating this movie for two reasons. One, Batman is my favorite superhero of all-time, and two, The Joker is my favorite villain of all-time. I love The Joker, but I had severe reservations about the role coming back to life, and that’s because the last time I saw someone play The Joker, it was Jack Nicholson in the 1989 version of Batman. For 19 years, I didn’t think there was a person alive who could touch his role, and it’s safe to say plenty others felt similar.

But then, this happened ...

It took one scene and one line from Heath Ledger’s version of The Joker, and I was spooked. Spooked because one, the dude was chilling, two, because he made me believe he was The Joker, and three, because I knew that my vow that no one could touch Jack’s version of The Joker was in serious jeopardy. Well, after leaving the movie theater, I was thoroughly impressed, but not quite ready to change my mind.

Then I went to the theater and watched it again ... the very next day.

After that, I went again ... the very same week. I watched The Dark Knight three times in a seven-day span, at three different movie theaters and paid ridiculous ticket prices every damn time in doing so. After that, I was done masquerading. Jack Nicholson has done great things and he is one of my favorite actors of all-time, but his role as The Joker was now second-best. Heath Ledger did that, and it is something I have no qualms admitting.

Which leads me to Dez Bryant.

You see, I have been a Dez Bryant fan and apologist for years. I followed him at Lufkin High School here in Texas, the home of the best high school football in the country, and watched him closely when he went to Oklahoma State. When the whispers and concerns started coming about him with the 2010 Draft approaching, all I wanted was for the Dallas Cowboys to, somehow, find a way to pluck that particular Okie State Cowboy and put a star on his helmet. Once it happened, I was on cloud nine.

Shortly thereafter, a press conference was held with Bryant holding up a #88 jersey, and the concern immediately began to consume me. See, there are a myriad of reasons concern arose over my initial joy. The number 88 is sacred to Cowboys fans everywhere. For the old-timers, they associate it with Drew Pearson, and for the newer fans, like myself, B. Jones, Matt Lloyd and others of my ilk, we associate with The Playmaker, Michael Irvin.

It’s no secret that Michael Irvin is someone I stan for and held the spot as my favorite Dallas Cowboy of all-time. He held that spot since I was in elementary school. When I was in elementary, I wanted to get three parts in my head when I would get a haircut because The Playmaker had them, but my mama wasn’t going for that so I had to settle for one. When the kids in my school would play football in the street or in the grass or just play catch during recess, I had to be The Playmaker. There was no other option. Shoot, as far as I was concerned, there was one true football constant: There would never be another Dallas Cowboy that could ever be my favorite ever. That spot belonged solely to The Playmaker.

Well, that has changed. See, it has been a gradual process, one I have been hesitant to admit — kind of like the whole thing with the roles of The Joker — and it’s really because I didn’t think it was possible for this day to come. Sure, there was seeing Dez be the first one out on the field during training camp his rookie year and the last to leave, and yeah, there was seeing him stand his ground and refuse to carry the pads of a vet because he wasn’t there to fool around. He was there to play football, and while I loved seeing him stand his ground and I sang his praises, I stayed in the moment, making sure not to jump to crazy conclusions.

There was Ed’s bold proclamation that Dez was the unquestioned leader of the Dallas Cowboys, despite the fact that it was barely halfway into Dez’s rookie season, coupled with my appreciation for Dez being so high that I was willing (and will likely) spend over $100 on a game jersey with Bryant on the back. While all of that was true, there was still something keeping me from saying he could possibly be my favorite Cowboy ever, and it all stemmed from the irrefutable standing that The Playmaker was the initial reminder of why I became a fan of the Cowboys in the first place. 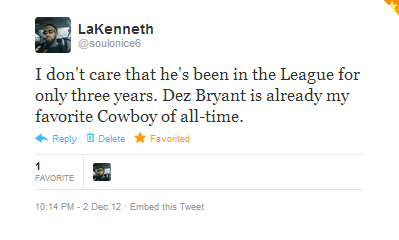 Well, as of December 2, 2012, it happened. See, Dez Bryant is not the best receiver in the NFL, and there are times when I wonder if he is even the best on this team. But there are things I have never had to worry about with him, and it’s a big reason why I can officially pronounce him as my favorite Dallas Cowboy of all-time. The young man plays hard all the time, and when he does make a mistake, it’s usually because he is trying too hard, not because he is timid or afraid or any of that.

The man embraces the stage in ways that are scarily similar to the Hall of Famer 88. He wants and needs Tony Romo to believe in him and says it frequently. He wants to make his coaches proud. He has improved immensely and has shown the ability to learn from miscues quickly. Sure, he’s in his third year, and there are still warts in his game, but his effort is never in question.

Plus, he deals with as much crap from the media down here as anyone who has a star on his helmet. They act like he should be conducting himself like a seven-year vet and not the third-year player that he actually is. The young man just made 24, and he’s going to do things that 24-year-olds (hell, things that people my age) do. I won’t charge up Cow fans and their treatment of him because, for the most part, the fans I know simply want him to be great, even if they voice their reasoning in ways that I don’t agree with.

He loves to play the game, and when it’s all said and done, that’s really all that matters. Someone who embraces the challenge of being great, someone who just wants to play football, AND he’s a Cowboy, AND he’s a monster at that? That’s someone I will take on my team any day, and the fact that he plays the receiver position and has embraced the responsibility that comes with the number 88 since day one makes it even better.

It may only be near the end of his third season in the NFL, but Dez Bryant is officially my favorite Dallas Cowboy of all-time, and while there has already been criticism lobbed at my head from my buddies who love the Cows, that’s perfectly fine. By no means am I saying he will be in the Hall of Fame, but what I am saying is I'm willing to ride with him as my favorite Cowboy ever to whatever road his football journey travels from here on out.

One thing I know about sports fans, especially when it comes to one's favorite teams, it's that fans are very hesitant to let go of the past, especially if their favorite player is someone from their youth. I am not saying that you have to follow my script, but what I am saying is that we, and sports fans everywhere when it comes to their favorite teams, should take a minute to appreciate what’s in the present, and if it means that a player can come along and make such a strong impression that he or she becomes your favorite player for your favorite team ever, so be it.