In the past few weeks the gods have been good to basketball and hip hop fans. The 2017 NBA Playoffs are in full swing, and Kendrick Lamar has given us an album that has sat atop the charts since its release. Being as basketball and hip hop are kindred spirits (or “Kendrick spirits” – get it? Okay, I’m done), let’s take a run through DAMN’s tracklist to explore what has taken place in this year’s NBA playoffs thus far. Press play.

Track 1: BLOOD.
“Is it wickedness? Is it weakness? You decide. Are we gonna live or die.”

The introductory track to DAMN begins with this line, which can be representative of the sheer dominance the Cleveland Cavaliers and the Golden State Warriors have posed on their opponents thus far in the NBA Playoffs. Both teams are undefeated in the 2017 postseason, and BetPhoenix has the best NBA Championship betting lines on their title chances. The Warriors handily swept Damian Lillard and the Portland Trailblazers, despite Lillard’s prediction of Blazers in six. Golden State is off to another impressive start against the Utah Jazz. The Cavs swept the Indiana Pacers, never looking back after erasing a 25-point halftime deficit in Game 3. They’re now off to a lightning start against the outmatched Toronto Raptors. Is it wickedness? Is it weakness? Who knows, but ultimately both the Cavs and the Warriors decide if their opponents live or die in this year’s postseason.

Isaiah Thomas has redefined the stages of grief in the NBA postseason. Since the tragic death of his younger sister Chyna Thomas on April 15, IT4 has left NBA fans in awe with how impressive his play has been despite navigating such a difficult and untimely loss. On May 2, his late sister’s birthday, Thomas led his Boston Celtics to an incredible overtime win over the Washington Wizards, scoring 53 points, and completely dominating in the fourth quarter and overtime.

Missing tooth in your DNA or nah? (Photo by Maddie Meyer/Getty Images)

Minimal compared to the loss of his sister, Thomas lost a tooth in Game 1 of this series, and took a significant fall in route to his 53 points in Game 2. Power, poison, pain and joy seem to all live inside his DNA right now. The little guy is built to last.

Track 3: YAH.
“My girl told me don’t let these hoes get in my head, my world been ecstatic, I checked the signal that read –”

Despite the New York Knicks missing the postseason yet another year, Carmelo Anthony has still made headlines during the 2017 NBA Playoffs. Unfortunately, the headlines have not been ideal for Melo. Gossip sites and social media caught wind of his alleged infidelity, and a possible divorce between him and his wife of seven years, La La Anthony. Even more disturbing were some of the insights from former teammates regarding how Melo viewed his responsibility to faithfulness in his marriage. La La has always seemed like quite the catch. Don’t let them get in your head, Melo.

The 22-year-old “Greek Freak,” Giannis Antetokounmpo of Athens, Greece, has exploded in his 3rd season in the NBA. Although the Bucks postseason was brought to an early end in the first round vs. the Toronto Raptors, Giannis added a few more action verbs to a resume that already has him regarded as one of the most exciting and top up-and-coming players in the NBA. The Greek Freak will be fun to watch for a long time.

“My motivation is this ghost I’m chasing.” This is what LeBron James said in April of 2016. One year later, the best player in the world seems closer to that ghost than any could have imagined in such a short amount of time. The historic comeback from being down 3-1 in the 2016 NBA Finals certainly added to his case. If solely focusing on this postseason though, LeBron’s play has been nothing short of remarkable.

The 32-year-old, self-proclaimed King is averaging 34.2 points, 9.2 rebounds, 7.3 assists, 2.7 steals, and 1.8 blocks. He also surpassed the great Kareem Abdul-Jabbar in career playoff points, scoring his 32nd point in Game 2 of the second round vs. the Raptors. LeBron only sits behind one player on that list now (or one “ghost”) and could very well surpass him before this postseason ends. The questions of whether LeBron is the greatest basketball player ever are at full steam. The discussion is definitely one worthwhile now, more than ever.

The Los Angeles Clippers seemed to be well on their way to a bright future when they established the “Big 3” of Chris Paul, Blake Griffin and DeAndre Jordan. Years later, not only have Doc Rivers and his team not won an NBA Championship, they haven’t even made it to a Western Conference Final. (By the way, did you know BetPhoenix has the best NBA Championship betting lines? Check them out.) Players and coaches want to keep the team together. At what point does loyalty stunt growth? To be continued.

Steph Curry with a basketball in his hands is simply amazing. Rudy Gobert is more aware of that than probably anyone right now, after being placed in a spin cycle in the Utah Jazz’s Game 1 matchup vs. the Warriors in Round 2 of the playoffs. Pride will be the death of you, young man. And by “you,” I mean Rudy Gobert. And any other “you” can apply to anyone else on the planet. Abort mission.

This season, Russell Westbrook became the first player since Oscar Robertson to average a triple double for a full NBA season. He continued his remarkable play in the playoffs as well, averaging a triple double with 37.4 points, 10.8 assists, and 11.6 rebounds per game. This proved to not be enough, as his former teammate and fellow MVP candidate, James Harden and the Houston Rockets blew by the Thunder in just 5 games. Russell is an incredible player, but “the humbling” was inevitable. The Thunder will need to add more talent in the offseason if they intend on playoff success going forward.

Track 9: LUST.
“I need some water, something came over me, way too hot to simmer down, might as well overheat.”

Joe Johnson is still pretty good at the game of basketball. The 35 year old lit the Los Angeles Clippers up in Game 4 of Round 1, going for 28 points, 5 rebounds, and 5 assists. He was especially good down the stretch, seeming as if he simply could not miss. The Jazz will certainly need him to overheat if they are to stand a chance against the smoking hot Warriors.

David Fizdale, head coach of the Memphis Grizzlies became far more popular after his wife posted this photo on Twitter, thanking Memphis Grizzlies fans for their support of the team. The Grizzlies were not able to escape the first Round, but doesn’t Coach Fizdale just look like the happiest man alive? Let this be a reminder that, while success in the NBA should be an expectation for those employed, life is bigger than basketball. One time for love!

Isaiah Thomas (5’9) and Markieff Morris (6’10) have quite the feud brewing. After the two exchanged some choice words in Game 2 of the second round, IT4 made it his mission to offer up a healthy death stare to Morris after every basket for the rest of the game. There were quite a few baskets scored in the rest of that game. Thomas finished with 53 points. David > Goliath.

Track 12: FEAR.
“How many accolades do I need to block denial?”

Kawhi Leonard is the silent assassin of the NBA. Over the past few seasons, he’s not only emerged as the star of San Antonio Spurs, he’s also emerged as one of the top players in the NBA. Despite the numbers and success, some would still deny his ranking among the top players. Is this due to the Spurs style of play, deterring some fans from watching a full game? Is this due to his temperament, never demanding attention although well deserving of it? Whatever the case may be, Kawhi deserves to be in the discussion.

LeBron James is still the most famous player in the NBA, make no mistake about it. He has been the object of catchy similes and metaphors in hip hop since before he stepped on an NBA court, and since that time has been pals with many of today’s top hip hop artists. It should have come as no surprise that LeBron was provided an advance copy of Kendrick’s DAMN album far before any of us peasants were able to get our hands on the album. In the weeks following, he took to social media to vibe out to K. Dot’s latest masterpiece, and even gave the album a review of sorts during an interview. The King gets what the King wants.

Last summer was quite the doozy for Kevin Durant. After him and the Oklahoma City Thunder were knocked out of the NBA Playoffs by the Golden State Warriors, the free agent decided to sign with the Warriors later that summer, which became one of the most criticized decisions in NBA offseason history. KD and the Warriors gelled together quickly, until a left knee injury on February 28th sidelined him for nearly the duration of the regular season. Durant has taken it easy in his postseason return, only playing 30 or more minutes in 2 games and recording two DNP’s. The theory is that the Warriors will rest Durant for as long as they can, so that he’s healthy enough to play big minutes should they advance to the Finals. At this rate, Durant will be afforded plenty of rest. When on the court, KD looks like his old self, scoring 32 points in Game 1 in the 1st Round vs. the Portland Trailblazers. Let it be known that the sleeping giant still lurks, and it’s no longer him vs. the world, yet him vs. himself.

Oh, and if you haven’t copped K. Dot’s new album. Go get “Damn” over at Amazon, asap. 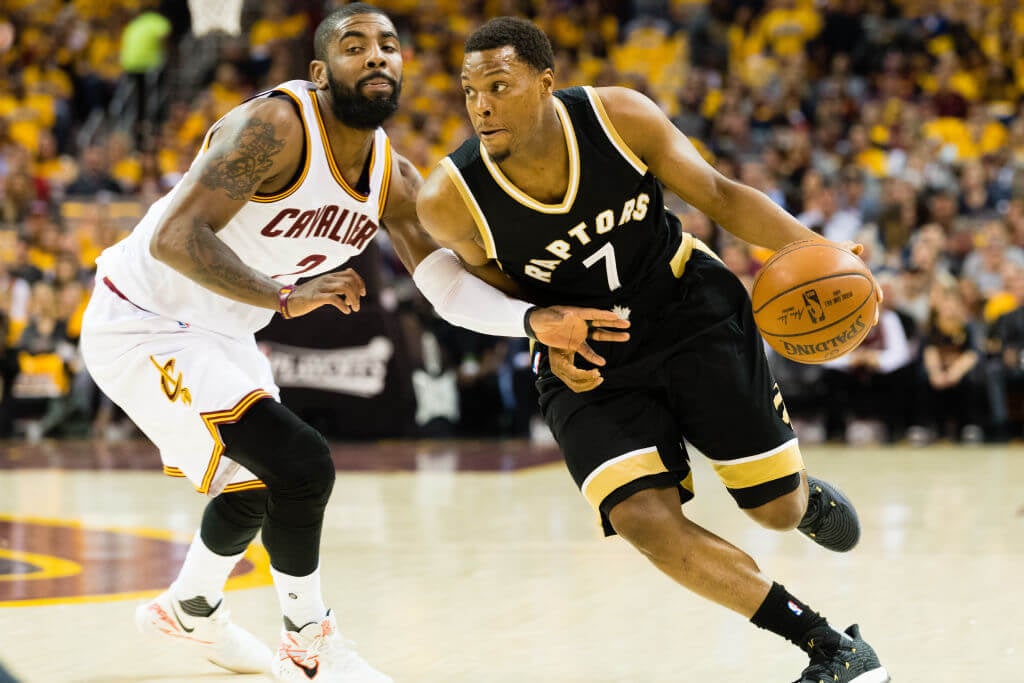 Basketball Kyle Lowry Is Headed Toward The Richest Deal In NB… 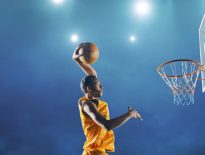 Basketball A 10-Year History Of No. 1 Ranked High School Bask…
0