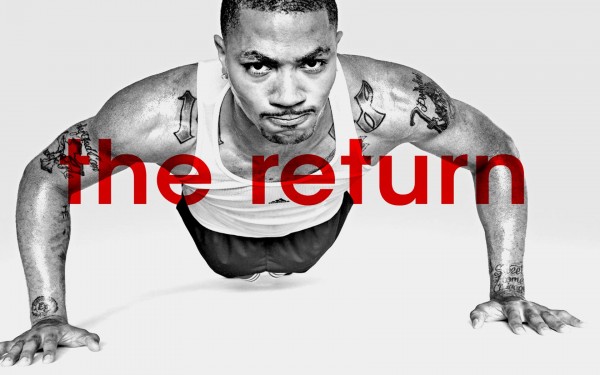 My Sunday morning started off with the usual pre-game football to the max and my Joel Osteen Motivational Tape (shoot, I didn’t get up to go to early service, so I had to do the next best thing). Then I visited the SLAM website and saw a link for The Return, which featured a spot called “Drive” about Derrick Rose and his comeback from an ACL injury he sustained in the opening round of the playoffs last season. Granted, I’ve been exposed to the spots before, but I never really sat down and watched them for real, so I decided to dedicate a part of my Football Sunday to doing just that.

These spots by adidas are absolutely amazing. They’ve done a tremendous job of chronicling D. Rose’s progress and rehab, providing plenty of snapshots along the way. While this is a journey that’s being chronicled through adidas, as well as through the movements, words and actions of Rose, it’s a journey that anyone who has suffered a setback can relate to. High school kids, college kids, other professional athletes and other people who go through physical and mental trials and tribulations can find inspiration through this series.

I see it every day in my work with college student-athletes; the work they put in exudes the five spots adidas has showcased so far. When one of them gets hurt and is out of action for a while, the five themes surface yet again. Some may not imagine coming to play college sports and getting hurt, because they’ve never been hurt before. To think that one minute everything is well, playing-wise, to the next when one of my kids comes through limping from pulling a hamstring or on crutches and has to sit for the rest of the year because of a torn ACL is humbling. Despite the setbacks, they continue their own variations of the five themes, which only serve to motivate and fuel their teammates, training staff and myself.

The commercials move at a steady yet intense pace, with Rose serving as a narrator through a variety of spots. The episodes are broken down into two-plus-minute spots, which allow things to sink in and make you anticipate the next episode. Stumbling upon the initial spot and going through to watch all of them, in order, was much more than I anticipated on my Football Sunday. The desire and motivation to do better came via an unlikely source and one that I’m glad was available.

Kudos to Derrick Rose and adidas for their work, and there’s no doubt that The Return is going to be live and better than ever.

One Reply to “Derrick Rose: The Return Is For Real”