The NFL season is just about here. And with it, comes the hype surrounding which young players can step up to help their teams and potentially become stars. Part of that depends on natural ability. But sometimes, it comes down to simply getting the chance to show their stuff. Here is a look at five rookie receivers who appear to have both the talent and opportunity to succeed this season.

Like last year’s post, which saw D.J. Moore, Christian Kirk, Dante Pettis, Anthony Miller, and Michael Gallup put up varying degrees of production, we’re looking at prospects that share trends with the top stars in the game and what kind of situations they’re in based on their teams’ available targets and air yards from last year. I started doing this kind of profiling last year based on findings from J.J. Zacharison and Adam Levitan. That established the type of criteria we’re looking for in wideouts.

Ideally, they should be an integral part of their team’s offense and have at least 24% of their team’s catches, 25% of the receiving yards, and 26% of the receiving touchdowns as a result, with 31.5%, 36%, and 42.5% being the averages of the truly stud receivers. Physically, they should be at least 183 lbs (with 190+ being preferred), run the 40 yard dash in under 4.6 seconds, record a vertical leap of at least 35”, and broad jump at least 10’. Falling short of these numbers is no death sentence by any means, but this is generally where top players at the position land.

The #32 pick’s star has lost some of its luster with the timing of Josh Gordon’s reinstatement coinciding with a hamstring injury suffered in the preseason, but Harry was the clear-cut #1 receiver prospect this year in my eyes. His 4.53 40 time may not dazzle at first glance, but it fits under our threshold and is even more impressive when considering his size — 6’2” and 228 lbs. The 10’2” broad jump distance is also satisfactory, but it’s his 38.5” vertical that truly stands out, especially since he’s shown that the jump ball is a big part of his game.

That ability to win in contested catch situations similar to Dez Bryant helped him dominate the Arizona State passing offense to the tune of producing 32.02% of their catches, 37.57% of their yards, and a whopping 47.37% of their touchdowns in the 12 games that he played before sitting out the bowl game. Even as a true sophomore the year before, he had market shares of 31.18%, 34.5%, and 40%. Those stats show that it shouldn’t take him too long to earn a chunk of looks in a Patriots offense that has the 6th most air yards available from last year and the 10th most targets.

There is plenty of opportunity to be had behind Gordon and Julian Edelman, with room for more since neither can always be relied on to stay on the field, and one could certainly do worse than having Tom Brady throwing Harry passes.

This may be surprising since the Ravens actually made Marquise Brown the first wide receiver taken in the draft with the 25th pick. Yet there are question marks around Brown in his first year since he is coming back from surgery for a lisfranc injury and only weighed in at 166 lbs, which is even lighter than his top comparison, DeSean Jackson. Instead, I’m focusing on Boykin after Baltimore traded up in the third round for him after a dominant combine.

At 6’3¾” and 220 lbs, he ran 4.42, had a 43.5” vertical, and broad jumped 11’8” to produce a SPARQ score above the 99th percentile on 3SigmaAthlete.com. An inconsistent, run-first offense at Notre Dame (especially early in the season with Brandon Wimbush at quarterback before Ian Book took the reins) contributed to him only catching 22.01% of the team’s passes as a redshirt junior. However, he posted a more acceptable 26.05% of their yards and 34.78% of their scores as the primary downfield threat. On a Ravens team that ranks second in both targets and air yards available, Boykin has already dominated camp, even being picked as a breakout star and earning praise from opposing beat writers.

Speaking of electrifying combines, Metcalf stole the headlines after blazing a 4.33 40, leaping 40.5”, and jumping 11’2” at 6’3⅜” and 228 lbs. The fact that the Seahawks traded back into the second round to get him is even more enticing since it shows how much they like him. Metcalf landed on a team with 35.5% of their targets from last year available, the 8th highest mark in the league.

There are concerns after needing a recent knee scope since he was plagued by injuries at Ole Miss, but he is expected to be back in action as early as Week 1. Those injuries also contributed to his up and down production (only 16.56%, 23.02%, an 29.41% market shares in the games he played last year), but that can also be attributed to the fact that he shared the field with another elite prospect in A.J. Brown, who would be on this list if he were drafted into a better situation.

That can explain why only Metcalf’s touchdown rate meets our criteria while the yardage is just short, and the fact that the 5-7 Rebels were 5-2 when he did play gives an idea of how important he was to their team.

On the other end of the spectrum is Isabella, who landed on a team without a ton of available targets, but had an absolutely dominant share of the UMass offense despite standing under 5’9” and 188 lbs. He commanded 38.78% of their receptions, 47.47% of their yards, and 48.15% of their touchdowns as a senior and posted similar numbers as a sophomore and junior before that, so it’s safe to say he’s #GoodAtFootball. And before you pigeonhole him as just another white slot receiver, know that he blazed a 4.31 at the combine with an impressive 36.5” vertical and a solid 10’1” broad jump to make him much more comparable to T.Y. Hillton or Brandin Cooks than to Wes Welker.

The reason I’m not too worried about the Cardinals only ranking 29th in available targets and 28th in air yards is that the offense is going to look completely different than last year’s unit that ran the second fewest plays in the league. With new head coach Kliff Kingsbury bringing a fast-paced Air Raid offense, there will be a lot of new opportunities to be had for the receiving corps, including the player drafted 62nd overall with the pick they traded Josh Rosen for.

I’ll be honest: this is more of a deeper pull as Johnson wasn’t on my radar until the Steelers took him 66th overall with one of the picks acquired in the Antonio Brown trade. When a team with their wide receiver track record takes one early, you pay attention, especially since they have the third most air yards available this year.

Digging into Johnson’s profile, he showed a knack for big plays at 5’10½”, 183 pounds, with 4.53 speed and solid jumps of 33.5” and 10’3”. As a redshirt junior, he produced respectable market shares of 22.27%, 25.68%, and 25%, and he was even better as a redshirt sophomore with 27.72% of Toledo’s catches, 32.61% of their yards, and a strong 46.43% of their touchdowns. He’ll face competition for looks behind JuJu Smith-Schuster thanks to free agent signing Donte Moncrief and last year’s second rounder James Washington, but there is potential for Johnson to step up.

Both Browns mentioned had cases to be made as the best receiver in the draft with strong production profiles. I explained why I’m hesitant about Marquise’s contributions this year. As for A.J., he wound up on a run-first Titans team that isn’t missing many targets or air yards and has already invested the #5 pick in Corey Davis and a four year, $46 million contract in Adam Humphries.

Likewise, Deebo Samuel has a pretty complete profile with all of the physical tools to replace Pierre Garcon and solid market share numbers in all three of his college seasons, but the 49ers rank just 27th in both available targets and air yards.

Lastly, the Chiefs trading up to select Mecole Hardman 56th overall was an eye-opener since he’s a dynamic athlete who was more of a gadget player at Georgia without a ton of production. He measured out at 5’10¼”, 187 lbs, with a 4.33 40 and 36.5 vertical, though with just a 9’11 broad jump. Even with Tyreek Hill somehow escaping a suspension, Kansas City has the 12th most targets available from last year, so there could be opportunity sooner rather than later if Hardman can refine his raw talent. 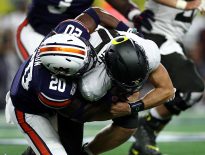 Emily Van Buskirk Oregon’s Loss To Auburn Not Part Of The Pac-12 P…
Films and Docs The Rock: “The U’s” Biggest Star…
0