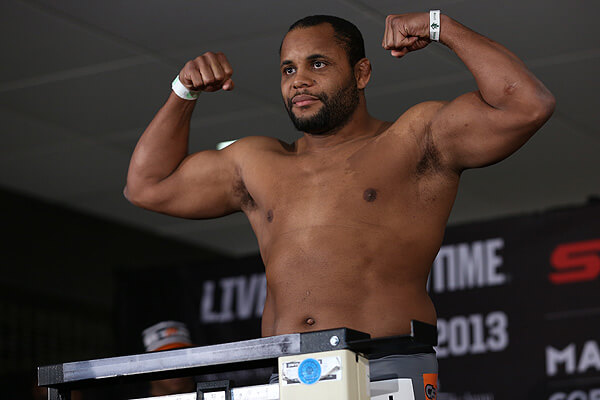 In a little over a month, UFC heavyweight standout, Daniel Cormier, will step into the cage for the first time as a light heavyweight. There to introduce him to the division will be Sugar Rashad Evans, who’s riding a two-fight win streak. In this clash of wrestlers, it should come as no surprise that weight is a central point of interest.

Everyone in the UFC cuts weight. No one fights at his or her “walk-around” weight. For a lot of fighters who’ve only been in MMA for a few years, the process of cutting weight for a fight can be especially grueling because the highly restrictive diet, the hunger pains, dry mouth, dehydration and forced restraint after the weight cut are all forms of torture that most don’t undergo willingly. For that reason, wrestlers, who are well-versed in this torture — it’s a defining characteristic of the sport — are usually thought to have an advantage over non-wrestlers when it comes to the fight on the scale. But Daniel Cormier’s story is a bit different.

Back in 2008, when Cormier was trying to make 205 pounds for his second Olympics in wrestling, he cut so much water weight so quickly (around 30 pounds) that after he beat the scale and tried to rehydrate he became violently sick. He started to cramp, vomit and lost the ability to walk. It turned out that he’d done serious damage to his kidneys and had to be hospitalized. In the process, he lost the opportunity to compete to improve on his fourth-place showing at the previous Olympic Games in Athens.

Now he’s trying to cut 40 pounds. Cormier’s flirtations with death haven’t been forgotten, however. This time around he’s set out meticulously charted weight goals several weeks in advance of the fight, he's hired weight-loss guru Mike Dolce to handle the strict diet required to safely shed the pounds, and he’s even teamed up with Automatic MMA, a weight loss supplement company.

It’s very clear why Cormier is undertaking such a huge mission — he’s a top-ranked heavyweight who can’t go after the champion, Cain Velasquez, because Velasquez is his teammate, pupil and friend. Cormier has often repeated that he would never raise a hand against Velasquez, and thus, to continue to work toward a belt, he’s got to come down a division to meet undefeated Jon Jones.

What’s less clear about Cormier’s weight cut is how it will ultimately affect him in the cage. Although Cormier wrestled (2002-2008) at about 210 pounds, he hasn’t competed anywhere near that weight in his MMA career. He’s fought as heavy as 247 pounds against Antonio “Big Foot” Silva, which means he likely walked around at somewhere near 260 pounds. Even still, when he fought in the cage he was usually the smaller man, with a height and reach disadvantage offset by his unusual quickness for the division.

At 205, he’ll likely lose the speed advantage, especially against an athletic fighter like Rashad Evans. The height and reach disadvantage will also still be there — Alexander Gustafsson is 6’5’’ with a 79-inch reach and Glover Teixeira is 6’2’’ with a 76-inch reach. Cormier is only 5’10’’ with a 72-inch reach.

So long as Cormier cuts the weight in a sensible way, however, what he’ll maintain on fight night is his high fight IQ and maybe even an increased gas tank now that he’s got less weight to move around.

Evans will offer Cormier a stiff test. Coming off victories against Dan Henderson and Chael Sonnen, Evans hopes that a victory against Cormier will put him somewhere near the top of the division, possibly even next in line for a title shot depending on whether Jones can keep his belt at UFC 172.

Evans is an athletic fighter with wrestling credentials that usually dwarf his opponent’s. But unlike with Chael Sonnen, who couldn’t stop Evans' double-leg tackle to save his life, there is very little chance that Evans will be able to take down Cormier. Why? Cormier is simply on another level of wrestling. Evans was an All-American with the added distinction of being only one of four men to ever defeat the great three-time national champion Greg Jones. But that’s as far as he went in the wrestling world. Cormier took second place at the NCAA National Championship in 2001, losing to arguably the greatest college wrestler of all time, Cael Sanderson. Cormier went on to become a six-time USA Senior Freestyle National Championship and a two-time Olympian. There’s no comparison between the accolades and accomplishments of Evans and Cormier. Unless Cormier comes in totally dehydrated, there’s little chance he’ll be in much danger from Evans' takedowns.

Given the seriousness with which Cormier is approaching his upcoming battle against the scale, it seems more than likely that what he’ll lose in speed as he sets out to make a name for himself in the light heavyweight division he will be able to make up for with his technique and strategy. We’ll find out for sure on fight night.

One Reply to “Daniel Cormier Vs. Rashad Evans: A Sweet Introduction To The Light Heavyweights”