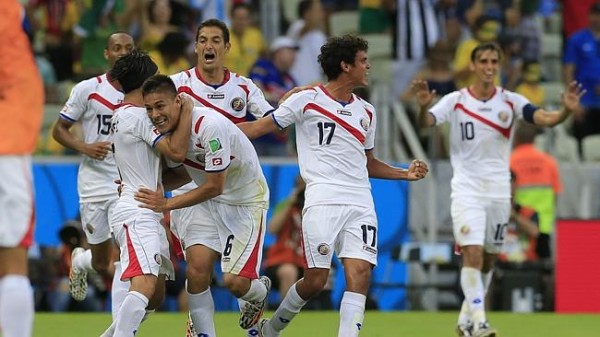 Soccer has a funny way of putting countries on the map. Prior to the 2014 FIFA World Cup in Brazil, most Americans thought of Costa Rica as either a tourist destination, and with good reason — check out vacation packages here — or a geographic enigma. Even the great Mike Tirico called the Central American country an “island nation.” For the record, it's not.

Now when you enter “Costa Rica” into Google, “world cup” comes right after “map” in the most popular results. Coincidence? Perhaps.

Los Ticos inspired their close to 5 million countrymen, as well as millions more across the world, by reaching the World Cup quarterfinals. They quickly became the tournament underdog among a collection of soccer super powers. Then again, Costa Rica's run was hardly a fluke.

Against Greece in the round of 16, Costa Rica became darlings. They played with 10 men for nearly an hour, conceded a late tying goal, but held on to advance to the final eight on the back of a penalty shootout. The Netherlands needed spot kicks to end the dream in the next round. Costa Rica returned to the red streets of San Jose as heroes.

The challenge now is to build off the sterling performance.

This as true for the individuals as it is for the team. Goalkeeper Keylor Navas has already cashed in with a move from Levante to European Champions Real Madrid. With Iker Casillas rumored to be on his way out and incumbent Diego Lopez likely to follow, Real's net could be Navas' for the taking. It's a well-deserved promotion for a man who, despite stiff competition from Memo Ochoa and Tim Howard, was CONCACAF's most consistent keeper at the World Cup.

Navas, unlike teammates Bryan Ruiz and Joel Campbell, has the luxury of playing a position that fits into any formation. If he stops shots, he plays. That isn't the case for Costa Rica's attacking stars, who are still looking to establish themselves in Europe's top leagues.

Ruiz in particular faces an uncertain future. He played well for Fulham in 2012-13 but struggled in the first half of last season. The Cottagers, who were eventually relegated after a 13-year stay in the Barclays Premier League, loaned him out to PSV Eindhoven of the Dutch Eredivisie to finish the year.

In Brazil, Ruiz hurt his professional prospects, ironically, by playing well. Fulham still owns his rights, but without Premiership revenues, the club doesn't want to pay the 28-year-old. Turkish team Besiktas and Greek champion Olympiacos are reportedly looking to sign Ruiz. The Costa Rican has made that more difficult through no fault of his own. His two World Cup goals, one a world-class header against Italy, the other a cleverly placed shot against Greece, and box-to-box display raised his transfer fee significantly. Furthermore,  Ruiz thrived in Brazil with a freedom that top clubs won't allow him come the fall.

Campbell finds himself in a similar predicament. The 22-year-old signed with Arsenal in 2011 but has yet to make his first team debut. Instead, he's been loaned out to three different teams in three different leagues. This might be the year he breaks in with the Gunners. Campbell scored 11 goals in all competitions last season for Olympiacos, including a stunner against Manchester United in the Champions League knockout stages. He followed up the strong club campaign with a goal in Costa Rica's opening win over Uruguay at the World Cup. His place in North London looks inevitable at this point.

But it's not that simple. Manager Arsene Wenger likes to employ forwards who can hold the ball up and play intricate passes in the buildup of Arsenal's attack. That's not Campbell's game. He relies on speed and a lethal left-footed strike to trouble opponents.

There's also the apparent CONCACAF bias to consider. Very few players from the region stick with Europe's top clubs. Only Trinidad and Tobago's Dwight Yorke, who starred for Manchester United in the 1990s, has been featured regularly for a continental juggernaut. Clint Dempsey got little more than a cup of coffee at Tottenham Hotspur. Chicharito Hernandez has been relegated to "super sub" duty at United. Campbell, although still young, faces stiff competition at Arsenal.

A Campbell breakthrough, though, could open the door for more of CONCACAF's young stars to follow. The same is true of Ruiz and Navas. If the trio of Ticos falters, however, all is not lost. They put Costa Rica on the map this summer. That's an accomplishment in itself.