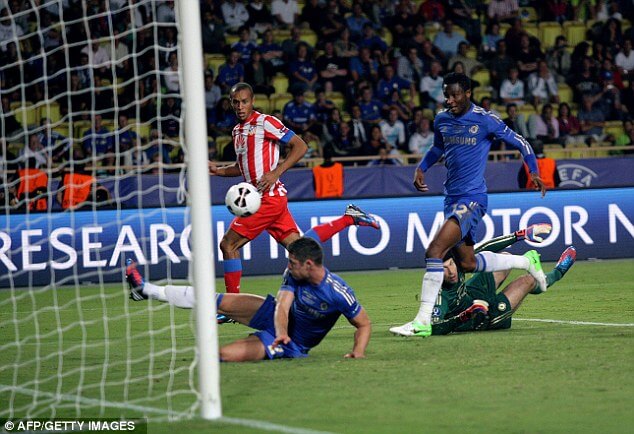 No matter who won Wednesday's Champions League semifinal, we would have had intriguing story lines. Had Chelsea bested Atletico Madrid, as the Blues were expected to at home, Jose Mourinho would have brought his new old club or old new club to face the team he jettisoned last summer in Real Madrid. Of course, Madrid's boss, the Italian Carlo Ancelotti, had previously managed Chelsea as well.

Then there's the return to Portugal factor. The Iberian country's best ever manager, Mourinho, would have squared off against its best ever player, Cristiano Ronaldo, in the nation's capital of Lisbon.

But Atletico Madrid spoiled the party. Atleti ousted Chelsea 3-1 at Stamford Bridge to set up a Madrid derby for European supremacy. Here are five thoughts on what we'll have in store.

Cristiano Ronaldo and Gareth Bale can absolutely play together

The biggest concern surrounding Bale's $123 million transfer from Tottenham Hotspur to Real Madrid was not the enormous price tag. It was whether or not his presence alienated incumbent star Cristiano Ronaldo. Bale and Ronaldo excel at the same part of the game. They dribble at defenders at full pace, throwing them aside with subtle cuts and measured touches. Both possess rocket shots. Both have displayed aerial prowess. Still, Madrid critics weren't sure you could fit both into the workings of a team. They've since been proved wrong. In Tuesday's semifinal win over defending champions Bayern Munich, Bale fed Ronaldo for the clinching third goal. He broke through Bayern's defense and outraced Dante before the defender's back pressure forced him to lay the ball off. An on-rushing Ronaldo sent it under an exasperated Manuel Neuer for his 15th goal of the competition. The play said everything. Good luck containing one of them, let alone both.

Atletico Madrid has seen a who's who of world strikers pass through its gates. Fernando Torres, Diego Forlan, Sergio Aguero and Radamel Falcao all plied their trade in Spain's capital before departing for greener pastures — and piles of money I suppose. Yet the club continues to produce world-class talent. Diego Costa is the latest and most successful of the group if only because he has led Atleti to new heights. He has scored 35 goals in 47 games in 2013-14, seven of which have come in the Champions League. His second-half penalty gave Atletico Madrid a lead it would not relinquish against Chelsea.

Diego Simeone is making a name for himself

Before he was manager of Atletico Madrid, Diego Simeone was an Argentinian legend. He was capped 106 times and appeared in three World Cups. It's not often that someone who starred on the field finds success on the sidelines. But Simeone has done just that. Since taking over in 2011, he's won 95 games at the helm of his former club. He's accomplished this while installing a South American attacking verve in his side. Simeone is young at 44. His club responds to that youthful authority. Atleti has become the Spanish Dortmund during Simeone's tenure, a team built to take down giants with attractive soccer. Atletico Madrid stands on the cusp of a remarkable double. They can win La Liga as well as the Champions League.

This Final will be entertaining

A year ago, Bayern Munich and Borussia Dortmund engaged in the most wildly entertaining final in memory. The 2-1 affair was filled with chances and attacking moves from both sides, a far cry from the cagey games that usually culminate the elite competitions. The familiarity of the two teams removed any pretense. There were no secrets. Neither team had anything to hide nor to lose. The same is true this year as La Liga's top two clubs will bring their domestic rivalry on the road.

As much as I and the rest of the neutral fan group would love to see Atletico Madrid pull off the upset, it just won't happen. Atleti did beat Real at the Bernabeu in September and held Los Blancos to a 2-2 draw at home. La Copa del Rey, though, was a different story. Ronaldo and company ran Atleti ragged in a 5-0 thrashing over two games. The stakes are high once again. Ronaldo is in his home country. Gareth Bale is in peak form. Real will become the first team to 10 European Championships.

One Reply to “Champions League Final: 5 Thoughts On Atletico Madrid Vs. Real Madrid”