"The Showcase of the Immortals" is taking its 35th trip around the sun. Like other years, Wrestlemania will be larger than life. Only now that context has taken on more than one meaning. This year’s event will not only dazzle but also plan to keep you engaged for more than six hours. (It’s important to note that 'Mania 34 was over five hours long in addition to the two-hour kickoff show.) As it stands now, the card sits at 15 scheduled bouts with rumors swirling around the magic number of 17. This event stands to break attendance, revenue and attention span records.

With respect to the history-making main event of Ronda Rousey vs. Becky Lynch vs. Charlotte Flair, and the Universal and WWE Championship bouts, here are five other non-main event matches that will keep you on the edge of your seat.

The men's battle royal returns to Wrestlemania for the sixth time and is usually hit or miss. While the winner of this match receives virtually nothing, this year’s buildup has its positives. Braun Strowman has been the focus in his feud with SNL guests Michael Che and Colin Jost. That alone should provide a surprise. Without question Braun deserves better and has been misused for the past year. But flying under the radar is the fact there are only 29 confirmed entrants. Strowman won enough battle royals in 2018. Could another monster make his debut?

Since the announcement of this match, the internet wrestling community has been outraged. There’s no way the WWE hasn’t stopped to take notice of the bad response. This is all positive for Corbin who is generating a ton of heat in promos. Where there is smoke, there must be fire and fans shouldn’t buy this type of ending for Angle. Somehow the Olympian will go out against the man who inducted him into the Hall of Fame, John Cena.

Cena has been trolling Corbin on IG for weeks. In the end, he’ll have an unforgettable match with the man who introduced him to WWE. In fact, if this does not happen the entire stadium should collectively leave. 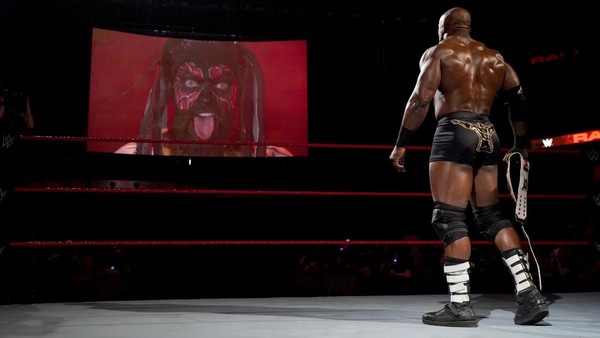 DEMON FINN!. The most exciting gimmick we rarely see will be showcased on the grandest stage. The Demon never disappoints, and this match could go short. But the entrance will be worth the wait since Finn should’ve pulled The Demon out vs Brock Lesnar at the recent Royal Rumble.

A traditional feud predicated on bragging rights is always refreshing. The accomplished veteran takes on the man carrying the blue brand for the past three years. The war of words between these two in such short time has been magnificent and the match itself steal the entire show. Orton has been a staple of 'Mania season for almost two decades, providing jaw dropping moments with each RKO out of nowhere. Both athletes' records for 'Mania indicate this is truly a toss up, and the unpredictability factor makes it even more enticing. Who will stake their claim as the poster boy for Smackdown Live?

A bit of a curveball because this isn’t an actual match… yet. We know that Elias will be performing for the crowd at Wrestlemania. We also know that Elias can never finish a performance without being interrupted. These two factors will lead to a Wrestlemania moment everyone can enjoy. Elias has called out both The Undertaker and The Rock in the past year. When one shows up to steal Elias’ thunder, 'Mania will feel complete. Fans haven't gotten a taste of a Rock concert since 2013. As for Taker, he's feeling fit, and in his words, is not done.

If you’re not a regular viewer of 205 Live, Buddy Murphy is a sight to see. Cruiserweights often over deliver. I know from experience as I was at Wrestlemania 33 in Orlando when Neville vs Austin Aries opened the show, which was was by far the best match of the night.