Elite fighters make the great ones look average. That's what Errol Spence Jr. a.k.a. "The Truth" accomplished after defeating Mikey Garcia by a unanimous decision. Spence landed 345 total punches, 51% of which were power shots. He fought a perfect fight through the eyes of many and while Garcia deserves kudos for hanging tough and going the distance, there are no participation awards in boxing. Moving up two weight classes proved to be too much for Garcia, which begs the question, who can compete with Errol Spence Jr.?

The welterweight division remains loaded with talent, so here are three challengers that would be worthy of free bets that should receive your consideration: 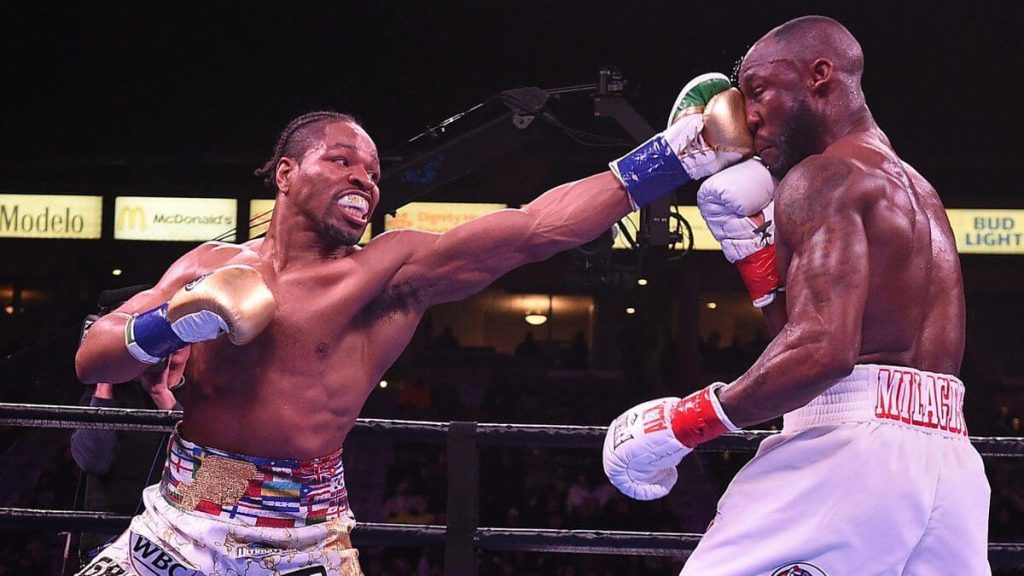 Porter was lucky to leave his last fight with a split decision against Yordenis Ugas. (Los Angeles Times)Let's try and forget about Porter's horrible St. Patrick's Day outfit on the broadcast and remember he is the reigning WBC welterweight champion. Since Porter's loss to Keith Thurman, he's enjoyed a four-fight win streak, and is also one of two fighters to defeat Danny Garcia (securing the vacant title in the process). While Spence is a precise and powerful puncher, Porter is notable for being busy and fearless to slug it out. This could take Spence off his game enough for Porter to score rounds. Spence also has the desire to be the pound for pound best welterweight in the world. Booking this fight would be a step toward unifying the titles. Porter did not look his best recently against Yordenis Ugas, barely making weight and inching by in the victory. A fight against another top dog would bring the best qualities out of Porter. (TSFJ Fight Odds: Spence -400)

Crawford and Spence are two frenemies who have been lobbying to step in the ring with each other for some time. It seems that the promotion teams of both parties are the only thing stalling this from happening, perhaps waiting for the perfect time to execute this bout from a lucrative standpoint. Stylistically, Crawford brings similar power, hand speed and defense. It's also notable that he can seamlessly switch between orthodox and southpaw. Both fighters have enjoyed similar success of knockout victories and the promotion for this bout would be priceless. Bud is tabbed to fight Amir Khan in April for the WBO welterweight title. However, boxing purists are eager to see this happen. (TSFJ Fight Odds: Crawford -150)

Many boxing pundits tabbed Pacquiao as finished in the ring. But after defeating Adrien Broner with style points, Pacquiao proved that age is just a number. At 40 years old, he still showed the ability to stay active and display power against a fighter a decade younger. The current holder of the WBA welterweight title is most likely next in line. Spence is on board and even shared the spotlight with Pac-Man after his victory last weekend, citing it would be an honor to fight the future Hall of Famer. An experienced fighter of Pacquiao's caliber could pose a real threat to Spence's unpolished record. This also would be the most lucrative opportunity for both competitors as Pacquiao is still a strong in-arena draw. This fight would be the antithesis of Mayweather vs Pacquiao and give all fans their money's worth. Spence believes this is the only fight that makes sense.

"He just beat Adrien Broner on pay-per-view. He actually holds the record for the most tickets sold at AT&T Stadium. I feel like it only makes sense to face Manny Pacquiao, back at the AT&T Stadium, and break his record and maybe have 70,000 seats filled. I'm putting on my promoter's hat now."

Keith Thurman - This was previously the fight to make until Thurman sat out a year with injury. Might be a good idea to give "One-Time" some tune-up bouts before these two titans clash.

Kell Brook - A rematch could show is Brook can make adjustments against Spence, who was his first opponent since a stoppage loss to Genady Golovkin where he injured an orbital bone. Spence re-aggravated that same eye in their bout, but the British pugilist has won his last two bouts.

Danny Garcia - Still one of the best in this division that could use a marquee fight to remove the stigma of being a "cherry picker." The losses to Thurman and Porter may have erased his mystique but styles make fights.

Floyd Mayweather Jr. - For better or worse, the retired fighter is still the biggest draw and payday in the sport. There's no doubt that Floyd can still go and a fight against Spence is one he would properly train for. This potential bout would look like Mayweather fighting a younger version of himself.

4 Replies to “Errol "The Truth" Spence Jr. Needs A Challenger”