Nearly a decade ago, Raquel Miller wasn’t known as “Pretty Beast”, she was an administrator in a San Francisco law firm. Miller was like many adults in their 20s, still trying to figure life out with multiple pots on the stove.

While life as a corporate square would be a safe simmer on one burner, on another was a pot boiling, just waiting to have the lid taken off. For Miller, that pot was becoming a professional boxer, and in the years following, she earned her nickname, became an Olympian and an interim world champion. It’s the type of inspirational sports story you’d read on sportstriumph.com.

Bryan Fonseca sat down with Miller to talk about her journey, her challenges in being a woman in professional boxing, and who’s belt she’d like to take next.

Bryan Fonseca: What was your upbringing like just coming up in San Francisco?

Raquel Miller: I grew up in the inner-city in Hunter’s Point, but what sticks with me now is being able to adjust to any situation because San Francisco and the Bay Area is so diverse. Growing up, confidence was always instilled in me, so boxing was something that came naturally because I was always a fighter, and my mom always taught us to be confident.

BF: So was boxing a part of your childhood then?

RM: No. I didn’t get into the sport until I was older, but I always had street fights and I’ve always been into sports, so it was a natural evolution. That’s how I ended up wanting to box because I used to fight so much and I wanted to see what would happen if I started getting in the ring and fighting that way.

BF: What were your expectations upon pursuing boxing and when did you think about being a pro?

RM: When I first started, I just wanted to have one fight. That was my initial goal. I just wanted to see what would happen. To have one fight and to lose weight. I had my first fight, I lost about 50 pounds. Then it just became something that I fell in love with. Then I wanted to go for the Olympics, and people said, ‘Oh no, you can’t go for the Olympics, you haven’t been boxing that long.’ I made a challenge to myself and said I want to go to the Olympics, and I did, as an alternate at the London Games. So, one fight led to two fights, led to ten fights, led to a national championship, Team USA, and then it just continued to evolve. It just became my life.

BF: How would you best describe your experiences in your few years of doing this?

RM: The first few years are when you’re super excited about something. It’s still new. I think further in my career is where the challenges start to happen and you realize that some people don’t support women’s boxing. You recognize politics. You’re really overlooked a lot, you’re underpaid, people are just giving you the runaround.

BF: At that time, how were you keeping your head above water?

RM: I worked full-time at a law firm and I was pretty much training in the morning, on my lunch break, and then I would go to the boxing gym when I got off work. Then I would finish my day going to 24-Hour Fitness either getting in another run or doing some strength and conditioning.

BF: How does your mom feel about you boxing? You’re holding a belt now!

RM: Yeah, she still doesn’t like it. She understands that it’s something I love and it’s a big part of who I am. But if she had a choice it’d be like, ‘Okay, are you done now? How much longer?’ (chuckles). When she’s watching she’s screaming and telling me to go to the body and all that stuff. She’s into it.

BF: Now you have an interim world title, how do you see this playing out?

RM: I definitely see myself ending my career as a world champion and unifying the belts. That’s definitely in my future because it’s already been written for me. But something that’s going to help me step out and be different from a lot of them is the work that I do outside of boxing. From my clothing line to my non-profit organization to just who I am as a person. I think that’s going to be something that makes me different, that I’m not just a boxer. I have other goals.

Raquel Miller stays busy outside the ring with her non-profit foundation and clothing line in San Francisco.

BF: You’ve talked about boxing being a business, how do you make the numbers work for you?

RM: There’s no reason why the man fighting for the same title that I’m fighting for is making $200,000, and I’m barely making $10,000. We’re both putting our life on the line, so why as a female fighter should I make it seem like I’m not worthy. There’s enough money to go around. So why are we not getting paid? Because we’re women? Because that’s what it boils down to.

BF: That financial gap between men and women in boxing, is that something that you think can change?

RM: I feel like by the end of my career, women will be making decent money in boxing. It’s hard to be an athlete full-time. A lot of women are working – like my best friend, she is a full-time police officer and she’s an athlete. She loves being a police officer, but it shouldn’t be that way. I should be able to get sustained from my fighting to sustain my life to where I don’t have to do all this other stuff and train at the top level.

RM: I would defend my interim title next. I would love to fight on ESPN or DAZN. I see myself going for a world title and then being able to unify it. I see my clothing line being able to crack at least $50,000 this year. I want to solidify myself as a world champion, get my brand to the next level, and push myself because I’ve got some girls that are on my hit list that I want to take care of.

I know, I know. I’ve aged poorly. I also know that neither you or I actually believe that. I cover NYC sports + more in a variety of ways. 4x NYPA nominee. 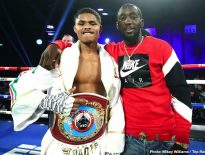 Boxing Fantasy Booking: The Boxing Matches We Need After …
0