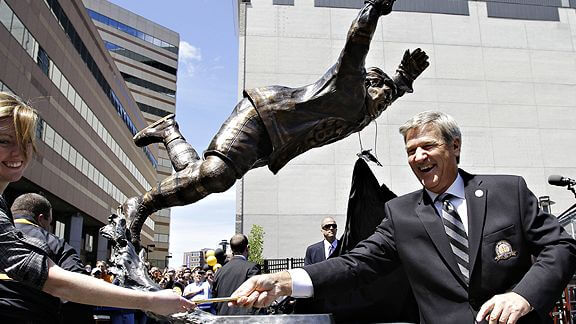 Early this summer, my colleague Jason Clinkscales posed the question, which athletes' autobiographies need to be written? After very little self-deliberation, I suggested Bobby Orr.

The reason Jason's question is so compelling is that very few autobiographies, if any, need to be written at all. When it comes to athletes, that number shrinks even more. How does one empathize with or learn from a story that centers on someone's stardom and fame? As a result, many autobiographies that find their way to the shelves scream “read more about me, by me.”

Orr, on the other hand, has a unique story to tell. His career arc follows that of a Greek hero. A child prodigy from an obscure hometown, Orr signed his rights over to the Boston Bruins at age 14. By 25, he was on top of the hockey world after a meteoric rise. Orr was the undisputed best player of his era and maybe the best of all time as well.

But every hero has his fall, and so it went for Orr. Chronic knee injuries robbed him of a prime. His unbreakable trust in his agent turned friend Alan Eagleson, Orr's hubristic quality if he had one, robbed him of his fortune.

Redemption came in retirement in the form of a steady family life and a new-found career as a player representative. Orr set out to prevent kids from falling into the same trap that cost him so dearly.

I knew that story before I wrote my words for Jason. I just wanted to read Orr tell it himself. Unbeknownst to me, he was putting the finishing touches on his autobiography as I was whimsically calling for it to be written. Orr: My Story was released in stores on October 15. I read it in a week. And I have to say it was rather ... unfulfilling.

Much of what swayed my opinion was strictly personal. For the record, Orr is my all-time favorite defenseman. It bridges on hero worship at times. It should be said that I'm far from alone in that aspect. So naturally my expectations, or rather my desires, were set unreasonably high. This is his story, and I should let him tell it.

And yet, Orr's personality causes problems from the start. In his introduction he writes, “If this book were just about nostalgia, or highlights from my career, it would just reinforce a version of the story I never found particularly interesting.”

Orr has never been one to speak at length about himself. Such a quality endeared him to millions of fans. It also prevented him from speaking with biographers who have come calling through the years. He remains a humble Canadian of modest birth who is thankful for all that was provided to him in life.


Orr devotes much of his book to extolling his parents for their role in his upbringing. He makes it a point to name influential coaches whether they be from his time as a squirt in Parry Sound or the dying days of his Bruins career. For example, Orr has an entire chapter making a convincing argument that Don Cherry should be in the Hockey Hall of Fame.

Teammates receive a heap of praise. So, too, does Orr's wife Peggy. In other words, Orr's story is all about the people in his life. And that's fine, and it's nice. But it leaves so much out.

Orr might not find his career achievements “particularly interesting,” but his audience does. Choosing to ignore his statistics alienates Orr from his readers. It also robs the autobiography of substance. Unwilling to talk about his role in the Bruins' success in the early 1970s, Orr breezes through his career. He discusses Stanley Cup runs as Wikipedia might: vaguely and void of emotion. In describing the Bruins' 1972 series against the New York Rangers, Orr writes, “We were up against a great team ... Still, we took the first two games in Boston, and though we lost game three in New York, we held on to win the fourth by a goal. We were heading back to Boston with a 3-1 lead in the series.” Statistics and some personal reflection don't have to be the story, but they certainly aid the story.

Orr does mix in some keen insight on teammates and opponents alike. He calls Montreal Canadiens legend Jean Beliveau “Mario Lemieux before Mario Lemieux was born.” And some previously undisclosed anecdotes jump off the page. In the aftermath of the infamous Pat Quinn hit, Orr recalls an encounter with a shady citizen in a hotel lobby. The hooded fellow asks Orr “in a very low voice, 'Do you want me to take care of Pat Quinn?'” Orr responds coolly, “No thanks ... I'll take care of him myself.”

Such instances are few and far between, though. They're lodged in pages and pages of summary. If I sound like I'm being too harsh, I don't mean to be. It's Orr's autobiography, and he can frame it as he pleases. However, I have a concern that readers who approach Orr for the first time might read through the book and then check the statistics and wonder, “How is this the same person?”

Orr likely prefers it that way. His image consciousness undermines the endeavor from the start, not just in discussions of his performance but also in what should be the hardest-hitting portions of the autobiography.

Orr finally gets to Alan Eagleson, his longtime agent, in chapter 9 (ironic its place, but likely unintentional) titled “About Alan Eagleson.” The title speaks directly to the writers, fans, analysts, etc., who have long wanted to hear Orr's account of the man who derailed his career on and off the ice. At first, he doesn't hold back on the bitterness: “To this point, I have not mentioned Alan Eagleson by name ... If I had the choice, I wouldn't write another word about the man for exactly the same reason I rarely talk about him. That is, Alan Eagleson is no longer a part of my life —  he is just a bad memory.”

In one memorable paragraph, arguably the most poignant of the book, Orr writes of Eagleson:

“Anyone can commit a crime and be convicted of it. There is nothing special about that. But to be stripped of honors like the Order of Canada and membership in the Hockey Hall of Fame is a punishment reserved for a particular kind of criminal. It means you have done great things in your life — and it means your misdeeds are bad enough to overshadow those great accomplishments.”

And yet the chapter on Eagleson lacks punch. Orr bemoans his negligence in letting his agent steer him to Chicago at the close of his career when as he says, “My heart was in Boston.” But he fails to see the total consequences of that negligence. Because Orr allowed Eagleson to operate unencumbered, the latter doomed the NHL Players Association, which Eagleson both founded and fronted, from its inception. Eagleson also prevented Orr from becoming a part owner of the Boston Bruins, a stipulation in Boston's last contract offer to the Norris Trophy-winning defenseman. The ramifications of that nefarious deal are still evident today. Would labor strife exist if the Players Association had a more stable existence going back to its nascent days? Would lockouts occur with an esteemed man like Orr sitting in the owners' meetings?

Perhaps the author's embarrassment over his role in Eagleson's rise prevents him from seeing the bigger picture, or maybe he hadn't considered it at all. But it's worth asking.

Orr's key mistake in approaching his book, what he fails to realize, is that for an autobiography to work it has to be no holds barred. I should have known I would be disappointed when I read, “I am not particularly comfortable talking or writing at length about other people in a negative way.” Villains are villains and should be treated as such, even if they might stumble across your words. That's part of the story.

And it's not just the lack of negative passages. It's the more positive ones as well. I want to know what went through Orr's mind as he circled his own net to start a rush. I want to know how he made so many great players look clumsy defending him one on one. I want to know what it feels like to reach the pinnacle of your sport, to become a modern Alexander left without lands to conquer at such a young age.

This isn't to say you should forgo reading Orr: My Story. Orr writes well enough, and although he tends to come off as preachy, it is a relatively easy and pleasant read.

It's just that it could have been so much more. Orr's autobiography is best read in conjunction with a well-researched biography such as Stephen Brunt's excellent Searching for Bobby Orr, where each serves as a lens for the subject.

As I closed the last page on Orr: My Story, I felt unfulfilled. I feel it even more writing this.

3 Replies to “Book Review — Orr: My Story By Bobby Orr”