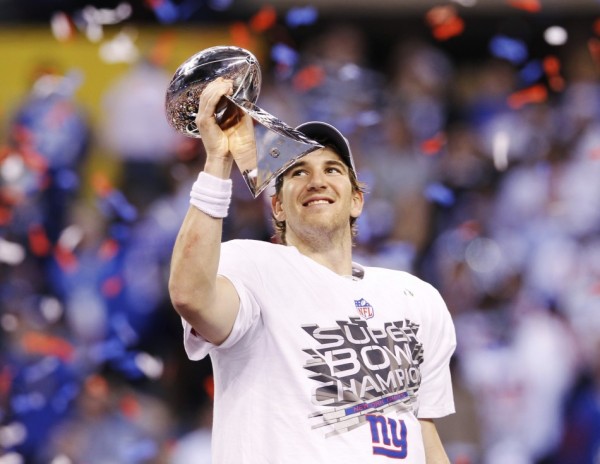 For as much as we enjoy the concept of parity in sports, there’s a tendency to talk more about dynasties than unexpected champions. Whether it’s hailing the greats of the past, despising those of the present or laughing at out-of-context quotes of potential ones, dynasties write the histories of our games, for better or worse.

The thing about dynasties is that while they enthrall us over time, we don’t think about the auspicious beginnings. It may take a cup full of championships and a few contending seasons in between to take a long, wistful look into what we actually witnessed.

So, after watching the New England Patriots and Pittsburgh Steelers define much of the last decade, is it possible that the New York Giants are building one and we don’t even know it?

All the guffaws of how the team made two Super Bowl runs in the last four seasons might say otherwise. For the first, it’s easy to lament on how Eli Manning rode a hot streak by the defense and a strong running back trio in the final weeks of the season, got a couple of lucky throws and Tom Coughlin didn’t kill Lawrence Tynes after two missed field goals in the NFC Championship Game.

Despite playing even better in 2008, as well-documented, things fell apart on Nov. 28when  Plaxico Burress did what most New Yorkers learn not to do: go to the Latin Quarter. Losing three of the last four regular-season games and getting stunned by Philadelphia in the divisional round were mostly pinned on that fateful night.

Most on the outside believed that there was something more than a post-Super Bowl hangover. Instead, for two non-playoff years in 2009 and 2010, they said that Burress's accidental shooting hung over the team like a black cloud.

Fast forward to the present and the buzz around the champs differs some from four years ago. In fact, as even said during the title run in January, this is a different team from the one that ended New England’s pursuit of perfection in Super Bowl XLII (42). This team doesn’t have the overt clichéd "swagger" that would make them a bigger target than a Lombardi Trophy provides. Hell, they still don’t get credit for taking care of business where their opponents didn’t.

Instead, the confident Giants purposely have blinders on toward a football nation that barely looks in their direction.

The certain similarity between the two Super Bowl teams is that the offenses were actually better the next year out. With respect to what Brandon Jacobs provided in seven seasons for the Giants, drafting a running back was as much a priority as retaining key free agents. In the preseason, David Wilson honestly looks like Ahmad Bradshaw circa 2007 with a tremendous burst of speed and an overlooked pass-catching ability that could make him Eli’s safety valve in short order. So long as the Bear Pascoe/Marcellus Bennett combination replicates anything the tight end position gave them last season, Hakeem Nicks isn’t slowed by offseason surgery, and Ramses Barden finally becomes the receiver expected of him, this offense can ideally become the NFL’s most complete.

As said prior to Super Bowl XLVI (46), Tom Coughlin has the trust of his players arguably more than any other coach not named Bill Belichick. No matter the changes in his coaching staff (especially on defense), his steady hand is one of the few in a constantly revolving door of NFL head coaches. Add the shrewd scouting and development from general manager Jerry Reese and his staff, and there lie two of the most important components to a NFL dynasty.

A third, and arguably the most important, lies under center. Eli Manning should become the Giants career leader in touchdown passes by the first snowfall of the season (15 short of Phil Simms), and can conceivably notch the completion record as well. Probably more impressive is that he was 67 yards short of throwing for 5,000 yards last year; three quarterbacks – Drew Brees, Tom Brady and Matthew Stafford — all tallied 5K last year. There’s not a quarterback in the game that has shown as much season-by-season improvements in a few seasons than #10, and it shows in how many receivers and tight ends have found success with him.

So, what will it take for Big Blue to get in the position to do it again?

The league’s best pass rush needs to be complimented with a better, let alone healthy, cornerback tandem, for starters. The offensive line has to continue to maintain its stride, despite another offseason of changes. Special teams must play like they never want to be embarrassed by DeSean Jackson ever again. And of course, Eli needs to be … well, Eli.

Not too long ago, many contemplated the status of the Pittsburgh Steelers as they notched two championships in four seasons and played for a third in the decade before losing to Green Bay in Super Bowl XLV (45). Even with the change from Bill Cowher to Mike Tomlin, there were those mainstay components of bold coaching, smart management, a powerful defense and a quarterback whose game improved over time. Maybe it was because there was more sentimental air around them with the retirements of Cowher and Jerome Bettis or a greater reverence for the enduring blue-collar ethos of Pittsburgh against whatever New York/New Jersey stereotypes you choose.

Considering that, a third Super Bowl in five years is not as farfetched as you’re led to believe. And if that actually happens, maybe, just maybe we can speak of these New York Giants in dynastic terms.

5 Replies to “Big Blue Dynasty? Can This Be The Era Of The New York Giants?”