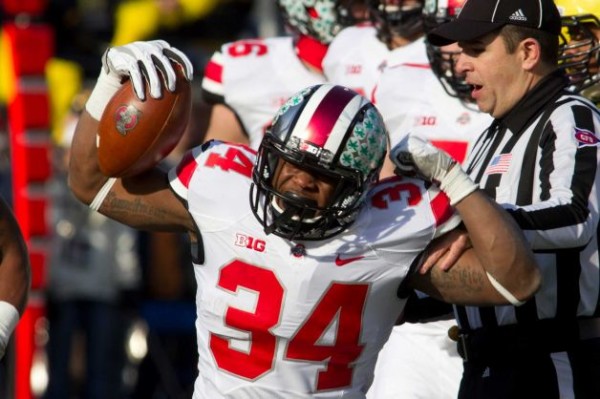 We’re going to hear a lot of talk over the next few weeks about whether a one-loss Auburn team should jump over an undefeated Ohio State team. Since this is the last year before the end of the BCS system, if there isn’t going to be the “five teams undefeated at the end of the year” controversy, ESPN is going to have to manufacture another one to create page clicks. Though I don’t respect OSU's record (or OSU in general for that matter), I don’t believe OSU needs to take a backseat to Auburn.

Let’s talk about OSU for a second. When the season started, OSU had been ranked as the #2 team in the country after going 12-0 in the previous season. Instead of taking a look solely at last year's record, I actually looked at the OSU's schedule. As you can imagine, the Buckeyes' schedule was toilet-tissue soft. OSU’s most impressive victory last year was a 63-38 shellacking of the Nebraska Cornhuskers. OSU beat MSU by one point, Michigan by seven points, needed overtime to beat Purdue and Wisconsin, and managed to beat UAB by an amazing margin of 14 points.

With that said, the Buckeyes still somehow managed to find themselves as the #2 team in the country. Voters, for whatever reason, liked OSU enough to put them there while being aware about the lack of challenge in the previous and upcoming schedule. More than anything I want OSU to play in the title game, if for no other reason as a personal finger to the people who put Ohio State in that position in the first place. If nobody wanted OSU to play in the title game, the team shouldn’t have been ranked as highly in the first place.

OSU can’t help it plays in a weak conference. But still, it’s the B1G Ten conference. A “power” conference as ESPN and others would tell it. Being that it’s an automatic-qualifying conference (AQ), that means the Buckeyes have to be given the same chances as other AQ conferences. I understand the trepidation about letting OSU in. If you want to look and see where the SEC dominance of BCS title games started, OSU will be found on the wrong side of  history. Twice. OSU was badly outplayed in both games. (For even more SEC/OSU embarrassment, don’t forget OSU managed to lose to Florida twice that year. Once in the BCS and once in college hoops in the championship game.) 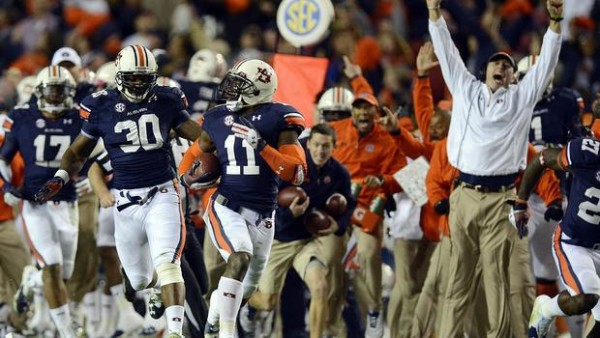 Auburn “We Only Need 1 Second” Tigers

Auburn has had quite the season. Somehow, with a converted defensive back playing QB in Nick Marshall and an anemic passing offense, the Tigers managed to find themselves at 11-1. Reports say that of the currently top-five ranked teams in the BCS, Auburn had the hardest schedule of the year. There is nothing you can take away from a team that has the hardest schedule of the group and still manages to come away with 11 wins, including two miraculous wins (one coming at the hands of the #1 team in the country). In short, if there was only one undefeated team and the rest were a smattering of one-loss teams, leaving Auburn out of the title game would be absolutely criminal. The problem is, Auburn lost and I'm not exactly confident in saying the Tigers are the #3 team in the country.

College football is strange in that it doesn’t really lend itself to the neat and tidy logic of wins and losses. There’s an undefeated Northern Illinois team that won’t even sniff a BCS championship game because it's NIU. Yeah, the Huskies are 12-0, but it’s widely assumed that 12-0 record is a sham because of the conference they play in. People are happy with rewarding NIU with a BCS game, but NIU is not getting invited to the big dance. College football fans can swallow that particular fact with ease because that’s how the sport has conditioned its fans.

Auburn is 11-1 and played the 26th hardest schedule in the country. I have no problem with Auburn needing the last second to beat the two-time defending champions. We can tip our hats off to that. But I think people also forget that Auburn needed a last-second prayer to beat a struggling Georgia team — the same UGA team that has been ravaged by injuries all season. Or how about the fact this Auburn team actually lost to a three-loss LSU team? Are we sure Auburn is the actual #3 team in the country based on the QUALITY of wins and losses, or do we just give the Tigers the benefit of doubt for winning 11 games? Is the BCS title game supposed to be about #1 vs. #2 in the country of the supposed two best teams in the country? If Auburn was truly one of the best teams in the country and OSU's schedule was so widely panned, then why let OSU stay in the top five all year?

I know that last paragraph was full of questions, but it's something to take note of. If OSU's schedule wasn't respected all year, there was plenty of time to vote the Buckeyes down so the conundrum of deciding between OSU and Auburn wouldn't have been needed. Waiting until the last minute to shove a one-loss SEC team in there as a "my bad, we really didn't think we needed to worry about this because we were happy with five undefeated teams potentially creating another BCS problem" is, in a word, stupid.

Let’s Play The “What If” Game?

For a bonus round, I’d like to talk about what would happen if both Auburn AND OSU manage to lose their respective conference championship games. Alabama is currently sitting as the #4 team in the country. Should OSU and Auburn lose, that’d likely make Alabama #2 in the country, with Mizzou likely being almost neck and neck in the BCS polls as #3. Now, if this manages to happen, I can only imagine what the discussion around the country is going to be then. "Should the two-time defending champion be allowed to defend its crown even though Bama didn’t win its conference (again)? Should a former Big 12 team who didn’t have to play LSU or Alabama be allowed into the BCS title game?"

I don’t like OSU, but if the Buckeyes go 12-0, they deserve to be in the title game. Auburn has had a remarkable year and took down a giant, but at the end of the day, Auburn lost. Toilet-tissue soft schedule or not, leaving out an undefeated OSU team to shove in an SEC team is just a ridiculous way to do business (ask Oklahoma State). I pray that this weekend balances everything out, with Ohio State winning and Auburn losing, so we can all calm ourselves knowing that nobody is seriously going to want Mizzou in the title game over OSU. At the end of the day, so long as FSU goes to the BCS title game, I couldn’t care less who shows up because FSU is very likely going to destroy them anyway.