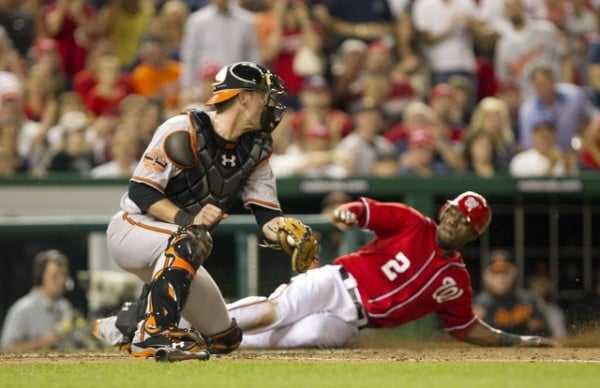 Take a look at the standings in the vaunted Eastern Divisions in Major League Baseball and try not to spit out your coffee. Those aren't misprints.

Two months into the 2012 season, the AL and NL East have been flipped on their respective heads. On the AL side, the Baltimore Orioles are no longer at the bottom looking up at the big, bad Yankees and Red Sox. Instead, it is Baltimore sitting atop the division with Tampa Bay, while the Sox and Yanks attempt to play catch-up.

Meanwhile, on the senior circuit, the young Washington Nationals have grown up quite fast, no longer playing little brother to the likes of Philadelphia and Atlanta or taking the back page to the Marlins and Mets. Washington is pacing the division many perceive as the best in the National League.

That's right; with nearly a third of the season already played, the beltway cities sit atop the standings.

It wasn't supposed to be this way, of course. Sure, there were plenty of people believing the Nationals, behind a young infuse of talent to go along with some nice offseason acquisitions, would make ground. Some even picked them to get to the postseason. But the NL East has belonged to the Phillies the past few years, Atlanta before that, and the Miami Marlins were supposed to be the true next threat with Ozzie and Reyes and Buehrle on board.

On the other side, no one in his or her right mind thought the Orioles would be playing as well as they have. The AL East has been a three-team division for years now, and pretty much everyone expected more of the same. The Red Sox would bounce back after their epic collapse with new manager Bobby Valentine to duke it out with the Rays and Yanks. Except here were are, with the Sox (just like the Phillies) sitting in last place, while the Orioles are right there keeping pace with Tampa Bay.

So how, exactly, did we get here?

Of course, we all know the Nationals are building around Stephen Strasburg and Bryce Harper joining forces with young superstar Ryan Zimmerman. The two rookies have certainly impressed. Strasburg is among the NL leaders in strikeouts and ERA to go along with his 5-1 record. Harper has been so poised and so impressive both offensively and defensively that his every movement is being documented.

But as impressive as Harper and Strasburg have been, it hasn't been that young dynamic duo leading the charge. It hasn't been Zimmerman either. The Nationals' de facto best player heading into the season has gotten off to a slow start exacerbated by a stint on the DL.

It's actually been a newcomer and a relative unknown who have kickstarted the franchise formerly known as the Expos. 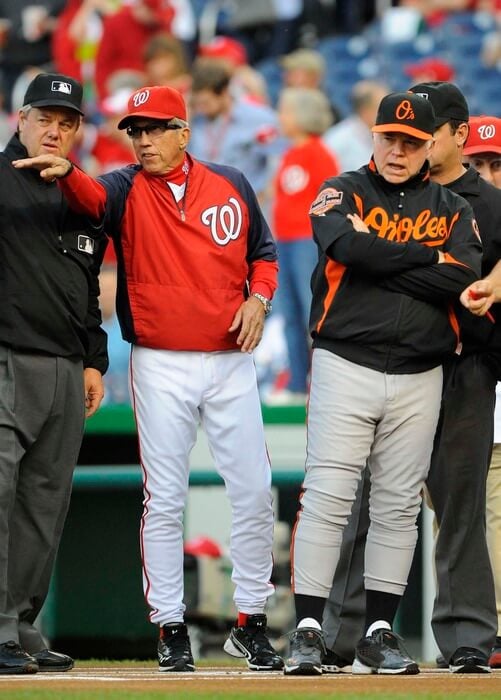 Everyone knew that Washington was getting a talented young southpaw entering his prime years when Gio Gonzalez became a National. I'm not sure anyone knew he'd be the one stealing headlines from the phenom that is Stephen Strasburg. Yet Gio has done just that, pacing the Nats with a 7-1 record, 2.04 ERA (3rd in the NL), .094 WHIP and MLB best .156 opponent's batting average against. He also leads Major League Baseball in strikeouts and is among the early-season favorites for the Cy Young.

No one is surprised that Washington has itself a bona fide Cy Young candidate. However, most thought that guy would be Strasburg (who just may be in the discussion himself), not necessarily Gonzalez.

Offensively, it's 32-year-old vagabond Adam LaRoche — not Zimmerman or Harper, not Ian Desmond or Danny Espinosa — doing the heavy lifting. LaRoche, of all people, leads the Nats with eight home runs, 35 RBI, a .289 batting average, ..386 OBP, .528 slugging percentage and .915 OPS. And he does it all while playing a pretty slick first base. All this from a guy who wasn't even supposed to be the starter over there with Mike Morse coming off a breakout 2011 campaign. But with Morse still waiting to make his 2012 debut following a lat injury, LaRoche has become Washington's most dependable bat.

For Baltimore, a more likely candidate has emerged as the lead dog. Fresh off a newly-signed contract, Adam Jones has taken another step forward in becoming a true superstar in the game. He leads Baltimore in nearly every significant offensive category, and he's among the league leaders in runs (35), hits (61), home runs (14), slugging (.588) and OPS (.935). He's batting over .300, playing gold glove-caliber ball in centerfield and pulling his teammates along with him.

With players like Chris Davis, J.J. Hardy, Nick Markakis and Matt Wieters teaming with Jones, the Orioles are pounding the ball out of the ball park and scoring plenty of runs. Of course, offense hasn't really been the issue with Baltimore the past few years. It's been the pitching.

Suddenly in 2012, that has changed. The Orioles, led by Jason Hammel and Wei-Yin Chen, have the fourth-best team ERA in the AL, something truly remarkable given the pitching woes this franchise has endured since Mike Mussina headed north on I-95.

Hammel and Chen have gone a combined 10-2, and players like Brian Matusz, strikeout machine Jake Arrieta and Tommy Hunter have the talent to help improve the staff even more.

Now, there is still a whole hell of a lot of time left to go, and we all know baseball is a marathon, not a sprint. There are no guarantees that either team in the beltway will make the playoffs, let alone win the division. After all, less than five games separate first from last in both the NL and AL East, with every team currently sitting at .500 or better. No one would be shocked if the surprising Orioles or young Nationals fall off, while the more veteran, higher-payroll teams asserted themselves down the stretch.

Whether the Orioles and Nationals can stay on top all season is unclear. However, it's crystal-clear that both franchises have an abundance of talent and are creating higher expectations by the day. Two months in, there is no denying that baseball is back in the beltway, and back in a big way.

3 Replies to “Baseball Is Back In The Beltway”