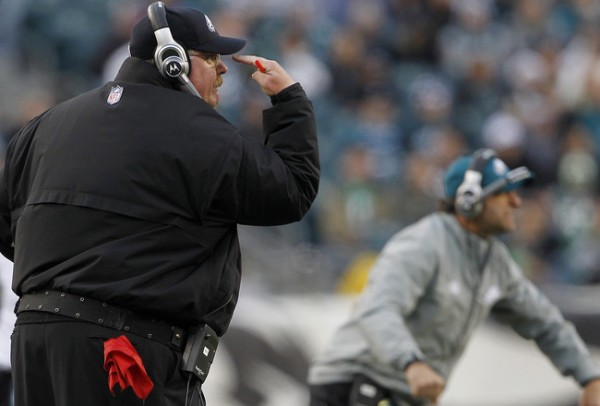 Andy Reid has been both wildly successful and highly infuriating since he took over the head coaching duties for the Philadelphia Eagles in 1999.

He selected Donovan McNabb with his first draft pick as an NFL head coach. With McNabb and the late, great Jim Johnson calling the defense, Reid took the Eagles out of the dregs of the Ray Rhodes and Rich Kotite eras to become a perennial contender. But as Philadelphians will remind you, he's also never brought home the ultimate prize.

Over the years, there's been two camps on Andy Reid, both staunch in their beliefs. At the same time, Reid's been brilliant and maddening, great and atrocious. He's been praised and despised, respected and disrespected.

But one thing Andy Reid has never been in his nearly 13-and-a-half seasons in Philadelphia is scared. His confidence has never been questioned, his football philosophy always a staple of his teams through and through, critics be damned.

Suddenly, that is no longer the case. With the news that Andy Reid fired his defensive coordinator, former offensive line coach Juan Castillo — a man that he baffling promoted to the position despite the fact that he had never coached an ounce of defense professionally — it is clear as day that Reid finally has his doubts and is now running scared. And rightfully so.

After all, it was Reid who put Castillo in a position to fail, and it is Reid who has overseen the gradual decline of a team that went to five NFC championships with Donovan McNabb but has not won a playoff game since.

He is now, finally, showing fear. How else can you describe Reid firing the man he promoted just one year ago when Castillo has actually seen an improvement in his unit? The firing is Reid pointing his finger at someone else, desperately trying to divert attention away from his own ineffectiveness, just as Kissing Suzy Kolber's Danger Guerrerro laid out:

The Philadelphia Eagles have jumped out to a disappointing 3-3 start, due mainly to an offense that is 31st in the league in scoring and has turned the ball over 17 times (including 13 by quarterback, Michael Vick). In an attempt to turn things around during the bye week, the team announced today that it has fired offensive coordinator, Marty Mornhinweg.

Reid's quote in the Philadelphia Inquirer yesterday is even more head-scratching:

"We're six games into the season and average isn't good enough," Reid said in a statement. "I know the potential of our team and insist on maximizing it."

Yes, Reid is right. Six games in, average isn't good enough. But apparently incredibly below average is? I mean, that's effectively what Reid is saying with firing Castillo while retaining Mornhinweg and even himself. Juan's defense was average, literally right in the middle of the pack in the NFL through six weeks. Given the three straight weeks of allowing the opposition to march down the field for the game-winning field goal attempt — two that went through the uprights and one that did not — and the total lack of a pass rush, the defense left plenty to be desired.

But the defense, while certainly contributing to this team's mediocre record, isn't the major problem through six weeks. It's that offense — you know, the one that ranks second to last in the NFL in scoring, with only the offensively-challenged Jacksonville Jaguars and their 13 points a game faring worse than Philadelphia's 17.2 points per contest, and the one that leads the NFC in turnovers with 17 — that is really killing this team.

However, it is Reid and his right-hand man, offensive coordinator Marty Mornhinweg, who are in charge of the offense, so it's better for him personally to throw his defensive coordinator under the bus to distract from what's really going on here. 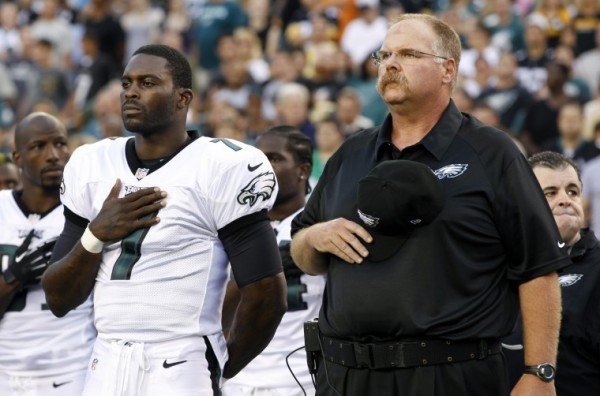 And what's really going on is that Andy Reid is losing control of this team, something that has been slowly happening since the departures of Donovan McNabb and Jim Johnson.

During his tenure as head coach, Reid has won exactly one playoff game without McNabb under center, a 23-20 victory against the New York Giants in 2007 with Jeff Garcia under center for an injured McNabb, and he has exactly zero playoff victories without Jim Johnson by his side. The Eagles haven't won a playoff game since that NFC Championship game loss to the Arizona Cardinals, and they have regressed every season since 2009, when the McNabb-led Eagles finished 11-5 before bowing out in the first round to the Dallas Cowboys.

The following season, after starting shaky, the Birds finished 10-6 after Michael Vick became the starter and played the best football of his career. But Vick regressed toward the end of the season, the Eagles lost in the first round to the eventual Super Bowl champion Green Bay Packers, and it's only gotten worse since.

Last season was an 8-8 debacle, with turnovers, penalties and a coach's words falling on deaf ears. This year, it's about the same, with Vick playing as poorly as he ever has, the offense sputtering and the team looking disinterested for long chucks of games. It's getting harder and harder not to look at Andy Reid and think perhaps maybe his time really has come up.

He has had great success as the head coach of the Eagles, but that great success is a thing of the past — just like McNabb and the late Jim Johnson. They were his running mates. Without them, Reid has looked lost, and his team has looked remarkably less competent.

Believe me, I respect everything Andy Reid has done, and I've tried harder and harder to root for the man who has so routinely infuriated me and my fellow Eagles fans, especially this year.

But the fact remains that Andy Reid has slowly been losing his locker room for the past few years, and now, with the pressure reaching an all-time high not only from the fans but from the front office, Andy Reid is showing something he never has in his 13-plus years in Philadelphia: Fear.

Unfortunately for Juan Castillo, that fear has cost him his job.

The question remains, will it cost Andy Reid his?