The year 1993 was one defined by transition. Michael Jordan retired from the NBA to pursue a baseball career. Bill Clinton was inaugurated in office as the 42nd President of the United States. And, most importantly, the infamous "Aunt Viv switcharoo" went down. For as classic a show as The Fresh Prince of Bel Air was, that one moment stands as one of the oddest in sitcom history. You see, the original Aunt Viv - Janet Hubert-Whitten - was the backbone. She was the glue, the strong Black mother and, for what it's worth, the finest example of a classy African-American woman not named Clair Huxtable. Then, out of the clear blue sky, Aunt Viv returned as Daphne Reid with no real explanation as to why until years later.

I say all of that to say this. Change is inevitable, and is often times not the easiest thing in the world to accept.

The other day I found myself in an interesting conversation highlighted with an even more intriguing question. Is Aaron Rodgers on his way to making Brett Favre irrelevant in Green Bay? So we're clear, the transition from Favre to Rodgers was the most uncomfortable since the Aunt Viv swap. The only difference being we knew eventually Rodgers would take over. We just didn't know when or how. Prior to the start of the 2007-2008 season, following Favre was damn near seen as career homicide. Rodgers had been made a fool of in the 2005 draft and now the poor guy had to replace a living legend.

Now, where there's yin, yang is always present. He didn't leave Green Bay on the greatest of terms and Aaron Rodgers received an undervalued and all but extinct luxury in today's NFL. He sat on the sidelines, with a clipboard attached to his hip, kept his mouth shut and watched as Favre played his last valiant years as a Packer out until his time emerged. That time came and before Favre could realize what happened, the change had been made and the journeyman era of his career was underway. It's almost like what Ace did when Calvin got knocked in Paid In Full.

We see Rodgers now as this elite quarterback, but check these stats since becoming the full-time starter. 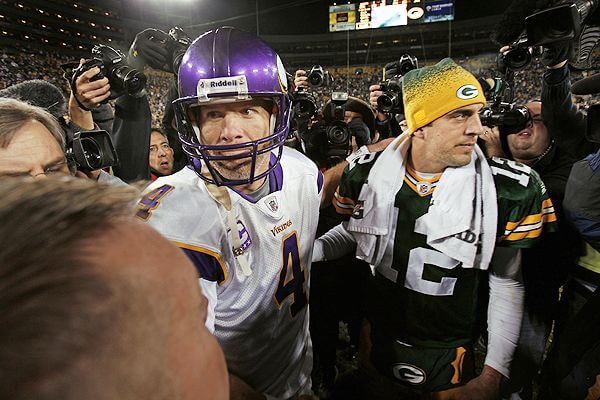 He's always been good. Now, we're watching the era in a player's career when they transform from really good, to great to "holy-sh*t-this-may-be-a-Hall-of-Fame- run." Even with his team stung by injuries throughout 2010, Rodgers' ability to see the bigger picture and have his own confidence affect all three facets of Green Bay's game was Farve-esque. With Brett there, the Packers knew they were never out of a game and 2010 sealed the deal for Rodgers. With their playoff hopes on the line until the very last week of the season, A-Rod entered and is still currently in "The Program zone" - by that I mean each play moves at this speed. He helped bring the Eagles back down to Earth, embarrassed Atlanta something serious and hoisted the championship belt in the NFC Championship game against Chicago. Then came the Super Bowl where he did something Favre was never able to accomplish: take home MVP honors.

Through nine weeks this season, Rodgers only has 73 incompletions. In fact, the last three games he only has 22 incompletions to 11 touchdowns. There hasn't been a run like this since the 2007 Tom Brady. And the Aaron Rodgers we're witnessing right now is the best football player in the world, with some distance between he and #2. A lot of times, appreciating greatness, while in this case is still evolving, is the hardest thing to do. But once realizing Rodgers may not even technically be in his prime yet, the best years for Green Bay could be in front of them. Scary to think, right? Injuries, contract disputes and all around bad karma not withstanding, the city of Green Bay could very well go 25+ years of having a top five quarterback.

So that brings everything full circle and back to the question at hand. Is Aaron Rodgers on his way to making Brett Favre irrelevant in Green Bay? If the Packers eventually go on to repeat this year, the hype around A-Rod would suggest yes. He'll have two rings to his predecessor's one, and ultimately, championships speak volumes. Plus, his career still has chapters that need to be written. He'll not only have hardware on his side, but time as well which may be more important than any other factor.

Still, "irrelevant," like "best ever," is subjective to the person answering the question.  One thing is for sure though. Some three years following the ugly departure of Brett Favre, the show is still going on and finding massive success with A-Rod at the helm. Just like the "Aunt Viv switcharoo" of 1993.