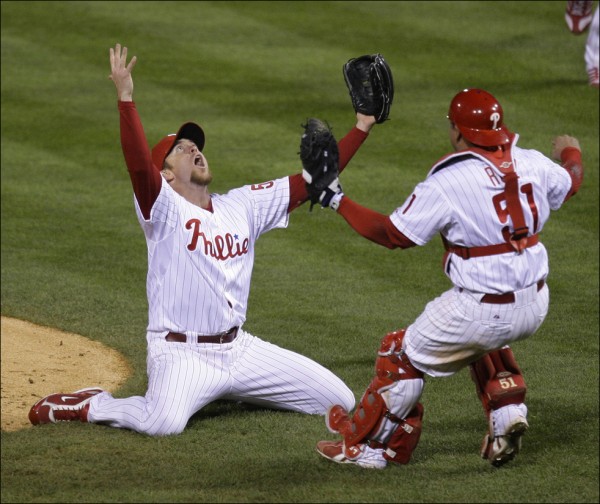 The closer is one of the most pressure-packed positions in all of sports. The Mariano Riveras and Trevor Hoffmans of the world are the exception to the rule. They've made the closer position look effortless, sustaining excellence for nearly their entire careers.

But the life of the mere mortal closers is one of wildly successful highs and psyche-crushing lows. And no closer in the history of baseball represents that dichotomy better than Brad Lidge, who retired from Major League Baseball over the weekend.

Lidge began his career as a heralded draft pick out of Notre Dame. The Houston Astros drafted the flame-throwing righty with the 17th overall pick in 1998, and four years later, he made his MLB debut. But it wasn't until this third year in the bigs that Lidge really found his niche.

That's when he became Houston's closer, taking over duties from fellow flame-thrower Billy Wagner, who departed to Philadelphia. Lidge took to the role naturally, combining a high 90s fastball with a disappearing slider, firmly entrenching himself as the man at the back end by completely dominating each time he went out there. Just look at his 2004 numbers: 29 saves, 1.90 ERA, 0.919 WHIP, 157 strikeouts in just 94.2 innings. He continued to pitch well in the postseason as the Astros made it to the NLCS before losing to the Central Division winner and eventual World Series champion St. Louis Cardinals.

The Astros were riding high and once again advanced to the NLCS to take on the Cardinals in a league championship rematch. That's when Lidge self-destructed in one outing, surrendering one of the most infamous home runs in postseason history to Albert Pujols — a ball that still hasn't landed. 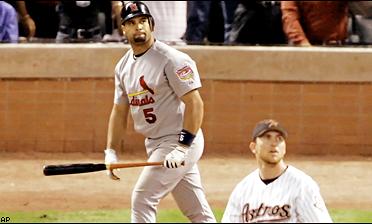 What people forget is that Lidge was actually really good that postseason outside of that pitch, and the Astros actually topped the Cards before falling to the White Sox in the World Series.

However, that pitch would be a turning point in Lidge's career. Clearly, that home run was in his head, and he couldn't escape it. It was on the highlight reels all season and even after. Hell, it's still replayed time and time again.

The following season, Lidge was nothing like his usual self. He posted an atrocious 5.28 ERA, struggled with his control and couldn't get back on track. It was the lowest of lows, and he ultimately lost his closer job the following season. It looked like Lidge was a flash in pan as so many closers before him were, just looking to latch on as a bullpen piece somewhere.

In the offseason, he was traded to an up-and-coming Philadelphia Phillies team — following in the footsteps of Wagner again — where his career took another drastic turn.

Despite his struggles, the Phillies, coming off their first NL East title in a long, long time, brought in Lidge to be the hammer at the back end of the bullpen. The rest, as they say, is history.

Lidge rewarded their faith by putting forth quite literally a perfect season, converting on 41 of 41 save opportunities in the regular season and remaining perfect in the postseason with five more saves. It culminated with the first championship in Philadelphia in 25 years, and only the second in Phillies history.

The image of Lidge, on his knees following striking out Eric Hinske, is etched in Philadelphia lore, and the call by the late, great Harry Kalas still rings in every Philadelphian's ears.

That was the pinnacle, and it looked as though perhaps the young Brad Lidge had returned for good. But that wasn't the case.

Just as quickly as he went from the bottom to the top, he fell off the cliff again, struggling with injuries and inconsistency.

Ultimately, the Phillies lost faith in Lidge after that, and he eventually lost the closer role for good to his former setup man, Ryan Madson.

As the Phillies built themselves into an annual contender, Lidge's role reduced, the man who helped usher in a new boon in Philadelphia baseball pushed aside. Before it was all said and done, Mr. Perfect faded away unceremoniously, playing just 11 games in an injury-filled season last year as a member of the new kid on the block Washington Nationals.

As a lifetime Phillies fan, Brad Lidge will always have my ultimate respect. Without him, the Phillies never win the 2008 World Series, and I'm still living my life without ever seeing a professional Philadelphia sports team win a title.

Brad Lidge was the perfect example of the life of a closer, with all his highs and all his lows. And he'll be remembered always for both.

Good luck in your after baseball, Mr. Lidge. And if you're ever back in Philadelphia, believe me, you'll never have to pay for a beer the rest of your life.

One Reply to “A Tribute To Brad Lidge, The Perfect Closer”