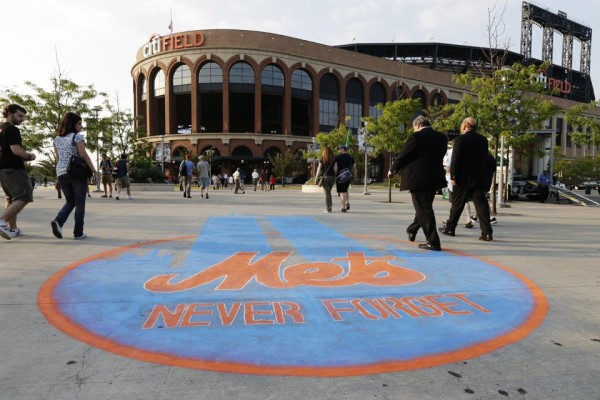 The mantra was a loud and powerful drumbeat that was seared into our conscious twelve Septembers ago. In the days, weeks, months and initial years after the September 11th attacks, Never Forget was as much a national rally cry as much as it was a warning to a world fearing the American response.

Twelve years later, the cry is revived on anniversaries, almost ad nauseum and unfortunately at times, in questionable taste.

There were moments of silence throughout the nation Wednesday night, but certainly throughout the NYC metropolitan area, the DMV and western Pennsylvania, these observances are always more still. Attending a public event on the anniversary for the first time - the New York Mets hosted the Washington Nationals - I expected that drumbeat to steadily fill the Citi Field air. I expected this to be a somber night that stood to prove that this city not only remembers (and rebuilds), but leads the country in displaying resilience from adversity.

Awaiting fans exiting the Mets-Willets Point 7 train station was a chalked ceremonial logo - the silhouette of the Twin Towers in blue over the team’s script. Between innings, there were reflections played on the centerfield display; reminders of why everything on this day just felt a little bit more. There was a slightly stirring rendition of God Bless America; our singer brought emotion, but even she seemed a bit fatigued by twelve years of remembering. There were the caps adorned by the teams; the Mets wearing their traditional caps with an American flag because Heaven forbid they wanted to pay homage specifically to the region’s emergency personnel, the Nationals with their road navys and patriotic-themed alternate jerseys as they shared kindred spirits with these Mets for one night.

And yet, with the sparse crowd and a full day of observances, either this sporting bubble was either putting up its best possible face in a game of little meaning or was just plain exhausted of it all.

It was strangely normal.

There was still a kiss cam, with one couple awkwardly going full tongue like she whose last name rhymes with virus. There was still the “Find the Bag” game where under one of three Mets caps, a bag of Wise potato chips was waiting to be found by an adorable pre-teen girl. There was still the seventh-inning stretch tradition of Take Me Out to the Ballgame after we paid homage to the American flag. There was still the crazy dancing fan - three empty seats to my left, nonetheless - who at one point pulled off something akin to Barry Cofield’s sack dance.

There was a baseball game featuring two teams playing out the string. The hometown Mets, long ago bounced from playoff contention by Bernie Madoff, were mathematically eliminated on this night. Zack Wheeler pitched well enough to have won if, once again, the New York offense gave him some run support. The visiting Nationals are still holding out for a scant chance at a Wild Card spot as their World Series dreams were brushed back by lofty preseason hype and the Atlanta Braves. Dan Haren didn’t exactly have a throwback night, but the ultimate ‘great stuff, maddeningly inconsistent’ veteran pitched quite well, Ryan Zimmerman homered and Rafael Soriano ‘untucked’.

There were little here proving the might of an imperfect nation. There weren’t heavily overt displays of New York grit. And though every MLB team features a “This Day in Team History” during the game, the Mets stuck to the template with brief anecdotes of wins in previous eras. (Arriving just after the 1st pitch, I’m not sure if the team chose to replay images of that incredible return to baseball ten days after the attacks or not, but I’m surprised it didn’t happen in place of “This Day in Mets History”.)

“Normalcy” on this day in New York City is always scrutinized, especially as it is in the midst of election season. The apparent victors of Tuesday’s primaries have a silent agreement with their city to take a day off from campaigning before making the stretch run to Election Day (although one candidate was still grasping straws for a runoff). As some of the public faces of the metropolis to the world, they tried their best to balance remembrance with said normalcy. September 11th is quietly observed by most of us private citizens here, but whether an elected official or professional athlete, a public figure is sort of required to look back for a nation on our behalf. Those Mets and those Nationals served in those roles by playing their games.

The wonderful friend who scooped up the tickets mentioned an acquaintance who once said that after the fifth anniversary of the attacks in 2006, she started to sense some form of September 12th. Sitting at field level, observing the crowd’s typical groans about their young Mets team and catching friendly banter between stadium employees and fans, I couldn’t shake how amazingly normal the night felt. New York City has endured plenty of trials, tribulations and culture shifts in the years after the attacks, yet it didn’t seem too far fetched to wonder if it found some form of 9/12 over time as well.