While it is far from the first time anyone had ever issued the challenge, Seattle Seahawks defensive end Michael Bennett believed that the ongoing discussion over protesting during the ‘Star-Spangled Banner’ is missing something. From Wednesday’s edition of ESPN’s SC6:

“It would take a white player to really get things changed because when somebody from the other side understands and they step up and they speak up about it … it would change the whole conversation. Because when you bring somebody who doesn’t have to be a part of [the] conversation making himself vulnerable in front of it, I think when that happens, things will really take a jump.”

Anyone reading this has heard, if not directly sounded, the clarion call for black and brown sports figures to follow in the footsteps of Jackie Robinson, Muhammad Ali and others their whole lives. In recent years, expectations for black and brown athletes to be more than their professions were raised since Trayvon Martin lost his life. But from the very moment that Colin Kaepernick told the world he was sitting (and eventually kneeling) during the anthem a year ago, those same expectations found even newer heights.

Bennett’s quote speaks solely about the national anthem, but it’s symbolic of a greater demand now coming from the increasing ranks of black and brown sports figures. When will a prominent white male professional athlete speak out about the injustices in America?

But even when one does speak directly about the issues that hover over the nation, there’s another question to be considered: will that player and that particular moment even make a difference?

Believe it or not, we have a few clues. Remember when future Hall of Famer Aaron Rodgers took time in a post-game press conference to call out the fan who screamed ‘MUSLIMS SUCK!’ during the moment of silence for the victims of the November 2015 terrorist attack in Paris?

Rodgers was rightfully praised for his words, and that condemnation also created a new set of expectations… for him. Plenty of people – including some white members of the sports media – were chomping at the bit in hopes that the Green Bay Packers star would become the voice to help expand a growing movement among professional and collegiate athletes to no longer ‘stick to sports.’ While that hasn’t exactly panned out, it’s not entirely wrong to assume that those who applauded Rodgers in 2015 still hold out hope that he’ll break from his sudden cautiousness.

However, while we may not have seen an equally obvious display of disrespect at Lambeau Field since that game, it’s hard to say that Rodgers’ statement compelled a change in behavior among fans that may harbor resentment towards Muslims or any other marginalized group. After all, what’s said and done in private – including at polling stations – speak volumes about who we are and what we value.

There’s also the curious case of one Thomas Edward Patrick Brady Jr., he of the Super Bowl rings, league MVPs and infamous locker room adornments. Perhaps because he had a bit more time to himself to start last season with the Deflategate suspension, the awkward dance around his support for the current President served as a reminder of why Brady stays in his lane, as he did when the tumultuous 2014 NFL offseason played out before us. At the time, Brady’s reluctance to comment about Ray Rice, Adrian Peterson and others was the closest the public has ever gotten to knowing what mattered to him away from the football field. So when Brady started to get questions about his relationship with the MAGA Whisperer, we shouldn’t have been surprised that he bristled against the thought of having to qualify his friendship with the presidential candidate. (It didn’t help that Brady’s wife and retired supermodel, Gisele Bundchen, not only might have disagreed with him but pretty much told the quarterback to keep his mouth shut).

Plenty of Brady’s fans appreciate that he ‘sticks to sports,’ by and large. It could be an extension of being a New England Patriot, where Bill Belichick wants to focus on nothing else but the next game. It could be influenced by his off-field endorsement history – from fighting against improper use of his likeness to his curiously crafted pitching of his own products. It could be the rabid support he’s enjoyed in the aftermath of Deflategate. Regardless of why the face of the NFL won’t take the anthem protest to another level, the last three years have shown that Brady was never going to be the Peter Norman of his generation.

Certainly there are white sports figures that have expressed their opinions about political matters, though they’ve largely centered around Kaepernick’s actual protest rather than why he’s protesting. There really isn’t a shortage of that, ranging from Drew Brees figuratively draping himself with the American flag when the protests began to Basketball Hall of Famer and BIG3 coach Rick Barry’s displeasure with the President’s critics in response to another eventful week for the White House.

It’s all the more reason why the Long brothers – Chris and Kyle – stand out as they have. Sons of Hall of Fame linebacker and FOX Sports analyst Howie Long, they’ve shared thoughts on a myriad of concerns from supporting Kaepernick’s right to protest to the harrowing tragedy in their hometown of Charlottesville. They happen to be very good football players, but as players in the trenches – Chris a defensive end in Philadelphia, Kyle an offensive guard for Chicago – they’re not players whom marketing campaigns are built for nor do they have TV cameras trailing them on every play. Thankfully, these are men who don’t shirk from the criticism of touching the third rail of politics, especially when the critiques come from other white males that only see athletes for entertainment purposes.

We also tend to ignore or at least dismiss the efforts of female athletes who take the risk to their own careers to protest and speak on social ills. Megan Rapinoe took a ton of heat for kneeling, including from U.S. Soccer. The WNBA – a league where several of its biggest stars are white – might very well be the most socially conscious sports league in America right now, with countless stories about how players and coaches have worked to simultaneously bring awareness to the public on the issues while educating themselves.

When it comes to the social strife in the United States, minorities have been imploring white America to examine itself for generations. Yet in spite of those brave enough to walk side by side with freedom fighters or those who quietly challenged the status quo, too many white Americans have unfortunately found ways to either avoid such introspection or deny that there’s a need for it. Right now in sports, an arena of society that has always been political in one way or another, if a prominent white male athlete decides to stand up for this ongoing movement, he will be met with the equally loud demand by plenty of white Americans (certainly not all) to sit down. It remains to be seen if he would inspire the ‘slow clap’ movie moment that black and brown America has been asking for, when white Americans finally realize the need for our collective progress.

(By the way, to the white Americans who may be looking for a black friend, this guy isn’t it! Look elsewhere.)

Will A Prominent White Male Athlete Make A Difference In The Anthem Protests?

by Jason Clinkscales time to read: 4 min
Football Am I Really About To Give Up Football? 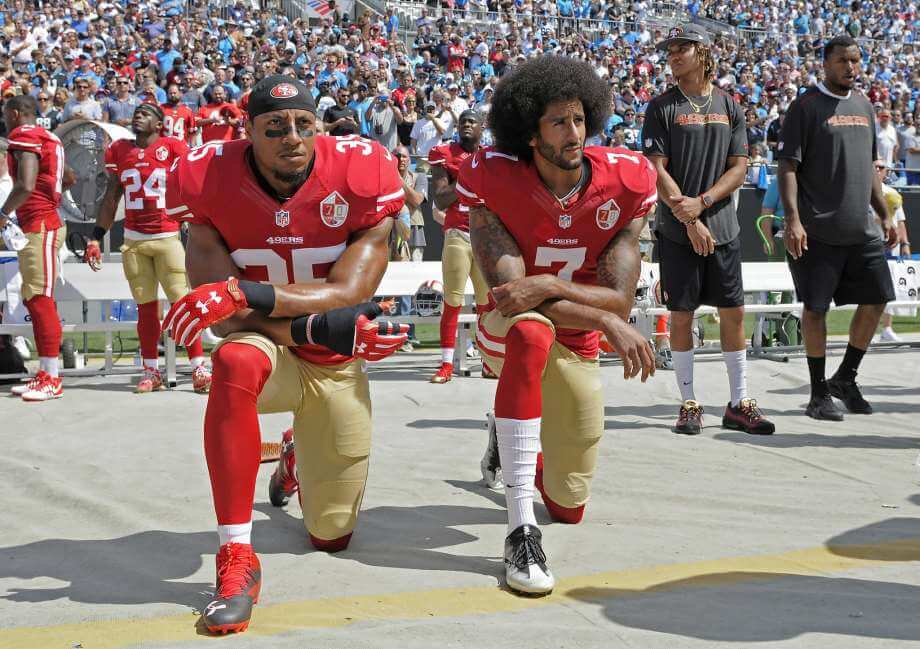