Today, Monday September 30th, marks twelve years since one of the most brutal single-game defensive performances in NFL history.

Despite hanging almost sixty points on the Detroit Lions a week before, the Philadelphia Eagles came to New Jersey seemingly with the basest hopes that no one else would get hurt after numerous injuries afflicted the team before its game against the New York Giants. Without its Swiss-Army knife of a running back Brian Westbrook and several other key players, Philly dragged itself into Giants Stadium with no idea of the hell that would be wrought upon them.

The Giants’ defensive line feasted upon these broken birds for sixty minutes. No one had a worse night on that field more so that Donovan McNabb. New York registered a team-record twelve sacks on the perennial Pro Bowl QB – with six of them coming from Osi Umenyiora as he picked on Winston Justice so badly, even he sympathized with the rookie tackle. (Making his first NFL start in place of left tackle William Thomas, Justice’s name lives in an unfortunate infamy in Philadelphia.)

And for anyone who truly knows football, the difference between a sack and a knockdown is a half-second. McNabb hit the ground 20 more times that night. Somehow what makes both numbers even more stunning was that McNabb was hurried out of the pocket on just about every dropback.

The violence that took place was enthralling if you were watching at home. It may have won some people a few dollars in fantasy football or wagering. And it was an emphatic statement in a NFC East division long on autumn hype, if not always January results.

A reporter for the New York Beacon at the time, I asked Umenyiora about his career night in the post-game press conference, where he quipped that “it was like a video game out there.”

The disbelief in the home side of the stadium paled in comparison to a sight just minutes before as I walked towards the press conference room. Exiting the press lounge elevator, media members typically walked right into the traffic of the visiting team as it heads to its locker room. For those headed towards the Giants’ post-game scrum, they will either see a jovial squad still pumped off a road win or a somber one just dying to wash off the literal and figurative defeat.

But that night, we saw something else, something far more jarring and almost morose.

McNabb needed to be helped to the Eagles’ locker room. Admittedly, my memory of who was providing help exactly isn’t clear, but #5 was flanked by either an assistant coach or equipment manager to his right (my left) and an offensive lineman to his opposite side.

Not to make light of the situation or religion in any way whatsoever, but you would have been hard pressed to have seen McNabb’s state and not think of Jesus Christ coming off the crucifix.

Being below average height, I saw an almost blank stare to go along with his slumped head (McNabb was listed at 6’2” without cleats). I noticed the stuttered gait, the overburdened torso, and a white and green jersey turned Meadowlands brown from an unyielding turf.

As horrified as I was, there was a bizarre disconnect that happened in the walk towards the victorious home team – “damn, Mac is f***ed up for real. But what a game!”

Perhaps this was the endorphin rush of being in the building where history happened. Or the strange reconciliation observers of contact (and combat) sports have between the games’ strategic goals and concussive human costs. But that night was stunning reminder that these men were not just human beings in the emotional sense, but literal flesh, blood, brain matter and bone – and all of it hurts in unconscionable ways to the average person.

It was this thought, this memory, this brutality that came to mind when news of Andrew Luck’s retirement broke during the preseason last month.

We saw multiple clips of the Indianapolis Colts fans booing the 2018 Comeback Player of the Year as the team ran off the field during its preseason tilt. We were lambasted with predictably horrific takes from members of the peanut gallery, many which received as much of a reaction as the news itself. What made those takes so bad weren’t just the entitlement displayed by mediocre TV hosts, the failures of a former coach’s short-term memory, or the politically loaded (and inaccurate) use of “blue collar” as a reason for the crowd’s disapproval. It’s that very few people on earth – not even those in positions we lionize in the public sphere – can sustain and thrive in the life of an elite-level athlete.

While many of us have dreamed of becoming world-class athletes, capable of making lucrative livings out of our trades, our grandiose visions were overwhelmed by both a lack of talent and an unwillingness to push through the type of pain that Luck has endured in the past few years. Those realities don’t make us weak nor do they define our individual worthiness to the wider society. We may dismiss big-time sports as mere “kid’s games” when we’re upset at the fame and fortune their participants receive, but there’s nothing child-like about a torn shoulder or a lacerated kidney.

That there were more voices criticizing than supporting those absurd immediate reactions is a good thing. That the players themselves are more vocal about not accepting the status quo – they exist to entertain the fans that “pay their salaries,” which is a farce in and of itself – is even better.

Say what you will about McNabb – and plenty have lined up to do so during his career – but the very last thing I did that evening was question his toughness, his will, his manhood or even his ego. Instead, I wondered how much more could someone take for a shot at glory.

Twelve autumns later, one of the best players in football asked the same thing. 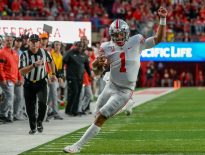