There are plenty of ways to describe the national nightmare that has been Curt Schilling’s post-playing career. Controversial is too safe a word. An abject disaster may be light. Awful? Terrible? Fraudulent, to borrow from his defense of another abhorrent social media post?

How about unsurprising? People like the former pitching great take pride in being unfiltered because it means that someone, somewhere is willing to pay attention and perhaps reward them for “being real.” For six years, ESPN was that someone, another personality who would bring his “provocative” approach to its baseball coverage, notably on Baseball Tonight and Sunday Night Baseball.

Yes, we can scream at ESPN for inconsistently deterring Schilling from espousing his tasteless views in those six years, let alone finally taking a scalpel to a tumor that persisted long after its baseball coverage was diagnosed with this cancer. Yet, what’s done is mercifully done as he was fired from the network on Wednesday night. This had been a desired result for years now, especially when you consider that the network is full of capable analysts who made him obsolete long before he opened his mouth about… well, before he opened his mouth.

Unfortunately for you, dear reader, sports media is no different from any other arena in our society when it comes to well-profiled ignoramuses spouting off thoughts that offend wide swaths of people. The problem, though, is that in highlighting these moments of infamy, we scream at these fools almost as if their prominence in the industry makes them leaders of movements to “make America great again” or “take our country back.” They, too, are followers of philosophies that they would happily ascribe to whether they are public figures or not.

Schilling shared memes inspired by the hostility of people who wrongly believe the First Amendment is some sort of PBA card for ignorance. He typed screeds that were ‘liked’ by similarly-bigoted cowards who blindly follow people that “tell it like it is” despite how wrong “it” truly is. Even his rage against science affected a now-former colleague as he was emboldened by Twitter eggs in an hours-long stream of ridiculousness against evolution (as some recall, Keith Law was suspended by ESPN for actually trying to have a civil discourse with Schilling.)

These moments inevitably doomed him at ESPN, but just as he somehow survived his taxpayer-funded video game company debacle nearly ten years ago, he will find some way to rebound from another self-inflicted disaster. He’ll play Bigot Bingo on Twitter for a few months before he signs on for another gig to mix baseball analysis with pot shots at his former enabler/employer. He’ll find himself with another platform, with another paycheck and with another axe to grind against “political correctness.” He’ll be shamed, but he will never change. Unencumbered of working for the biggest company in the media industry, Schilling will dig deeper, believing transgender persons, Muslims, Hillary Clinton and those blood-thirsty liberals and more (‘the blacks,’ probably) cost him his job.

But what if people like Schilling were treated as they should be by sports media companies — as expenses that may end up being too much to take on. It’s not only that these people are typically mediocre (or worse) at their primary duties to begin with, but their discriminatory opinions make said mediocrity a lot harder to take. Being opinionated may have opened doors for these prime media opportunities — whether as journalists or participants known for being “great quotes” in their active days — but it also caused Schilling and the like to actually burn their own homes down after walking through them.

Where he once dared opposing hitters to match his guile, smarts and deft cutter, Schilling found that in the unstructured world of public feedback, his pitches were hit with more regularity and fury than anything he faced on the mound.

He won’t care much, though, because taking the backlash to heart and learning from these grave mistakes is not who he is. It’s not who he was as a three-time World Series champion. It’s not who he was as a 216-game winner, a six-time All-Star, a member of the 3,000 strikeout club or a borderline Hall of Famer. However, at least for now with those who consume all things baseball, Curt Schilling — his stats and shared memes — will not matter much any time soon. Better late than never, it seems. 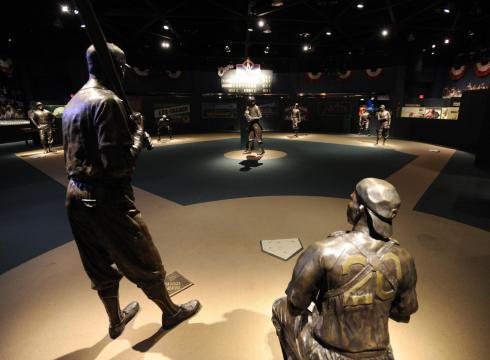 Baseball Mill Valley Little League Gets A Lesson On The Neg…
A Sports Scribe Despite Changes, African-Americans Still Aren̵…
8