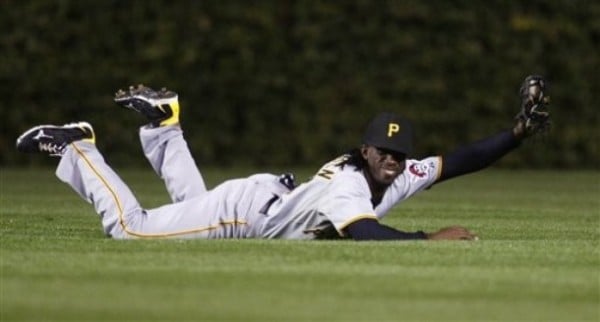 There’s something special happening in Pittsburgh, Pennsylvania this summer. A city that’s become accustomed to the sports summer being nothing but an extended punishment for being so dominant in the winter is getting its gifts early this year. A record-setting losing streak is nearly a thing of the past, and finally, there is the light of day.

Baseball in Pittsburgh has been bad for a while. Barry Bonds leaving town back in ’93 was basically the real-life equivalent of Bane destroying the field that hosted the faux-Steelers home in the summer movie of the moment (that was not-so-ironically shot in the Burgh). Since then the team has been locked in a perpetual cycle of losing without a bit of light shining on it: a run of 18 straight losing seasons. Forget just baseball; that’s the worst consecutive losing streak in North American sports history.

That seminal moment of citywide destruction in Christopher Nolan’s “The Dark Knight Rises,” leading to hopelessness that could only be stopped by the greatest champion the city had, isn’t too far from the truth of the real Pittsburgh. It took the efforts of one, regular yet uniquely skilled man to come back and take on immense odds.

The ice cracked back in 2009 when a 22-year-old centerfielder broke in and donned the Pittsburgh “P” fitted, out to make his way. After less than two years into the task, he confirmed this commitment to the cause by signing on to stay until at least 2018. And now, just three years after setting foot in baseball’s biggest pile of rubble, he’s the unchallenged leader of the biggest turnaround in baseball history.

For three-fourths of last summer, the Pirates sat in as the shock of the baseball world, rising back to first place in the second half of the year for the first time in nearly 20 summers. However, their leader faltered for the first time in his career, hitting only .216 in the season’s last three months … and the Pirates fell from top of the division back toward the bottom again. There was more work to do, and it started with Andrew.

Fast forward a year later. He’s done his part. He’s gotten back up, climbed the mountain again, and his troops are still soaring with him. Cutch is shattering career highs in both power and speed categories, with new peaks in batting average and total bases, while on pace to top nearly every other number he’s posted. He’s become one of the most feared players in baseball because he’s just as dangerous on base as he is lifting pitches over fences.

Most importantly, his return is raising a broken franchise above its own shadow, in a city that long turned its back on baseball. He’s on the verge becoming perhaps the most shocking MVP in recent history by flying past his long, impressive season totals. And he’s still doing it in a stealthy manner, where much of the sports world has yet to hear his voice because it’s based in baseball Siberia, but it’s becoming more and more difficult to even casually pass the game without seeing his mark.

He’s the complete package, both in skill and representation. He’s basically won the batting title already, and it’s only August. What’s more is that’s the surprise outcome; that’s a coming of age skill that nobody called heading into the season. However, his speed, glove and flair for the big play were never in doubt. He’s a throwback in real time. Long before the station-to-station home run game took over, it was about putting the ball in play and making inches into miles. Pittsburgh’s saving grace is rising up the ranks of the game, by playing it in a way that it hasn’t been translated as in a generation plus. It’s the flair showcased all way back to the great founders of the style in the Negro Leagues brought to the table. It’s a classic approach, which is also building new eras of several kinds at once.

He is what the game’s been missing. He is also what the face, the very image of the game, has been missing. He is a shining representative of a fading dynamic in the game: the Black ballplayer. When you look at McCutchen, you see a very common image of the times, but perhaps not baseball. With his dreads flying behind him, he’s not the norm of what baseball showcases, ever. But when he takes his place at bat or in the field, it all becomes both very familiar and very rare at the same time.

For everything that can be drawn in uncommon comparison to what Cutch is accomplishing on the field, there is no player that means more to his team in baseball today. If the Pirates finish their ascent this year, it will not be a fluke, or a miracle. It will be because Pittsburgh's savior did the greatest thing an athlete can do, raise his levels … and not leave anybody else depending on him behind.

7 Replies to “A Pirate Rises: Andrew McCutchen Is Saving Baseball In Pittsburgh”