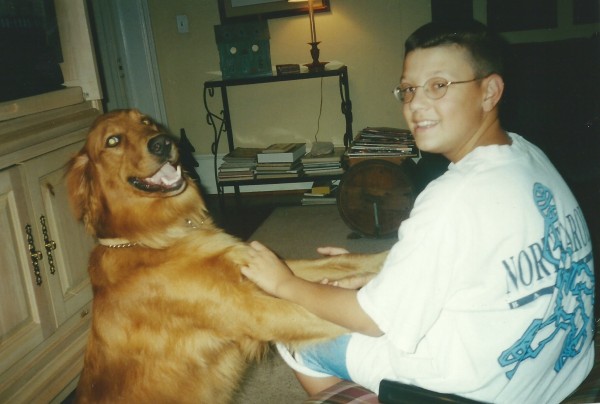 When I was a wee 9-year-old, I received a basket for Easter that included a puppy.

At that point, we were still a year away from the Mark McGwire and Sammy Sosa home run race that brought baseball back.

In fact, during the chase I begged and pleaded and searched for a Chicago Cubs fitted hat. I got the hat, and not long afterwards, the puppy chewed up the brim.

It was the first and last time I got mad at that dog.

My timeline of the events in life is a bit different from many. If you ask me when your birthday is, I'll probably forget the date. If you call me and ask me what grade I was in when the September 11 attacks took place, I'll have to do subtraction on the nearest scrap of paper.

The only way I can remember anything is with sports signifying a date around the time in question.

So, when I look back at how long my good ol' dog was around, I remember it was right before Sosa. I remember that hat.

Saturday morning, my dog was put to sleep. Like the adage, he was a best friend to this man. Also, he was the most consistent thing in my life.

The only thing that comes close is sports.

When I was a kid, I played. I chased the dog to stay in shape for the season. He went to my baseball games; he was there whether we won or lost. No matter how depressed or elated I was at the game's outcome, he was always there to make it better.

Eventually, the participation went away. No longer an athlete, I remained a fan.

As the son of a Hokie, I watched with baited breath as Virginia Tech played - and lost - in the 1999 National Championship. The dog watched too.

When I stayed up beyond my bedtime to see Aaron Boone launch a Tim Wakefield knuckleball into the night, the dog was there.

Through every high and low of my topsy-turvy love affair with the Philadelphia Eagles, the dog remained the same. He sat nearby and listened to the cheer after Freddie Mitchell's fourth-and-26 catch.

He sat nearby and listened to the anger and sadness after three consecutive failed NFC Championship appearances.

He sat and watched. He probably thought I was a lunatic (who's to say I'm not?). And, he probably shrugged it off and was there to console me anyway.

After I came home from college, I was much less of a sports fan. I was looking to do whatever it took to be a sportswriter.

Somehow, I got to that point. When I got in late from covering high school football, the dog was there to greet me.

When I hammered away at the keys of the home computer, he rested nearby. Even when the cheers died down and the keys started rattling, the dog remained the same.

As I tweeted about the goings-on of the sports world and what would happen next, he was always in my vicinity.

No longer am I the rabid sports fan I once was. No, those days are probably long gone now (except of course for my Eagles and Hokies). However, I still remain involved, as it's the only thing I know how to do. I just see the games a tad bit differently now.

Much has changed since those days when Sosa did his jump and Vick scrambled around the Superdome. The kid in me changed to an adult.

The allegiances changed from teams to a craft. Instead of jumping up and down after a first down, I merely calculated the distance until they were in field goal range and if the kicker could hit from 53.

The time that I lose touch with as the years roll by remains a mystery to me. I wonder where the years went. I wonder how I grew from that kid into this guy.

Wins and losses, I counted them up. He was undefeated, and I was doing my best to keep up.

All that time, calculated by scores, standings and trophies. For me, that's how I can put the time I had with him into perspective. For over 15 years, I've followed sports every single day. I've watched thousands upon thousands of games in my living room.

Copper was there for more of them than anyone else. And as long as I still watch, I'll save a seat for him too.