Stake.us, the well-known sweepstakes casino site, has been found to have ties with the innovative Kick new livestreaming platform. The relationship was confirmed by the high-profile streamer Trainwreck. However, the link was long suspected, as Stake.us owner Eddie Craven did a test stream on the new casino streaming platform back in November. In a tweet from Craven himself on November 19 this year, the Stake.us owner extended an invitation for Stake fans to join the Stake Kick streaming platform for weekly giveaways and more exciting entertainment. He also added a link to his channel, Kick.live/Eddie.

“Kick.com is a new venture created by the founders of Easygo and Stake.com with new studios in Australia and Europe. Kick Gaming’s vision is to be the leading content provider in the gambling industry thanks to its fresh approach to building top-notch slot and table games available to online casinos worldwide through a single API to its remote game server.”

You’ll also find Xposed on Kick, and more gambling streamers are expected to follow. Tyler ‘Trainwrecks’ Niknam himself had 2.1 million followers on the live-streaming platform Twitch, so making a move to this Stake Twitch alternative had to be a well-contemplated decision.

For more breaking news and in-depth articles, make sure to check out CaptainGambling’s news section regularly and stay up to date with the most recent Stake.us and Kick developments, including the latest on the Stake.us new streaming platform.

Curious to find out more about Stake.us as it embarks on its Kick.com partnership? Then sign up with our affiliate code GBHSOCIAL to get an exclusive 5% rakeback bonus!

Can I bet on American sports in Canada?

As you may already know, online and in-person sports betting is legal ...

Are there any Canadian-based sportsbooks?

Online sportsbooks are set to launch in Ontario in April 2022, with ...

Social Casino of the month 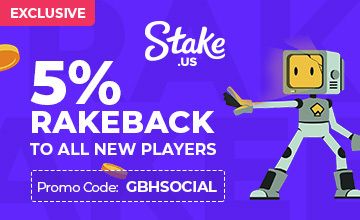