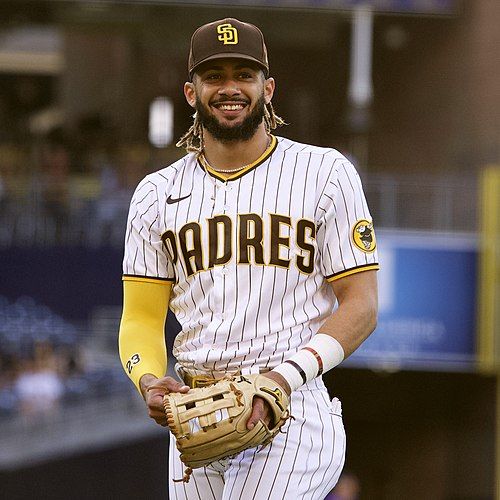 Fernando Tatís Jr. wearing the brown and gold home uniform that was introduced prior to the 2020 season - CC BY-SA

San Diego Padres shortstop Fernando Tatis took his first batting practice of the season ahead of Tuesday's game against the Detroit Tigers. It was the first practice that he attended after suffering a wrist injury.

Tatis had not joined the Padres this season due to a broken left wrist. He sustained the injury in a motorcycle accident when visiting his hometown, the Dominican Republic in the last offseason.

After the upcoming game at Detroit, Tatis reportedly will a rehab assignment in the minor league while waiting for a full recovery. He is expected to return to the big league not long after that.

During batting practice on Tuesday, Tatis’ injury seemed to have recovered. Reporters asked Tatis about his hand, to which he replied, “It felt normal.”

Tatis recorded .282 AVG and 42 home runs in the 2021 regular season. He claimed the third spot in National League's MVP voting despite taking time off mid-season due to an injury in his left shoulder. He only signed with the Padres before the start of last season, with a contract worth $340 million.

Tatis is not the only player currently put by the San Diego team on the injured list. Mackenzie Gore (4-4, 4.50 ERA) was also placed on the 15-day injured list starting Tuesday.

Gore sustained an inflamed left elbow during a game in Detroit on Monday. At that time, Gore's fastball velocity had reduced by more than two mph from the pitcher's season average. The team recalled Dinelson Lamet from the Triple-A El Paso to take Gore's position in the meantime.

The Padres acquired Gore in 2017 through a first-round draft pick. Gore was among the top pitching prospects, but he only made his major league debut this 2022 season. Gore had eight chances to be a starting pitcher for the Padres this regular season. In the first nine games, he recorded 4-1 with a 1.50 ERA.

San Diego recently changed their six-man rotation to a five-man, and Gore got his second straight starting pitch. Before his injury leave, Gore pitched in 70 innings, which are 19 2/3 innings more than he did in 2021. If he continues his pace, he will exceed his minor league record of 101 innings.

The pitcher's name has been brought up several times in speculation related to the Padres' plan to acquire the Washington Nationals Juan Soto. There is a high possibility that the Padres will offer Gore to the Nationals to get the outfielder. It is, however, still speculation until the trade deadline comes next Tuesday.

Soto's future trade has been dubbed as a “potential for a seismic blockbuster deal” by the media. His trade news came out after he rejected a $440 million contract extension with the Nationals. The team then looks for trade possibilities for him.

Adding Soto to a roster might be “game-changing” for the Padres. The player has shown a good record this season despite his team's subpar performance in the league. Thus, the Padres are not the only ones interested in this trade. Other teams have also made inquiries to the Nationals.

On Monday, the Philadelphia Phillies announced the return of All-Star Bryce Harper ...

One of the most prominent players in baseball is up for grabs. ...

After a fierce duel against Julio Rodriguez on Monday evening at Dodger ...