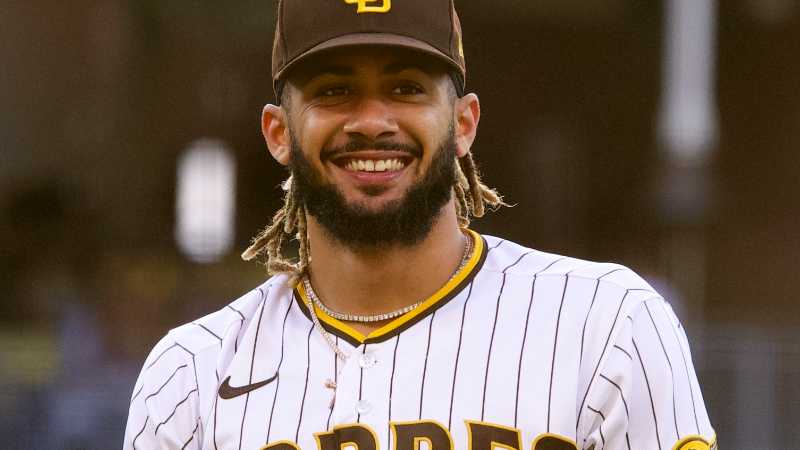 The San Diego Padres announced on Tuesday that they will replace All-Star shortstop Fernando Tatis Jr.'s bobblehead giveaway with a Juan Soto t-shirt inspired by the City Connect jerseys when San Diego hosts the Arizona Diamondbacks game on September 7.

The Padres had planned to give free Tatis bobbleheads to the fans who are attending the game, but the team decided to switch the giveaway following Tatis' violation of MLB's performance-enhancing drug policy, which resulted in an 80-game suspension, according to the Associated Press and ESPN.

Since his stellar 2021 season, in which Tatis hit a league-high 42 home runs, Padres fans have been eager to see him back on the field. But Tatis Jr. had yet to make his season debut prior to Friday's statement because he was recovering from surgery to repair a fractured wrist he had in March after a motorcycle accident. The plan had been for him to return in August, but that has to wait a little bit longer.

Tatis Jr. explained in a statement released Friday that he "inadvertently" took the prohibited substance, which ultimately results in a positive PED test.

Tatis Jr.'s father, Fernando Tatis Sr., who spent parts of 11 seasons in the major leagues, told "The Midday Show" in his native Dominican Republic claimed that his son violated MLB's drug policy as a result of a steroid found in ringworm medication, saying ‘got a fungus due to a haircut’ and used the medication which contains an anabolic steroid.

Although Tatis Sr. admitted that his son was wrong not knowing that the medication contained a steroid, he called it a "catastrophe for baseball." and the Padres superstar's reputation has suffered as a result.

Fernando Tatis Sr: "It was a mistake that could have been handled differently, destroy the image of a player for such a small thing, for a situation like this. Is a catastrophe not just for Tatis Jr, but for all baseball. There’s millions of fans that will stop watching baseball"

Tatis Jr. was given an 80-game suspension on Friday, ruling him out of the Padres' final 48 regular-season games. The remaining suspension period will begin with the start of the 2023 season. His suspension took effect immediately and without pay, which means he will miss the rest of this season and the start of the next.

Tatis said in a lengthy statement released on Friday that he briefly considered appealing the suspension before deciding to serve the sentence, adding that the situation had left him "completely devastated."

Soto was acquired by the Padres from the Washington Nationals ahead of August 2 just before the MLB trade deadline after the two-time All-Star outfielder reportedly declined a 15-year, $440 million contract extension from the Nationals. Soto helped the Nationals win their first World Series in 2019, then hit.351 in 2020 to win the NL batting title.

San Diego was well aware that they were introducing in one of the best players in the game as well as adding Bell, who is having a career year, to bolster a lineup that desperately needed help as they chased a playoff spot. Soto and Bell will most likely play right field and first base in San Diego.