Keith Hernandez says "I am absolutely humbled and proud that my number will be up in the rafters for eternity along with Casey, Gil, Tom, Mike and Jerry," via www.cbssports.com - CC

The New York Mets retired their former first baseman Keith Hernandez's No. 17 on Saturday afternoon, July 9, at Citi Field. Hernandez was the Mets' first captain, and he played his final major-league game in 1990. As a result, the gesture was long overdue and was said to be a top priority for new owner Steve Cohen.

"It's very touching. It's a good moment," Hernandez said before Saturday's retirement ceremony. "I did my speech this morning. I'm a great procrastinator. I woke up, I believe 8 o'clock, 8:30, had coffee, and then I sat down for around an hour, did this speech."

Before their game against the Miami Marlins, the Mets presented Hernandez with various gifts on the field, and Hernandez threw out the ceremonial first pitch from first base. Gary, Keith's brother, caught the first pitch with the same mitt Keith used in the 1986 postseason.

No. 17 joins other retired numbers

"I am absolutely humbled and proud that my number will be up in the rafters for eternity along with Casey, Gil, Tom, Mike, and Jerry," said Hernandez during the ceremony. "Sixty years of New York Mets."

Don Mattingly, the Marlins manager who started at first base for the Yankees while Hernandez played for the Mets, walked out of the visiting dugout during the ceremony to congratulate Hernandez.

The St. Louis Cardinals acquired Hernandez in June 1983, and even though he wasn't a traditional first base slugger, Hernandez was one of the greatest first basemen of his time. He is one of the best defensive first basemen in baseball history, given his.297/.387/.429 (129 OPS+) batting line and 80 home runs during parts of seven seasons with the Mets.

During his three years of dominance with the Mets (1984–1986), Hernandez compiled a batting line of.320/.402/.440 and, of course, led the team to the World Series championship in 1986. Hernandez finished second, ninth, and fourth in the voting for NL MVP in those three seasons.

Hernandez was named to the All-Star Game five times throughout his career, including three times while playing with the Mets. He also won the Gold Glove 11 times (five with the Mets).

He retired with 2,182 hits and 162 home runs in 17 major league seasons, including the 1979 NL MVP award he shared with Cardinals teammate Willie Stargell. In his career, Hernandez had a WAR of 60.3, which is higher than that of several Hall of Fame first basemen, although he was not inducted into the Hall of Fame in his ninth year of eligibility in 2004. In 2000, he garnered 10.4 percent of the vote. 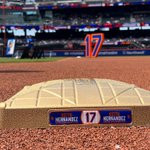 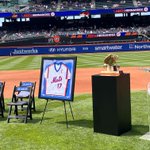 Hernandez has been a color commentator for the Mets on SportsNet New York since the network's introduction in 2006.

Andy Martino
2022-07-08 17:18
Scott Boras has emailed out a packet making the case for Keith Hernandez as a Hall of Famer. Among the points: Every other position’s leader on Gold Gloves on in HOF except Keith. Every other player with 11 consecutive Gold Gloves is in Hall. Statistically best 1b of all time.
2172 1