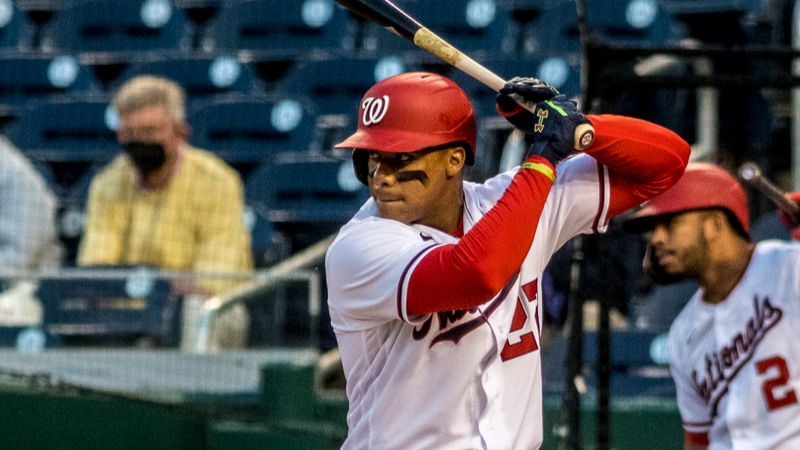 Juan Soto, moments before delivering an RBI single to walk off the Atlanta Braves on April 6, 2021. - CC BY-SA

One of the most prominent players in baseball is up for grabs. Juan Soto's surprising availability could hugely impact the league's trade deadline.

It had been rumored that the Washington Nationals would trade their talented young outfielder. However, no one could have guessed it would happen so soon for a player who is only 23 years old and has two-and-a-half years of control remaining on his contract.

Throughout his five seasons in the major leagues, Soto has been named a Silver Slugger award winner twice and made a pair of All-Star appearances. He is a likely candidate to become the face of the game over the next decade, along with the likes of Vladimir Guerrero Jr., Fernando Tatis Jr., and Ronald Acua Jr.

Unfortunately, the Nationals decided to trade him after the player failed to sign a pair of contract extensions, reportedly worth around $440 million over the next couple of years.

After failing to convince agent Scott Boras, the Nationals told other teams that they were open to trading him. The Toronto Blue Jays are reportedly interested in acquiring the talented young outfielder.

The front office of the organization has shown a willingness to make big moves. After acquiring José Ramirez earlier this year, the team has a lot of prospect capital to spend. Other teams have also shown interest in the player.

According to Jon Heyman of the MLB Network, the Nationals are expected to ask for multiple pieces in exchange for their talented young players. They are also reportedly willing to take on the remaining $60 million of Patrick Corbin's contract.

Despite the potential of a deal, it is not likely that the Blue Jays would be able to complete a trade for the two-time Silver Slugger Awardee. There are a lot of factors to consider, including the impact of the deal on the minor-league system and the organization's future payroll.

The Blue Jays have some of the best young players in the country in their organization, including catcher Gabriel Moreno, infielder Orelvis Martinez, and left-hander Ricky Dempster. Each player has made it to the MLB Pipeline's list of the top 100 prospects.

Given the talent at the major-league level, it is possible for the organization to trade all four of them. The emergence of Danny Jansen and Alejandro Kirk as starting catchers has made it even more likely for the Blue Jays to trade Moreno.

The Nationals' offer for Martinez could be enticing, but competing with the likes of the Los Angeles Dodgers and San Diego Padres is not sustainable. They could also demand the Blue Jays send Groshans or Bo Bichette to the Nationals in exchange for Soto.

The Nationals' current payroll is expected to increase significantly after they trade Soto. In addition, Corbin, with a combined ERA of 5.87, might make over $35 million over the next couple of years.

The Blue Jays are expected to reap around $50 million in 2023 and up to $60 million in 2024. If the organization can assure its payroll will grow, it should not be a problem to land Soto.

The Washington Nationals have announced the trade of superstar outfielder Juan Soto ...