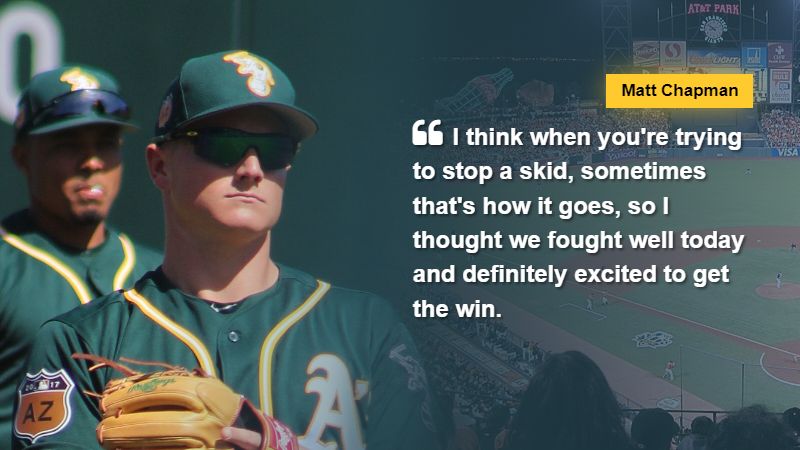 Matt Chapman says "I think when you're trying to stop a skid, sometimes that's how it goes, so I thought we fought well today and definitely excited to get the win." via ABC30 - CC

With shortstop Bo Bichette smashing a game-winning solo home run in the eighth inning, the Toronto Blue Jays shook off a five-game losing streak on Wednesday, clinching a 2-1 victory over the Oakland Athletics.

In addition, Matt Chapman hit another home run against his former team for the second consecutive day. A trade-in in March brought Chapman to Toronto after his first five seasons in Oakland.

Outfielder and centerfielder Ramon Laureano scored a home run for the Athletics. However, the team did not succeed in pulling off its first sweep of the season. In the bottom of the sixth, Laureano hit his sixth long ball of the season to break a scoreless tie.

In the top of the seventh, Chapman hit his 13th, followed by Bichette's 13th an inning later.

''We needed it,'' said Bichette. ''I think when you're trying to stop a skid, sometimes that's how it goes, so I thought we fought well today and definitely excited to get the win.''

''We've played well against the Blue Jays team this year,'' Athletics manager Mark Kotsay said. ''Unfortunately, we didn't get the win today to get our first sweep and to get our season series to win, but we've still got games in front of us.''

''It seems like every time that (Bichette) hits a home run, it's to go ahead or tie a game,'' said Blue Jays manager Charlie Montoyo. ''It was good. Hopefully, that gets us going offensively again.''

''[I was] feeling pretty good,'' Berrios said. ''I was able to go out there and compete and give our team a chance to win, and we did it.''

Athletics rookie Nick Allen played stellar second base defense in the fourth inning. As Bichette led off the frame, Allen leaped to catch a pop-up in shallow right field and snatched the ball to take away a hit. Allen then kept the game scoreless by diving into a fierce one-hopper that stopped Lourdes Gurriel Jr. with two outs and two runners on base.

Toronto pitcher Jordan Romano nailed his 18th save out of 21 chances with a 1-2-3 ninth inning and two punch-outs.

The Oakland starter James Kaprielian held Toronto for six innings until surrendering a home run to Chapman to start the seventh. Kaprielian gave up five hits, four walks, and one strikeout. The start marked his 24th consecutive start of six frames or fewer, which extended the all-time record for the Athletics.

Athletics pitcher Domingo Acevedo gave up his seventh home run of the year and lost for the first time since April 29.

Blue Jays right-handed pitcher (RHP) Kevin Gausman is expected to miss his start on Thursday's game as he was hit by a comebacker on his right foot on Saturday. Gausman has played catch for three days in a row and is likely to start his next game this weekend.

Athletics Frankie Montas underwent a cortisone injection to treat inflammation in his right shoulder. However, no structural damage was found. Currently, he is considered day-to-day and ruled out from the next game. Athletics RHP Dany Jimenez suffered a strained right shoulder and played catch to 90 feet. However, he will need to stretch out further over the next week to 10 days.