US Gambling Sites / 'It is the most ridiculous thing' : MLB commissioner Rob Manfred rejects accusation of hating baseball

'It is the most ridiculous thing' : MLB commissioner Rob Manfred rejects accusation of hating baseball 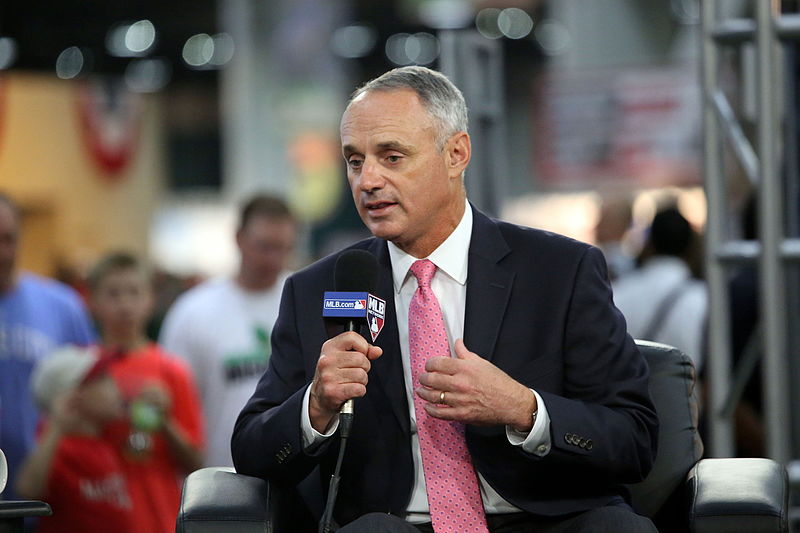 Major League Baseball commissioner Rob Manfred received a point-blank question about whether he hates baseball in a recent interview with ESPN, to which he responded that the claim is "the most ridiculous thing", and the question rubbed him in the wrong way.

He then retold a story of his childhood. When Manfred was nine years old, his father had taken him to watch his first baseball game at the Yankee Stadium. He told the interviewer he loved the game even before getting into the stadium, and his love grew after leaving. Manfred also asserted that "it's the game that matters" and not him.

Although Manfred only took over the commissioner position at the beginning of 2015, he already had a history with the MLB. As a lawyer, he was included in the MLB's negotiating team during a player's strike in the 1994-1995 season. He was also a staff member when Bud Selig held the reign.

There have been talks about Manfred in the past years in the baseball community. Fans questioned his handling of some league matters, including the Houston Astros' infamous cheating scandal back in 2017. Many fans voiced their disagreements over his decisions at that time.

Fans of the league also show their disapproval toward Manfred for his attitude in public. He had made several problematic statements in the past. For example, he stated in 2020 that the World Series trophy is just "a piece of metal". It caused an uproar on various social media platforms. Manfred expressed his regret over that statement saying that "it's disrespectful to the game".

Manfred also caused another public outcry at the beginning of this year's regular season when he announced the unfortunate cancellation of two opening series with a grin. Manfred reasoned that he was smiling at a reporter approaching his stand at that time, but the statement failed to quell the outrage.

In a more recent instance, Manfred proposed changes in baseball rules related to ghost runners and pitch clocks. He suggested the change to turn baseball into a more fast-paced game. Baseball fans are notorious for disliking changes. The proposal met rebuttals to which Manfred replied that when someone insinuates that something is wrong with the sport, it immediately turns them into "a hater of baseball".

Manfred asserted that he was trying to revolutionize baseball instead of ruining it, adding that he was pushing to make baseball games more interesting to watch, which according to him, would see more people joining the community and baseball return to its glory.

MLB's plan to expand under Manfred

Manfred has shown his intention to expand the league in the near future. The 63-year-old commissioner has not given a clear timeline, but he previously had said he was looking to add two more teams to the league. Among the strongest candidates are Nashville, Charlotte, San Antonio, Austin and Orlando.

Robert D. Manfred Jr. is an American lawyer and business executive who is the tenth and current Commissioner of Major League Baseball. (wikipedia)

Major League Baseball is a professional baseball organization and the oldest major professional sports league in the world. As of 2022, (wikipedia)

Angels’ Archie Bradley Placed On IL After Brawl Against Mariners

The Los Angeles Angels had to place their reliever, Archie Bradley, on ...

There is a new development regarding a feud between Tommy Pham, an ...

Chaos marred a match between the Los Angeles Angels and the Seattle ...

The Atlanta Braves won 5-3 against the Los Angeles Dodgers on Saturday ...