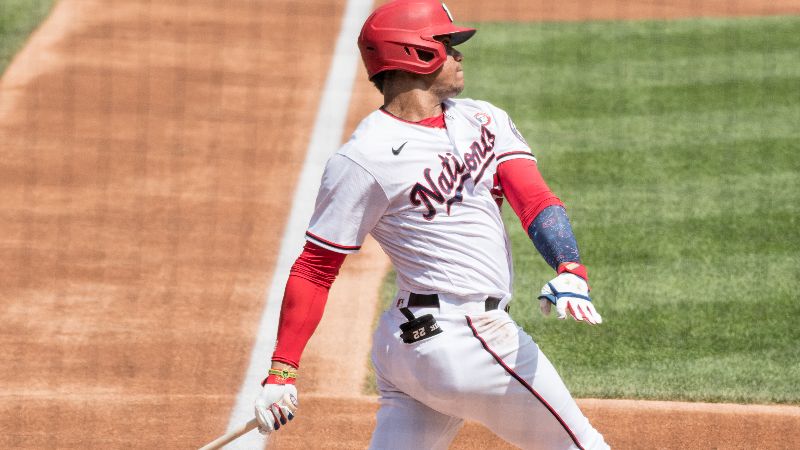 Rodriguez led at first when he took Pete Alonso in the second round by surprise with his 31 home runs against the reigning champion's 22. Meanwhile, Soto struck 16 home runs that round, defeating Albert Pujols' 15.

"As a longtime Mariners fan, this felt like the official arrival of Rodriguez on the national stage, even if Soto beat him out in the end," said ESPN's David Schoenfield.

A few months away from being 24, Soto is the second youngest player ever to win the Derby and the first Dominican-born champion since Robinson Cano in 2011. Bagging 53 home runs in total this season, Soto is only the second Washington Nationals player to win the championship after Bryce Harper in 2018.

"Perhaps nobody in the world does it as well as Soto, the Washington Nationals star who, upon turning down a 15-year, $440 million contract extension, recently found himself in the middle of rumors about his present and future," wrote ESPN MLB expert, Jeff Passan. "It's a mountain Soto climbed as a teenager and has codified as a 23-year-old."

The future for both players

Before the game, Soto was deep in trade rumors right before the All-Star break. Soto found out that his hometown team will potentially trade him over the next couple of weeks and he channeled that disappointment into home runs.

"Right now, I'm not even thinking about it," Soto said about the rumor after having the Home Run Derby championship chain placed around his neck by Puerto Rican rapper Bad Bunny. "I'm thinking I'm a champion."

Soto is talented but Passan said that it is "unlikely" that he came prepared to win the derby. Passan added that Soto's sudden uprising reminded Rodriguez that "there's a long way to go until the Mariners outfielder can call himself the best young player from the Dominican Republic".

The rookie Rodriguez lost his chance as he hit just one homer short from Soto's. The 21-year-old phenom bashed 32 homers in the first round and 31 in the second but he looked a bit out in the final. However, fans remain hopeful.

"Rodriguez's first round of 32 home runs was spectacular, and when he raised his arms in triumph, it wasn't just a moment for him or even Mariners fans," said Schoenfield. "It was a moment for all baseball fans: The game's next great star is here."

Brought down by Soto by 1 homer difference in the second round, Pujol closed his final baseball season with pride. The oldest player to ever compete in the Derby and an unlikely favorite in this stamina contest, Pujols managed to defeat Kyle Schwarber's 19 homers with his own 20.

"He hasn't been, well, Albert Pujols, because his bat speed is no longer quick enough to adjust to the cartoonish velocities of today's game; it has nothing to do with his raw power. He knows this event, having competed in the first timed derby in 2015," said ESPN's Alden Gonzalez.

The legend was surrounded by the All-Stars just before the final 30 seconds of his MLB career, including Soto who reportedly fanned Pujols off with his cap.

"It was an organic moment of appreciation as Pujols winds down his final season in baseball," said Gonzalez. "Through the years, all of them got advice from Pujols as they matriculated to stardom."

A weekend of new series kicks off on Friday with the best ...

Saturday gets going with a great set of games with multiple teams ...