The MLB 2022 All-Star Game will take place at Dodger Stadium in less than two weeks on July 19. As of Friday, 8 July, the league has completed the fan vote and announced the 2022 MLB All-Star Game lineup.

14 different franchises were represented between this year's selected starters led by the Toronto Blue Jays, Los Angeles Angels, New York Yankees and Los Angeles Dodgers with two All-Star starters each. Furthermore, pitchers and reserves for both teams with a total of 24 players for each side will be determined through the Player Balot and selection made by the Commissioner's Office.

Mark Feinsand
2022-07-08 23:34
The @MLB All-Star starters have been announced. There are five first-time starters, four second-timers and five third-timers. Judge, Altuve, Harper and Trout are the only players with four or more starts. There's so much good, young talent in the game today. https://t.co/m1qnaU0SFf 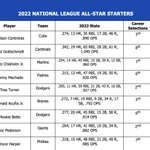 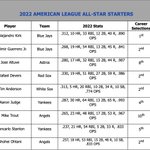 2B: Jose Altuve from Houston Astros

DH: Bryce Harper from Philadelphia Phillies, is injured and will be replaced.

Adding players in the draft

The selection of the All-Star Game starter is usually the first confirmation for the players on the roster. MLB, on the other hand, conducted things a little differently this time.

Judge and Ronald have accepted the starting position as the primary voter in the first stage of the process. This vote was Judge's fourth career and Ronald's third. Additionally, Trout also led the field with a 10th career All-Star selection followed by Paul and Altuve in their eighth career.

Furthermore, the new thing presented by MLB is related to collective bargaining. The most recent collective bargaining agreement says that commissioners can choose to add one player to each roster. This is done in order to recognize the career achievements of each player.

This agreement allows Rob Manfred as MLB commissioner to add one player to each roster. Previously, Manfred had named Albert Pujols and Miguel Cabrera to the All-Star roster.

This year, Pujols and Cabrera will end their careers. Pujols, who has hit a record 445 home runs and 1,329 RBI in 1,705 games with the Cardinals, will return to the Cardinals and plans to retire after this season. While Cabrera, who has won seven All-Star selections, two MVP awards, and five Silver Slugger awards will retire after his contract expires after the 2023 season.