Check out our leaderboard of the best fantasy soccer sites. Each o these sites is awesome, but keep reading to see which is best for fantasy soccer!

There are countless top quality fantasy soccer sites out there today. Each of them will have their own pros and cons attached to their offering. Some will perform better in certain areas than others. Some of the key variables to look out for with these operators is the design of their platforms, its usability, the level of analysis and data they offer, as well as how good their mobile offering may be. When you consider each of these aspects, then you can make an educated decision on which platform is best suited to your specific needs and preferences. Here is a list of 5 of the best fantasy soccer league platforms in the space today.

Fantasy soccer or fantasy association football is extremely popular across the world. The first iteration of this game was developed in England, the home of soccer. This was made by an individual known as Bernie Donnelley on the 14th of August 1971. Over the years, it has evolved into a big business for online platforms. There are many amateur clubs now trying to adapt this model and to create their own internal fantasy soccer leagues for their own leagues.

It was in the 1990s that English newspapers began to embrace fantasy soccer. This was extremely popular for the newspapers, with people racing to get the papers in the weeks leading up to the start of the season so they could get their fantasy teams finalized. There would be a large prize on offer for the winner and the few runner ups.

With the advent of the internet, these platforms began to go online and made it much easier to update team standings and get access to all different types of relevant info. Now the European fantasy platforms are looking to copy the example set by the fantasy sports platforms in the US that now offer daily fantasy games. A lot of players in the traditional format of playing for an entire season would have a large drop off in interest after a few weeks.

People would see their teams facing insurmountable leads and they would give up. However, the daily or weekly model means that right throughout the season they will have an interest as they can constantly start fresh if they want to instead of having to wait until the start of the next season. Our fantasy soccer tips might help you to raise your chances.

Fantasy sports is a massive business that is worth billions of dollars. It is a great way for sporting enthusiasts to get even more engaged with their favorite sports. Fantasy soccer is extremely popular across the world, with the sport being the most watched sport globally.

There are countless quality platforms where you can participate in leagues for free, as well as paid leagues. You can join a league with your friends and battle it out to see who comes out on top at the end of the season. Alternatively, you can enter public leagues where you can compete with others on a daily, weekly or season long basis.

Most states now in the United States and Canada allow daily fantasy sports, with only a few still resisting. It is a tier down from sports betting. Now that the federal ban on sports betting came to an end in May 2018, many states are starting to legalize sports betting in their regions. The likes of fantasy kingpins DraftKings and FanDuel are now getting heavily involved in the sports betting space. This is a sensible move as they already have a lot of expertise in the sports world, as well as having an existing user base with which they can quickly translate over to their sportsbooks.

Just like any type of fantasy sport, there are going to be plenty of different strategies. However, there is not a single strategy that is a one size fits all fix. It is best that you formulate your own strategy and you remain adaptable enough along your journey when certain opportunities arise. For example, if you get the chance to pick up a player that has a great value but your strategy says you should not be making this move, sometimes it pays to take the value and deviate from your plan.

If it is your first time partaking in fantasy soccer or you need a bit of a refresher, then it is important that you get the basics down before you worry about more complex strategies. Every league is different, so make sure that you know the scoring system and selection process that is specific to that platform. The key is to have a balanced team right across the pitch in numerous positions. A big mistake a lot of people make when they are drafting players is that they are very cheap when it comes to defenders.

This is a mistake because defenders can consistently be a good banker for points week in week out. The ideal formation to maximize the points you earn will be 3-4-3. The position you should proportionally spend the most is in midfield. This is because these players on average score more points than other positions. Wingers are generally going to score more points than central midfielders, the same goes for wingers scoring more than full backs. Fantasy soccer apps can help to stay up to date where ever the player might be at the time.

Keeping an eye on values

The value of your players is going to change throughout the season depending on how they perform. Your first few picks should be players that are nice and dependable. These will be the backbone to your team that you can rely on consistently racking up the points for you. As your budget gets relatively smaller, you can then use the money for long shots and sleepers. This is the are in which your research and analysis will pay off the most. Usually, good value players are those coming from recently promoted clubs.

Those coming to the English Premier League for the first time from overseas leagues can often struggle and will be overpriced. Therefore, these players are often times better off avoided. When it comes to making transfers, make sure that you are basing your decision on logic. You don’t want to commit a decent amount of your budget to a player that is just a flash in the pan and only has a couple of good games before descending back into mediocrity.

As artificial intelligence and machine learning continue to develop rapidly and become more advanced, there are countless different applications they can have. One of the applications some people are using these emerging forms of technology in their fantasy soccer leagues. Data science and a Moneyball-esque approach to sports is something that has become more and more popular each year. There has never been more information and data out there about players and teams. Advanced systems can now run in-depth statistical analysis on players and teams using different types of algorithms. Some of these programs have been shown to be very much effective when it comes to performing well in fantasy sports. One party conducted an experiment over the course of a season using one of their algorithms for Fantasy Premier League. The results were certainly interesting.

The algorithm managed to defeat the average fantasy Premier League player by 132 points over the course of the season, which is a 16.25% increase over the average. According to their research, the reasons for their poor performances over the years when not using these models was that they were subconsciously using their favoritism for teams and trend of buying overpriced payers to hurt their performance for the seasons. This is certainly an area which will be looked at more closely in the coming years for all fantasy sports, especially because there is now large money on the line with a lot of the paid platforms.

Are there any welcome offers available as part of fantasy soccer platforms?

Most of the free to play fantasy soccer platforms will have no welcome offer for new signups. However, the likes of FanDuel do. You will be able to get a $5 free play to one of the daily fantasy games on the platform. Your first $5 or $10 game will be 100% covered under a money back guarantee in case you lose. Therefore, there is no risk involved on your part.

Are there many leagues to choose from for fantasy soccer?

The main league that will be used for fantasy soccer is the English Premier League. This is the most popular league in the world. However, there are other leagues on offer, such as for the MLS, La Liga in Spain, the Bundesliga in Germany, the Champion’s League in Europe, the Mexico MX Liga, as well as having fantasy leagues for international competitions such as the World Cup and European Championships.

Can you have more than one fantasy soccer team?

On the free to play platforms, generally you will be sticking with the same team, but you are able to enter numerous leagues with it. For the pay to play platforms, you can usually create a different team depending on the specific league you are entering.

Can you play fantasy soccer on your mobile device?

Most fantasy soccer platforms today will have some sort of mobile offering for you. Some of these will just be through your mobile web browser, but the leading platforms have a dedicated app you can download. This has a myriad of features, including allowing you to change and update your team.

What happens if a player changes team?

Conclusion: What are You Waiting For?

Fantasy soccer is massively popular, which is no surprise because soccer is beloved across the globe. There are many different types of leagues you can create fantasy leagues for, depending on your preference. The most popular is the English Premier League.

You have a great selection of fantasy soccer platforms to choose from. There are dedicated free to play platforms or those where you have a choice between a paid league and a free league. A lot of fantasy players are earning nice profits from the paid leagues. If you feel like you have what it takes to succeed, then sign up for an account today. 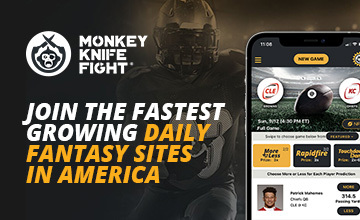 Fortune Coins Bonus
1,000,000 GC + $40 FREE Coins
T&Cs apply
9.6/10
Go to Casino Bonus Comparison
Latest News
March Madness Preview and Betting Guide
The NCAA basketball tournament is almost here!, and ...
Rush Street Interactive Secures Market Access in Three Additional States
Rush Street Interactive, the digital arm of Rush ...
Private: Will there be taxes on online sports betting in Ontario?
Big changes to Ontario sports betting are coming ...
Private: Will I need to make a sports betting account separate from my DFS ac...
With Ontario sports betting set to launch in ...
Can I bet on American sports in Canada?
As you may already know, online and in-person ...
State Sportsbook Finder
Get the latest updates in Sports and Casino via our Newsletter